America's last land rush was unleashed from Caldwell in 1893. But June 3, 2005, marked the start of a modern rush, as 24 teams of filmmakers competed against one another to stake a claim of their own ... for a place in local cinematic history.

Though the Wild West Film Fest's debut takes place today, its true beginning was a week ago. It wasn't signaled by a gunshot, but by the release of the secret criteria: All entries must begin with the phrase, "What are you doing here?" and include a landmark from Kansas or Kansas City, Mo. Filmmakers then had just the weekend to plan, shoot and edit their six-minute films before the submission deadline last Sunday.

Chris Dorsey, founder of the festival and a seasoned filmmaker, knows quick shooting can still hit a bull's-eye.

"It motivates people to create. Rather than broadly saying, 'Let's go out and create a project for the Cannes Film Festival,' it enables people to commit a couple of days to putting a project together," Dorsey says. "When they're forced to edit it down, it means they are just going to leave the most important parts, and the best parts. I think it actually helps a lot of people."

The artists seem to agree. Isley Enruh, of Lawrence, says, "We all had a blast. The energy was pretty high because of the deadline. I didn't see it as a hindrance." 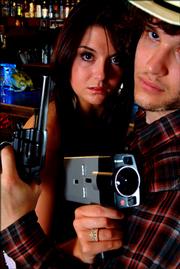 Tim Nauman/Special to the Journal-World

Do not be fooled by its name, because the Wild West Film Fest is not just for westerns - all "six-shooters" are game for this showdown. Dorsey invented the title to fit with stereotypes about Kansas and emphasize the chaos that timed filming can generate. The main push was to showcase Kansas and its talent.

"The control factor is that everybody has the same thing. People went in completely different directions," Dorsey says. "Most of them are comedies, and usually that's the way it goes. But there are a few dramas, dramatic thrillers and also a shoot-em-up thriller."

Dorsey chose Lawrence because he feels the city has great potential for creativity.

"Lawrence has a lot more potential to be unified," he says, comparing it to K.C. "(The artists) are all looking for something to tie them together. Maybe this will inspire people and motivate them to go out and create."

Enruh was one such filmmaker galvanized by the festival. A philosophy major from KU who graduated in 2003, he describes himself as "a big film buff." Though he's always wanted to get into movie-making, there was never enough motivation.

"This film fest was the impetus," Enruh says. "It really inspired me to get off my butt and get a camera."

The short movie that the fledgling director edited at home is titled "The Betrayal," and it allowed him to discover a gem of local history. 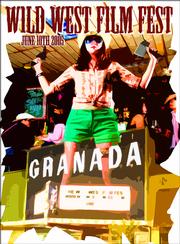 Searching for landmarks around Lakeview, Enruh discovered a weathered weigh station next to the train tracks. After some time searching, he came face to face with 89-year-old Danny Brune, who owns the station and the land it sits on. Coincidentally, Brune reports the station was once owned and operated by Paramount Studios, which possessed several thousand acres and used the station to weigh produce trucks.

What crop does a movie company need thousands of acres to produce? Why, popcorn, of course.

Dorsey is particularly proud of the celebrity judging board that signed on. It includes Dee Wallace Stone, a Kansas City, Mo., native most recognized as the mother in "E.T.," "Cookie's Fortune" editor Abraham Lim and KU film professor Kevin Willmott.

All entries will be judged on a gamut of customary characteristics. These range from the technical aspects such as cinematography, editing and acting, to the creative, like cleverness and originality, with one final blanket "enjoy-ability" category.

Whatever one's style, the Wild West Film Fest aims to please. In addition to the screenings, all proceeds benefit Habitat for Humanity of Lawrence and tickets include an after-party performance by indie rock band The Girl is a Ghost.

"It's gonna be a good party," Dorsey says. "I planned it so we're going to draw people in who aren't big film festival fans. I've never been one, and I'm involved in film and video. These are all six-minute films, so it's short-attention-span theater. It's fun because you know what these people were put up against and the time frame they had to make their projects."