The second GBA gyroscopic effort doesn't quite hit the mark

If you're a parent who wants to keep your children from swearing, don't get them Yoshi Topsy-Turvy. The game lasts about three hours, but it was certainly long enough to make me utter enough expletives to fill a couple seasons of "South Park."

Yes, Yoshi Topsy-Turvy is annoying. Extremely annoying, in fact. It starts out deceivingly enough, simply making you eat a certain number of apples before reaching the goal at the end of the stage. You're slowly introduced to some of the things you can do using the tilt sensor built into the cartridge. By moving the GBA (or DS), you can tilt the environment to allow Yoshi to walk up walls, ride sliding platforms and aim cannons, among other things. It seems like a fun little gimmick for a little bit, but things change quickly and only get worse. Somewhere around the middle of the second world, you get a palpable sense of "This is going to get really annoying, really fast." It does.

The story is simply inane, and there's really no effort made at all to make it even remotely interesting. It involves a character named Hongo, the "great spirit" of a forbidden book. He attempts to lock Bowser within the book, and somehow locks up all of Yoshi's Island along with him. Naturally, it's up to Yoshi to somehow save his island. This is told at the beginning of the game, and it seems the developers simply forgot about it as the game progresses. You barely hear of the Hongo character again, and there's really no explanation of what is going on. Any between-world scenes are short and usually consist of Bowser saying something like "Bwa harf" (Yes, that's an actual quote from the game). 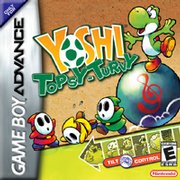 Graphics are in the same vein as the SNES classic Yoshi's Island, filled with coloring-book-style backgrounds and pastel colors. Surprisingly, while the style is similar to Yoshi's Island, the actual graphics look far worse in Topsy-Turvy. The vivid colors of the SNES game are terribly watered down, and the look isn't nearly as sharp. Sound effects and music are typical Nintendo fare, although noticeably less inspired than usual in the music department.

There are six worlds, each with a varying amount of small levels within them. At the beginning of each of these levels, an objective will be set for you. These objectives are given to you by six different spirits (The Spirit of Cuteness, Greed, Fright, etc). If the level icon features the Spirit of Greed, that means you'll have to get a certain number of coins before reaching the end of the level. Other spirits will have you collecting apples, beating the level under a set time, killing enemies, or -- in some cases -- not killing enemies in order to progress. Later worlds will consistently feature double objectives, such as "Beat the level in under 90 seconds and get 75 coins".

This all sounds decent, right? Well, while the core concept of the game may not be terrible, the execution is severely flawed. The gimmick is the built-in tilt sensor, and it's far inferior to the one seen in Warioware Twisted. While the sensor in WW:T featured a wide range of motion, the one in Yoshi simply senses Left, Right and Center. Most of the action is based around this motion sensor, and the fact that it doesn't work well really kills any chance of enjoying the game.

You'll use the sensor to do certain things within the level, such as unrolling carpets or sliding down slopes. Jumping from vertical wall to vertical wall is a necessity at certain points in the game, and it's extremely hard to pull off. It doesn't help that Yoshi himself is pretty unresponsive, being capable of only eating things, ducking and flutter jumping. Yoshi's old ability to morph is back, but these sections of the game are often even more annoying than the rest. He can morph into a balloon, a boat and a bouncy ball. The balloon actually works well, as you simply float him down into coins and away from obstacles. The bouncy ball features some awful control, and the direction you end up going seems almost random in nature. Controlling the boat is atrocious, and I ended up falling off the screen in about half of my attempts. Both the ball and boat sections would have been helped exponentially if there were more than three possible angles in the sensor.

Perhaps the games' biggest fault is the ridiculous amount of spikes. In the last few worlds, it seems like the ground is made of nothing but Instant Death Spikes. They become an exercise in awkwardly tilting the GBA in order to avoid falling to immediate doom. This may seem like nitpicking, but I challenge anybody to play the last few worlds without dying on spikes at least 20 times.

Outside of the primary levels, there are two boss fights and some bonus minigames. The minigames usually consist of you blowing up bombs or catching coins in a bucket. The first boss fight with Bowser is simply confusing, and it's extremely unclear what you're supposed to do. The final boss fight is actually one of the better parts of the game, and reminded me a bit of the Mouser fights from Super Mario Bros. 2. You basically have to roll or float bombs into Bowser with the right timing. This fight proved to me that the game would be at least a little more enjoyable if there was a boss fight at the end of each world.

All in all, there is extremely little fun to be had with this title. It quickly becomes tedious and frustrating, and you'll find yourself forcing yourself to keep going. The entire last half of the game is horrible and will more often than not make you want to throw your Game Boy out the window. There's some decent ideas here and there, but they're immediately void thanks to the unresponsive controls and motion sensor.