You do not want to meet Tyler Rea in a dark alley.

Wrapped in a sarong, a tiger-claw blade extending from each clenched fist, he is the picture of focused ferocity.

Rea, 34, is trained in the Indonesian martial art of pentjak silat, a stunningly efficient system to kill opponents using a claw-blade defense.

So the Lawrence resident knows just where to cut attackers (go for the femoral and carotid arteries) in order to bleed them dry in seconds.

Or, if he had to, he could just chop off your head.

"I've been using traditional Indonesian weapons for the last 12 or 13 years," says Rea, who teaches various martial arts and basic self defense to about 40 students.

Aside from being deadly with the tiger-claw blade, called a karmabit, Rea is also a master with wu dip wo, or Chinese butterfly knives.

He's spared no expense in pursuit of his passion.

Tyler Rea, a martial arts instructor, demonstrates the use of butterfly swords.

"I'd say the total I've spent would be around $8,000 for my Indonesian weapons and probably close to $4,000 for my Chinese weapons," he says.

Yes, Rea is a guy who's really into sharp objects.

And he's not alone in Lawrence.

While no hard figures exist tracking the trend, the city is home to a devoted group of what might be called "blade enthusiasts" - people for whom just one knife (or sword, dagger or scimitar) is never enough.

People like Sherry Loveland, 36, a graduate student in anthropology at Kansas University.

She's spent hundreds of dollars through the years on her collection of nine kinds of sharp weapons.

Loveland is a member of the Society for Creative Anachronism, folks who are dedicated to researching and recreating medieval society - including plenty of swordplay.

"Blades are just beautiful," she says. "They glint in the light. They make you feel strong and graceful when you know how to use them."

Hollywood movies have created scores of blade enthusiasts who are wowed by the daring swordsmanship depicted onscreen. It's a proud tradition that stretches from pirate films and old "Zorro" and Errol Flynn movies all the way to Quentin Tarantino's "Kill Bill" flicks of 2003 and 2004. If you're turned on by the sights and sounds of flashing steel, here are some movies that are bound to hit the target: ¢ "Pirates of the Caribbean" ¢ "Crouching Tiger, Hidden Dragon" ¢ "The Last Samurai" ¢ "House of Flying Daggers" ¢ "Hero" ¢ "Lord of the Rings" trilogy ¢ "Kill Bill," volumes I and II ¢ Star Wars series (lightsabers)

Home base for lovers of all things pointy (and potentially lethal) in Lawrence is The Sacred Sword - A Cutting Edge Spiritual Center, 732 Mass.

Gary Shainheit, a native of the New York City area, opened the 2,500-square-foot store in August 2003.

While he offers customers a variety of New Age products and therapies, his specialty is tempered steel - preferably sharp and long.

"I'm the 'sword guy' of Lawrence," he says. "Anything that has a blade attached to it, I sell."

On any given day, the store has about 200 different kinds of blades - everything from short and brutish daggers to graceful, curving katanas (Japanese long swords of the type used in the "Kill Bill" movies).

One customer, a visitor to Lawrence from Los Angeles, saw a particular sword in Shainheit's window and instantly shelled out $500 for it.

Shainheit says he doesn't have a "typical" customer.

"I've had kids at 8 and 10 years old who are part of a family of collectors, and people who are 50 or 60 and have been collecting all their lives," he says.

But half of his sales of swords and other blades are to men in the 18-25 age range. 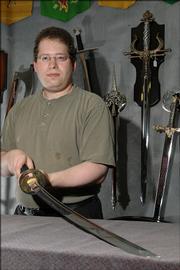 Sacred Swords owner Gary Shainheit possesses a variety of swords, from the Japanese katana he is holding to the fantasy swords and broadswords behind him.

Enthusiasts snap up his shiny wares for different reasons.

"There is a large clientele that follows my belief that it's three-dimensional art. Put it on the wall, it looks pretty. It's cool, no different than a sculpture or a canvas painting," Shainheit says.

"There are also people who want them for specific (martial arts) training practices. They're more of a practice tool, not a weapon. They have no desire to hurt anybody."

Still others, like Loveland, buy swords and daggers to complement their medieval costumes for role play at Renaissance fairs and other gatherings.

Another major influence on the sword trade is film.

Movies like "The Last Samurai," "House of Flying Daggers" and, especially, the "Kill Bill" flicks - all of which glorify swordsmanship - inspire droves of blade enthusiasts.

Shainheit has an especially hard time keeping in stock replicas of the katanas featured in "Kill Bill": the bride sword wielded by Uma Thurman, and the Bill sword used by David Carradine.

"This design is very cult-like," he says. "People want that piece of the film. They want to buy the T-shirt, a poster."

He first became interested in swords when he was only 5.

"That's when I started watching all those old Zorro movies and thinking, 'Wow, look what that guy can do,'" he says.

"'The Last Samurai' was probably the one where I just said, 'I HAVE to have one.'"

Loveland says there are many Lawrence-area residents who share her love of steel weaponry.

"Oh God, yes. There's those of us who are weird, and we're into the history of it. There's people like sci-fi and fantasy fans - they really want to own the blade that Highlander (a film character) carried, or somebody in a movie they really loved," she says.

"And I'm not sure why, but young men around the age of 16 just get this burning urge to own a blade. I think it's kind of a rite-of-passage thing."