The first true game tailored for the DS hardware.

The Nintendo DS has been out for quite some time now, yet owners of the system have only been served about three games of any real significance: Mario 64 DS, Warioware Touched!, and Yoshi's Touch and Go. With the release of Kirby Canvas Curse, DS owners finally have a game that delivers on the capabilities of the system in a full single-player experience (rather than collections of microgames such as in Mario and Warioware). It's the type of game that can only be possible on the DS, and is hopefully an indicator of things to come for the system.

Players will only need to use the stylus to control Kirby, and all of the action is shown on the bottom screen. The top screen serves as a map, as well as a display screen for stats such as health and lives remaining. Most of the gameplay revolves around the player using the stylus to create rainbow paths for Kirby to follow. Naturally, these lines will help him avoid hazards such as pits and spikes, but they can serve other purposes as well. For example, if there is a laser blocking Kirby's path, you can draw a line through the beam to block it. The same method can be used for deflecting cannon blasts, fireballs, and other hazards. You have an "ink meter," but it automatically replenishes and is rarely a problem. The lines you draw disappear extremely quickly, so it forces you to be very quick with your actions. 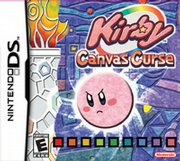 To actually move Kirby, you tap him with the stylus to roll him forward. Directly after tapping him, he can take out enemies he comes into contact with. These enemies can also be incapacitated by simply tapping them, allowing Kirby to easily get rid of them. The unique nature of the control takes some getting used to but is never a problem. Kirby's ability to copy enemy skills is back, although it's not quite as useful as it was in the older titles. There are several different abilities, including beam shooting, turning into wheels and stones, and freezing enemies. It's more than a novelty than a required gameplay mechanic, although there are certain blocks that can only be destroyed by corresponding abilities.

When you look beyond the method of input, the game bears a resemblance to several old-school platformers. The basic level designs and gameplay seem to have borrowed fairly heavily from the Sonic the Hedgehog series, and there's several Donkey Kong Country-style cannon segments. While inspiration may have come from older games, the gameplay in Kirby Canvas Curse seems entirely fresh thanks to the use of the stylus.

The game features some truly fantastic art direction, especially in the look of the backgrounds. Every level seems inspired and unique, and the graphics show a high level of visual polish. Sound effects and music are among the best heard on the DS so far, and are right up there with any Nintendo-produced title. Music fits the levels very well, and there's even some remixes of classic Kirby tunes. 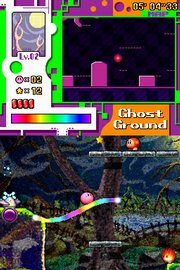 As is the case with many portable games, Kirby Canvas Curse is fairly short. The main game shouldn't take longer than four hours to complete, but the title makes up for it with a wealth of different modes, minigames, and collectibles. After many stages, you get to play the "Dash Jump" minigame. This features the player tapping Kirby as quick as you can to build up speed, then drawing a ramp to launch him as far as possible. Boss fights are handled well, and you get to choose what order you complete them in. After a three-level world, you get the decision to play a pinball-style boss fight, a race or a "follow the leader" drawing boss. Each of these three boss fights features entirely different gameplay from the levels, and all of them are fun. After defeating a boss twice, you can play their level at any time from the main menu. There is also a "Rainbow Run" game mode, which features two different trials: Time and Line. Time trial works exactly how you'd expect, by making you go through levels as quickly as possible. The objective in Line trials is to beat the level while using as little ink as possible. This can be very challenging at times. On top of these modes, there is also a huge number of special medals to collect scattered throughout the levels.

All in all, this is the type of game you bought a DS for. It truly utilizes the system's abilities without compromising gameplay quality in the least. There are some spikes in difficulty later in the game, but nothing insurmountable. While short, it offers enough incentive to play through more than once, and the minigames are just as good as the main single-player mode. A must-buy for DS owners.