Chiggers
Non-native Kansans may not recognize chiggers as the tiny bugs that embed themselves under your skin when attracted to your moist folds of skin and areas with tight-fitting clothing.

The best way to prevent the wrath of chiggers is to employ a blanket between you and the ground. DEET-based repellants, as well as natural preventives like citronella, patchouli and sulfur add a further layer of defense.

Although the pubic louse, right, can make you a sad sack, it's the glorious chigger that makes the midwestern experience truly memorable.

Most importantly, don't scratch them. If you start bleeding, the plasma in your blood attracts more chiggers. For small infestations, you can cover the affected area with clear nail polish to suffocate the bastards. If you have so many that it's impossible to remove them, try bathing in oatmeal and take Benadryl for discomfort.

Ticks, left, lay thousands of eggs and transmit the widest variety of pathogens of any blood sucking arthropod. Also hilarious was the short-lived animated series "The Tick."

Ticks
Ticks are almost impossible to prevent in these parts. But, with vigilance, you can keep them from becoming too firmly attached to your skin. Immediately after returning from wooded areas or sitting on the ground, thoroughly inspect your entire body for the bastards. Leaving ticks on your body for an extended period of time could lead to a lifetime of illness. Dogs are also vulnerable to ticks, and you should regularly check them as well.

To remove a tick, grasp the tick close to the skin - if you squeeze the top of the tick, you could inject more toxins into your body - and carefully pull directly away from the skin. Resist the temptation to pull too hard or twist more than a few degrees - if you leave the head in your skin it can become the source of week-long irritation. Some folks recommend pouring whiskey, etc. on the tick prior to removal (these people are idiots). After removing, kill the sumbitch with a lighter. Or a gun. 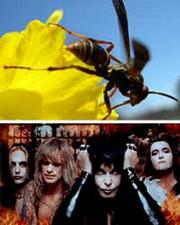 Wasps, top, and W.A.S.P. can both be dangerous if they become trapped in your hair.

Treat bee stings with a paste of baking soda and water to neutralize the sting. You can also apply a cloth soaked with Dr Pepper, which, miraculously, takes care of the inflammation.

Poison Ivy
The size and amount of poison ivy at Clinton Lake Park has increased dramatically in recent years. The wisdom of old - "leaves of three, let it be" - still applies. Other indicators include jagged, saw tooth edges and a somewhat waxy look. The color can vary.

If you come into contact with poison ivy:
The goal is to get the plant's oil off of your skin. You can't use soap because most contain fats and oils that will seal in the poison ivy. It's best to use cold water, as hot water will open your pores and cause the oils to seep in. You can also use mineral spirits, nail polish remover or any petroleum solvent.

Left: The deadly copperhead. Right: The delicious Copperhead Pale Ale from Lawrence's own Free State Brewery. Both will bite back if abused.

Snakes
Only one person in Kansas has died from a snake bite since 1950. While there are several types of snakes on the Clinton Lake Park property, only two are venomous: the timber rattlesnake and copperhead.

Snakes usually avoid human traffic, but on cooler nights, you will commonly see the snakes on asphalt and concrete to stay warm. Also, after heavy rains, the snakes abandon their lakeside rock homes in favor of drier land.

If you should be bitten:
1. Take note of what the snake looks like. This will help a doctor treat you, if necessary. Don't try to capture the snake because that gives it another chance to bite you. You're delicious.
2. If the wound is bleeding, don't try and stop it. Blood flow will help push out the venom. If you try to treat it, you could push the venom back in.
3. Wash and cover the wound. Then go to a doctor.