Majesco did no wrong in promoting and publishing Glyphx's Advent Rising. Donald Mustard's long-awaited ambition was finally seeing the first part of an expected trilogy ship to stores. Majesco is also currently sponsoring a $1 million Xbox Live scavenger hunt to also attract new fans to this new series. Famed Sci-Fi author Orson Scott Card even contributed to the game's dialogue. Add the promises of original superhuman powers, vehicles and other elements that are held together by the story arc (a rare approach in the gaming world), and you've got one heck of a hyped promise to deliver.

In Rising we find that humans were once thought of as myth by many alien races. Humans were believed to be the salvation for the universe in a future time of struggle. Certain alien explorers finally find the humans to warn them of "Seekers," an alien race bent on extermination of the entire human race. Rising follows the story of Gideon Wyeth, a space jockey who lives in the shadow of his wildly popular hot-shot brother. Before getting too acquainted with the brothers Wyeth, The Seekers arrive at the last human outpost and all hell breaks loose. 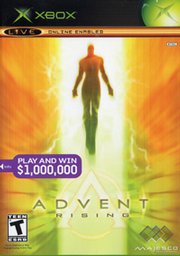 If there is one thing I can say about the entire effort, it's that creator Donald Mustard's heart does shine through. It's obvious that he wanted Advent Rising to be emotional and wide in scope. Unfortunately he didn't have the supporting elements for the vision to be realized.

The first half of the game focuses purely on weapon wielding and learning the "flick-targeting" system. Whenever there is an enemy in the area, you'll merely have to tap the right analog stick in the direction of the enemy you'd like to lock on to, then dispatch him using melees or weapons. You can dual-wield any weapon at any time. When you hover over a new weapon, pressing X or Y assigns the gun to your left or right trigger. Pressing the white button will also toss grenades if you have them. The basic shooting mechanics feel pretty good and would've been awesome without the faulty flick-targeting system. The basic problem is that in normal mobility, the right analog stick is used to look and turn left and right. When enemies appear, evasion becomes almost impossible as you will merely automatically target anyone in the direction of the way you look. If that's not your intention, you'll feel as if your controller is jammed, immediately losing the sensation that the controller is merely an extension of your mind. To further complicate the errant system, Gideon will do a complete 180 many times, locking on enemies you didn't even know were there, stilting your plans to advance properly. Furthermore, pressing X while moving with the left analog stick will perform an evasive dive. Unfortunately this means you can never pick up a different weapon while you run. When the screen prompts you to press X to pick up a new weapon, you have to completely stop what you're doing so you won't dive right past it.

Still, the weapons are mostly compelling. The projectiles all feel like they pack a nice amount of punch and each weapon is not only upgradeable with continued use, but has a secondary function to vary the gunplay. Crouching will increase your accuracy and dispatching your enemies with the smaller targets and steadier hand feels pretty good when flick-targeting works as intended.

In the second half of Rising, Gideon finally hones his secret inner powers that allow him supernatural abilities like levitation, shields and energy projectiles. The targeting still remains unpredictable, but the lift power you gain immediately makes the rest of the game disappointingly simple, especially when you achieve the multiple target upgrade. Simply lift and throw, lift and throw. When you are outdoors on a ledge or bridge, it only takes one throw to send them careening off into instant death. Many of these powers would be fun to upgrade, but Rising doesn't give the player any reason to do so.

The space and ground vehicle elements of the game work for the most part. Riding over bumpy terrain feels good, if not as polished as, say, the Halo 2 vehicle landscape. Regardless, what's there is pretty fun and works better than 90% of action games that try to implement a vehicle component.

Rising boasts seamless transitions from cutscene to outdoors to indoors with hardly any noticeable loading. This definitely augments the player's immersion in the Rising universe. Unfortunately, the art direction and set design are inconsistent and leave much to be desired. At first glance, it appears that there is a minimalist approach to the graphic presentation to give the title an artsy feel. This, juxtaposed with more detailed yet mostly convoluted design of alien characters, makes most of Rising's universe an eyesore. Upon closer inspection, there is an immense lack of texture work and random color choices that do not fit with surrounding schemes. It's almost like a cartoon. And if I was trying to capture that human emotional element in a new exciting way, this isn't the aesthetic vehicle I'd choose to do so. This takes any player right out of the universe someone worked so hard to envelop us in.

It's odd to me that popular science fiction writer Orson Scott Card (Ender's Game) is so highly credited as a contributor to the story. Card admitted he added almost nothing to the story that was pre-written before he got on board. What he did was refine some dialogue along the way. Too bad you can't tell. Much of the in-game dialogue is overpowered by the music. This is merely the beginning of one of the worst audio mixing jobs in recent memory. Many times the music will cut out, become too quiet or too loud on a whim or pop. Sometimes, sound effects just don't happen. The voice acting really adds to that cartoon-ish feel. It's not bad at all, but is more suited to a cartoon world.

Also, the music wasn't tailored for situations. There is no dynamic shift when action starts or stops. This also takes the player out of the excitement. That being said, the music itself is masterful. The originally composed score is fresh, gripping and was recorded with a 70-piece Hollywood orchestra and it sure feels like it. The title screen theme alone demands a gut-wrenching reverence, making the player think he's in for something truly special.

And last but definitely not least, the game has more bugs than most PC games. I've never had an Xbox game freeze or crash on me. Advent Rising crashed four times. Not only that, but scripted events won't trigger sometimes for no apparent reason. This means you'll have to restart at the closest checkpoint and hope for the best the next time. Also, the framerate is awful. The first few levels are definitely the worst, reducing some areas to a slide show. But the rest of the game works hard to even maintain a 25 fps speed, when something of this hype and grandeur should be locked in at 30 at all times. And why? Why is the frame rate so awful? The geometry isn't complex, the AI isn't that complicated and the textures are very low-res. The technical difficulties Advent has are just plain perplexing.

Overall, Advent Rising fails to be compelling on almost all levels. It's an A game stuck in a D- body. It's the heart pounding sensation of a NASCAR field while racing a Yugo. It's the anticipation of awesome promises and the heartbreak of reality.

Wow. This game actually had me interested until the reviews started rolling in. You could say I've turned a new cheek...or whatever.