On the night of June 10, 1882, a mob of angry white men forced their way into the Douglas County Jail, dragged three black men out of their cells and marched them down to the Kansas River bridge.

In a matter of minutes all three were dead, swinging from the ropes below the bridge.

The lynching took place in Lawrence only 20 years after Quantrill's pro-slavery raiders had sacked the city during the Civil War, and 123 years before the U.S. Senate issued an apology for failing to pass lynching laws.

The incident also represents a dark piece of Lawrence history that few people today know about and which has received little publicity since. Two twin sisters, Cindy Schott and Kathy Schott Gates, found that out while researching and writing their book about the lynching, "Boys, Let Me Down Easy."

"At first, I was surprised," Kathy Schott Gates said. "When I thought about it more, however, I was not surprised. A liberal town like Lawrence, founded as a stronghold against slavery, does not like something like this in their past." 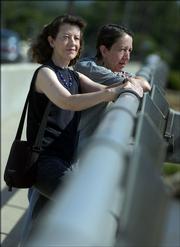 Kathy Schott Gates, left, and her twin sister, Cindy Schott, have written a book about an 1880's lynching in Lawrence that occurred on the Kansas River bridge, where the Massachusetts Street Bridge stands today.

The sisters, who grew up in Lawrence and graduated from Lawrence High School in 1969, began working on the book in 1982 after they heard about the lynching from their uncle, George Kaull. Cindy Schott, who now lives in Belton, Mo., had planned to write a book about the colorful characters and events that made up life along the Kaw, or Kansas River. She considered her uncle, a longtime river fisherman, one of those characters.

Kaull went on to tell his niece about how Pete Vinegar, a black man, was one of the three lynched in 1882. In her spare time during the next several years, Cindy Schott learned Pete Vinegar's story and what happened the night of the lynching. She had to pore over microfilms of old Lawrence newspapers as well as papers in Topeka and Kansas City. She also studied old Douglas County District Court records.

"There was nothing new on this at all," she said of the available resources.

The incident that led up to the lynching involved prostitution, robbery and murder. Pete Vinegar was not involved in any of that, but he was in the wrong place at the wrong time.

Vinegar and his family had a bad reputation around Lawrence. They were dirt poor. His wife, Eliza, died at a young age, leaving her husband with seven children. The children often walked about town begging businesses and individuals for money, food and clothes. Sometimes they resorted to stealing.

"The mob dispersed and left the three men dangling from their long ropes at the now sullied bridge.

"In the morning the bodies were cut down and arranged in the jail yard. Hundreds of people passed by to catch a glimpse of the men felled by the great mob."

Vinegar's daughter, 14-year-old Margaret "Sis" Vinegar, was a prostitute. One of her clients was David Bausman, a rich white farmer from the southern Douglas County area of Globe.

On the night of June 1, 1882, Sis Vinegar met Bausman to do some business under the Kaw River bridge. Waiting in the darkness were two black men, Isaac "Ike" King and George Robertson, who had conspired with Sis Vinegar to rob Bausman. Armed with a metal bar, hammer and stick, they attacked Bausman and beat him to death. Sis Vinegar would maintain that she had pleaded for the men not to kill Bausman.

After the incident, King and Robertson went with Sis to the Vinegar house.

Bausman's body was pulled out of the river on June 5, 1882. An investigation by Sheriff Henry B. Asher led to the Vinegars, King and Robertson. It turned out that Robertson had bragged about what was going to happen with Bausman to four youths ranging in age from 12 to 17. Those youths also were hidden in the darkness the night of the murder and saw it take place.

King and Robertson were apprehended after a massive county manhunt and taken to jail. Also taken to jail were Sis Vinegar and Pete Vinegar. They remained in jail following a coroner's inquest and a preliminary court hearing, even though there was nothing to indicate Pete Vinegar had been involved with the murder.

"I think the town was just fed up with Pete Vinegar and his family," Cindy Schott said. "They thought it was an opportunity to get rid of him, too."

Several hours before the lynching a crowd began to gather in front of the jail. By the time they broke into the jail, they numbered from 50 to 200 people, depending on which account you read, Cindy Schott said. Some wore scarves around their faces; others had covered their faces with wood ash. The sheriff did little to try to stop the lynching.

The last to be hanged was King, saying "Boys, let me down easy." They did, and he died slowly, strangling to death.

The sisters finished their 80-page book and self-published it earlier this year through Allen Press, where Kathy Schott Gates works. It can be purchased at Borders, 700 N.H.; The Raven Bookstore, 8 E. Seventh St.; and Watkins Community Museum of History, 1047 Mass.

In addition to the details about the lynching, the book also contains reprints of editorials about the incident that appeared in area newspapers, including abolitionist John Speer's Lawrence Tribune, and a list of key people in Lawrence who weighed in on the lynching on one side or the other.

Cindy Schott, whose hobby is genealogy, conducted the research for the book, and her sister did the writing.

"We hope that people will just be more informed about the history of Lawrence," Kathy Schott Gates said. "To me, it is a very important history that helped shape Lawrence into the lovely, vibrant town it is today."

No one was prosecuted for the lynching. Pete Vinegar was buried in a "paupers field" area at Oak Hill Cemetery, Cindy Schott said. Sis Vinegar was spared by the lynchers, but died of tuberculosis after spending a few years in prison.

"I feel satisfied that Pete Vinegar's story is finally out," Cindy Schott said. "He was a victim of circumstances."