Xbox owners finally get the best GTA yet!

San Andreas first appeared last October on the PS2 to the much expected fanfare that surrounds the Grand Theft Auto series. Like Vice City for Xbox, San Andreas appears almost eight months later on the MS machine and for PC. Aside from minor graphical differences and slightly better load times, it's virtually the same experience.

No one would ever think that Vice City would seem small. It does now. San Andreas has a whole three cities to eventually express your freedom in with at least 20 hours of gameplay strictly for the underlying story. Even the in-between roads pack some interesting rural scenarios (driving a combine comes to mind). With the Xbox streaming data in the background, the transitions are much smoother. So much focus was put on making San Andreas the biggest, deepest and most sprawling GTA yet, that many of the technical issues of the past rear their ugly head again, hampering what could have been a gaming masterpiece. Which makes me wonder:at what point does the sheer fact of limitless freedom stop making up for technical inferiority?

If you've lived in a hole, Grand Theft Auto's bread and butter is the ability to do anything at any point with a huge, seamless world. Any car you see you can jack. More recently, any land and air vehicle you can also usually commandeer. The sense of freedom works hand-in-hand with the mission-based gameplay. The beauty is in the freedom and the journey to get somewhere. 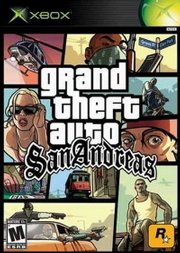 The story is intricately woven through the plethora of mission objectives. Five years ago, Carl Johnson (CJ) escaped from the gang and drug infested life in Los Santos, San Andreas. Now, in the early 90s. Carl's mother has been murdered and he returns to his old neighborhood. Upon arrival, two corrupt cops frame him for homicide. CJ's main story takes him through the huge state of San Andreas, taking control of the streets through whatever means possible and rebuilding a family.

In traditional GTA fashion, the game is chalk full of violence, innuendo and drug use. But unlike the previous outings, Rockstar does an impressive job building the character and not taking the subject matter too lightly. It is the first GTA to immerse you in its world emotionally.

GTA:SA's main downfall is the combination of brain-dead combat, wonky combat control and the lack of non-playable character variety. Seeing gang-bangers flood toward you couldn't be more uninteresting. Most of them behave in a similar manner and trying to lock on is a necessity, since the touchy combat controls constantly interfere with your ability to aim. I expected the Xbox iteration to be much more capable, but it doesn't feel as polished as I had hoped.

Still, GTA: SA does deliver the goods beyond the technical problems. As said before there are many, many, many things to do in regular GTA tradition. I argue that many of the side games are even more addicting:like playing pool or shooting hoops to gain street credit. I am a sucker for pool games and I must admit I spent a lot of time playing it this second time around on the Xbox version. Really. SA also attaches you to the character and the story much better than the previous outing. This is possibly because the subject matter is much more real than a fantasized mafia-drama from the previous GTA.

The graphics are incredibly wide in scope, and the PS2 geometry pop-up problem is much less apparent in the Xbox version. There are still the same bland character models and blurry textures. The main characters obviously had more effort put into their models, but everything else shows only a minor step up from Vice City and obviously behind current generation graphics. Still, the ability to load so much without the constant interruption of loading screens is to be commended. For some very odd reason, the progressive scan output looks very bizarre. It looks like each character has an extra line drawn around them. If you want an experience that doesn't hurt your eyes, turn the 480p mode of your box off to play.

Grand Theft Auto: San Andreas is definitely the best in the franchise. Rockstar poured absolutely everything they could dream of to do in this effort with overall success. It's a nice evolution from Vice City, and GTA fans will spend countless weeks exploring the state. Like the PS2 version, with more polish and better combat, which is central to any game, it could've been an inarguable masterpiece.