It is easy to forget that the unassuming bungalow at 1927 Learnard Ave. helped put Lawrence on the world map.

Lawrence city commissioners tonight may make it a little easier to remember. Commissioners will consider approving a recommendation by the city's Historic Resources Commission to place the former home of renowned but controversial author William S. Burroughs on the Lawrence Register of Historic Places.

James Grauerholz - longtime friend and current executor of Burroughs' estate - said the move was appropriate, even though he acknowledged that the writer was far from being universally loved. Burroughs accidentally shot and killed his wife during a "William Tell" game in 1951 in Mexico City and was a frequent drug user.

"The fact of the matter is that more people know Lawrence because of William Burroughs than there are people who live in Lawrence," Grauerholz said. "William Burroughs is one of the things that puts Lawrence on the map, that is for sure."

Grauerholz said that even eight years after his death, the home still attracts two to three sightseers per month who stand along the curb just to say that they've been to the home of a man who became an icon in the counterculture movement. Grauerholz said the historical designation could provide a boost to efforts to do more to recognize Burroughs' connection to Lawrence. Burroughs lived in the city from 1981 until his death in 1997. 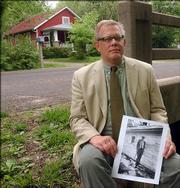 James Grauerholz, a longtime companion and executor of famed author William S. Burroughs holds a photo of the late Burrough's in front of Burrough's home at 1927 Learnard.

"This is really the first step in a longer-range plan of setting up a nonprofit to restore and maintain the house," Grauerholz said. "It is not a roadside attraction, and it is not the type of thing that gets a billboard on I-70, but pilgrims do frequently come to just see the house."

Grauerholz said he would like to turn the house, which currently is rented to a young married couple, into living quarters for a writer-in-residence program that would honor Burroughs. He said that program could complement a small museum and gift shop that he envisions somewhere in the downtown area. Grauerholz said to accomplish all of that, the yet-to-be created nonprofit group likely would have to raise about $200,000. He said he hoped to have the effort completed by 2007 to mark the 10-year anniversary of Burroughs' death.

This won't be the first time that Burroughs supporters have sought to recognize the author, who wrote "Naked Lunch" and was considered a leading member of the Beat Generation. Last year, Burroughs fans successfully received a federal designation to rename a creek near the home Burroughs Creek.

The effort sparked controversy, most notably from Douglas County Commissioner Jere McElhaney. On Monday, McElhaney said a historic designation for the home also rubbed him the wrong way.

"I think it just sends a very wrong message to say a person like that is of historical significance in Lawrence," McElhaney said. "He was a wife-killer and a drug addict. We need to honor those individuals and groups that really make our community proud. Personally, I don't think he is very important at all."

Grauerholz said people should not take the designation as an endorsement of Burroughs' lifestyle.

"We're not trying to force him down the throats of anybody who doesn't respond to him or hold him up as a way to live your life," Grauerholz said. "It is just an acknowledgment that despite all his failings, he was a great artist."

That point, Grauerholz said, shouldn't be in dispute. He said that although Burroughs' work didn't appeal to everybody, he is generally considered a "giant" in the literary world for his point of view on the human condition.

"He had a dark sense of humor, and he generally was not quick to believe in the essential goodness of human nature," Grauerholz said. "Plus, he just had an amazing gift for language and an amazing ear for bits of dialogue."

The historical designation will affect neighbors in the area. If approved, the designation would require property owners within 250 feet of the Burroughs property to receive approval from the city's Historic Resources Commission before undertaking any major exterior project on their homes.

The reaction from neighbors about the designation was mixed. James Beebe, 1944 Learnard Ave., said he didn't plan to oppose the request but said the extra regulatory requirement wasn't welcome.

"I sure wouldn't want to go to all that trouble," Beebe said. "Plus, I know what the house looks like. Maybe it is historical, but it really doesn't look like it."

But Charlene Hodge, 1937 Learnard Ave., said she had talked to several neighbors who were supportive of the efforts to recognize the man who she remembered as a "nice neighbor but pretty private."

"We kind of think it is a neat idea," Hodge said.

Commissioners will discuss the request at their meeting, which begins at 6:35 p.m. tonight at City Hall, Sixth and Massachusetts streets.