'Madagascar' is fun for everyone, especially kids

By By Monty Phan - Newsday

First thing's first: Marty the zebra in the Madagascar video game may sound like Chris Rock, but it's not. Next: The "Everyone 10+" rating may say this game is for everyone 10 or older, but it's not.

The appropriate age range for Madagascar is anyone who doesn't care that the guy doing his darnedest to sound like Chris Rock isn't really Chris Rock. Nor is the guy who sounds like Ben Stiller really Ben Stiller. Or David Schwimmer. Or Jada Pinkett Smith.

Do their replacements do a good job sounding like the people they're imitating? Yes. But not only would it have cost an insane amount of money to get the real actors, it wouldn't be worth it because the game's audience wouldn't care. The sound-alikes are a perfect example of what Madagascar is: a serviceable movie-based game that kids should like but adults will find as not quite up to par.

Thankfully, the Madagascar game isn't one long commercial for the film, as movie-based games usually are. It roughly follows the plot of the movie: Marty and his friends - Alex the lion, Melman the giraffe, Gloria the hippo and four wily penguins - escape from the Central Park Zoo and end up in the African wilderness. Players are able to assume the roles of each animal and his or her unique abilities. 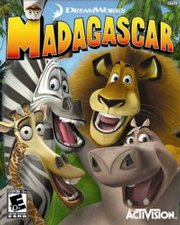 Although much of the game takes little skill, the levels are varied in their approach. For example, in an early level involving the penguins, you're required to use a crane to dump your enemies overboard, fend off attackers using a tranquilizer gun in a shooting gallery-like setting and sneak past surly sailors while hiding in a box. Furthermore, the game makes excellent use of each character's special skills, such as the penguins' slide attack and the giraffe's helicopter spin, which allows him to glide.

Unfortunately, the game can be incredibly easy, especially in the early "get acquainted" stages. One "stealth" sequence, for instance, involves sneaking past zoo security guards who amazingly can see only what's directly in front of them in their flashlight range. Another time, while escaping from the zoo, you're told to kick the poles to make the guards leave their posts without even being given a chance to figure it out yourself.

Bottom line: Kids should get the most out of Madagascar, which is above-average for a movie-based game but too easy for adults. It may be best to rent this, if only because the main adventure probably can be finished in a weekend.

Madagascar is rated for ages 10 and older and can be played on multiple game systems.