Better than most movie games. But that's not saying much.

It's no secret that movie-to-game translations have been notoriously weak. With few exceptions (Goldeneye, Chronicles of Riddick), this corner of the gaming world has generally been a wasteland of mediocrity. Some movies seem like excellent source material for an action videogame, yet the final product manages to disappoint.

Batman Begins is one of those films that seems like it could be made into an excellent game. It has a great protagonist, extremely atmospheric environment, and a slew of cool gadgets and tools that seem custom-fit for a great gaming experience. On the technical end of things, EA did things fairly well for the most part. Gotham looks beautiful, especially in some of the levels where you can see the skyline illuminated by moonlight. The feel of the film has been replicated fairly successfully, helped in no small part by the excellent voice-over work of the films' stars. Actual film clips are used in between levels, and these can be unlocked as you progress through the game. Graphically, the game has few flaws. Faces look especially detailed, and enemies show an appropriate level of fear when you swoop down on them from above. The sound effects are similarly polished and appropriate, and the 'swoosh' of your cape opening sounds like it came directly from the film. Unfortunately, the frequent cutscenes can't be skipped, and this can get to be very frustrating on levels where you're dying often. 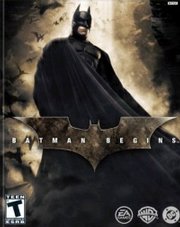 Surprisingly, Batman Begins plays very much like a watered-down version of the Splinter Cell series. Within a few minutes of playing the game, you're sure to get a sense of dejÃ vu when you find yourself climbing pipes, picking locks, and sneaking up on enemies in a burning building. It's eerily similar to the first level of the original Splinter Cell. The similarities don't end there. Batman has an optic cable which he can use to peer under doors, and he'll frequently need to interrogate henchmen to get access codes and information. At times, it seriously feels like Splinter Cell with a cape. There's also some Prince of Persia influence, as platforming segments feature you walking narrow planks and jumping from rope to rope.

The game features an initially intriguing "reputation" system which ends up being almost completely worthless. Your reputation meter will get higher as you use the environment to scare enemies, thus increasing the overall level of fear in the area. The problem with this is that using the environment is not really an option, it's absolutely necessary throughout the entire game. For some reason, bullets will kill Batman almost instantly, even though the movie explained that his suit is made out of bullet-resistant Kevlar. Granted, I'm not expecting total accuracy in terms of the movie, but getting killed instantly by gunfire really takes away from the fun of this game.

Because of the lethality of guns, you are forced to do something in the environment to scare the enemies into dropping them. Unfortunately, the way you go about this is extremely linear. I've never been a huge fan of the Splinter Cell series, but I always admired the sheer amount of ways you can get through any area. You can use brute force, stealth, distraction, hostages, the environment, etc. etc. etc. In Batman Begins, you have one option, and the game holds your hand far too much when it comes to showing you what to do. Let's say you have to throw a Batarang at a support cable, making a heavy object fall onto the enemies. Instead of making you think about it and analyze the situation, the camera will actually lock onto the support cable and show the Batarang icon in the top right of the screen. From there, it's just a matter of hitting Z to throw it, then swoop down onto the frightened enemies and press B and Y a lot to kill them. Any attempt to get past a room like this without using the environment leads to instant and certain death. There are some moments of satisfaction in the game, such as when you drop down from a pipe to stealthily destroy an unsuspecting enemy, but it's all been done before (again, Splinter Cell).

I'm very disappointed with the use of gadgets in the game. For some reason, you can't use them at any time. Batman can't throw Batarangs at enemies, he can only throw them at specially designated environmental objects. If there's a room with a bunch of enemies, you can't just throw a flash-bang right before you swoop in to destroy them. You have to use the environment to scare them, then get close to them while they're afraid and wait for the icon to pop up indicating that you can use it. Even the simple act of navigating the levels can be annoying at times, as the camera isn't very responsive and has a tendency to lock onto things you don't want it to. It's little annoyances like this that keep Batman Begins from being a truly fun gaming experience.

There are two Burnout-inspired Batmobile levels that are a welcome addition to the game. They feature you racing through Gotham performing takedowns on random thug vehicles. For some reason, you can only use the Batmobile's weapons on boss vehicles. I can't for the life of me figure out why the game only lets you use weapons and gadgets at certain times, as it really detracts from the overall experience. While fun, these levels aren't nearly as good as the racing from Burnout or the weapons-based vehicular levels of 007 Everything or Nothing.

When it comes down to it, Batman Begins is a mediocre game that has been patched together using elements from superior games. If you're looking for great stealth gameplay, get Splinter Cell. If you need a Batman fix, just do yourself a favor and see the movie again. The game is filled with far too many annoying aspects and features some extremely linear gameplay. It manages to be better than most licensed games, but ultimately falls short.