No magic in 'Bewitched' remake

"Bewitched" proves a story's true magic lies in its simplicity.

In this convoluted update of the breezy 1960s TV series, the filmmakers do everything in their power to take away the pure premise of the show: mortal guy marries a witch.

It takes more than a sentence to summarize this unfocused mishmash, which comes across like a mix of a WB sitcom and Charlie Kaufman's "Adaptation."

Will Ferrell plays a movie star named Jack Wyatt whose fading box office has led him to spearhead a TV remake of "Bewitched," with himself as husband Darrin. Jack is an egocentric Hollywood type who blames the wardrobe department for the failure of his last blockbuster, and who asks his assistant to "make 20 cappuccinos and bring me the best one."

Not wanting to be upstaged by a co-star, Jack insists on casting a complete unknown in the role of Samantha.

While shopping, he meets and becomes enchanted with Isabel (Nicole Kidman) and begs her to come audition for the show. The gag is that she actually is a witch, and has recently come to a crossroads where she wants to settle down with a man and give up her powers.

Will Ferrell plays a vain movie star and Nicole Kidman is a witch who falls in love with him in "Bewitched."

She agrees to do the series in the belief that Jack is really interested in her. When Isabel inevitably finds out otherwise, her abilities are put to the test as she experiments with ways of changing Jack into the man she hoped he could be.

If Ferrell and Kidman seem like an odd pair for a romantic comedy, well, they are. The luminescent Kidman looks the part, but the worldly actress has a hard time portraying a naive outsider. Whereas Ferrell has yet to find a big-screen role in which he's not winking at the camera. That underlying smirk makes the romance with Kidman appear disingenuous.

There's no denying the towering star provides the film's only energy. Yet, any comedian would flounder in his shoes, because the character itself is so poorly conceived. 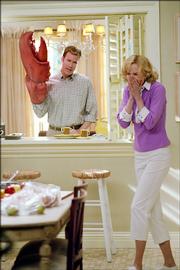 Will Ferrell and Nicole Kidman star in the big-screen remake of "Bewitched."

The role of Jack/Darrin doesn't require a showy, abrasive funnyman; it needs a nervous everyman.

Jack doesn't seem like he'd be bothered by the revelation his girlfriend is a witch. Rather, he would immediately embrace the concept as a means of gaining more fame and money. But what if the movie star were a camera-shy type who lacks self-confidence? Picture Ben Stiller or Paul Giamatti.

"Bewitched" is not without its share of amusing performances. Michael Caine portrays Isabel's philandering father, who pops up in the most unlikely manners to dispense advice. The best of these bits takes place at a supermarket, with Caine's likeness superimposed on different products as she passes them, culminating with him as the jolly green giant on a vegetable can.

That scene also emphasizes how generally subtle and clever the special effects are compared to everything else on the screen.

Yes, it's not the effects crew - or the wardrobe department for that matter - that is to blame for the failure of "Bewitched." The honor goes to director/co-writer Nora Ephron, the auteur responsible for other lightweight losers such as "Lucky Numbers" and "You've Got Mail."

"Bewitched" proves a story's true magic lies in its simplicity. In this update of the 1960s TV series, writer/director Nora Ephron does everything in her power to take away the pure premise of the show: mortal guy marries a witch. She instead concocts a dull, convoluted plot that plays like a WB sitcom mixed with "Adaptation."

Ephron is simply out of her league when it comes to directing a feature film.

She can't choose the right actors.

She can't write a plot. Ephron (and fellow screenwriters Delia Ephron and Adam McKay) devise a finale that involves two people sitting down and talking. Wow, there's a showstopper.

She has no idea how to employ music. The picture's irritating score sounds like one of the those generic CD samplers with titles like "City Groove" that radio stations use as bump music.

Perhaps the best example of her woeful skill involves a montage that Isabel watches at home on TV. Here, the witch flips between snippets of Jack's previous films that are playing on cable. There's a period piece set in Nepal, a boxing flick, a jungle war epic, etc.

But none of them looks anything like a MOVIE. They offer the sensation that Ephron just stuck Ferrell in front of a few fake studio backdrops and said, "Action!"

If she can't even make 10 seconds of a fake movie look real, what hope does she have crafting a 1-hour-and-45-minute feature?

dont waste ur hard earned money on this one folks