The St. John the Evangelist Catholic Church parking lot was transformed Friday into a street party from south of the border.

Inez Silva, 9, gets help with her costume from mother Caro Silva. During the 24th annual St. John's Fiesta Mexicana, the dancers used one of the church's classrooms as a makeshift dressing room. Their performance Friday night at the fiesta required three costume changes, which Silva said the girls had mastered at only three minutes apiece.

Hundreds of people packed around folding tables, eating tamales and tacos and listening to Latino music during the 24th annual Fiesta Mexicana.

"It's gone beyond St. John's, and it's a Lawrence festival now," Lemus said. "I don't know if we could handle it getting much bigger than it is now."

The food line stretched back from a kiosk on the playground all the way to the sidewalk on Kentucky Street. Lemus said they had ordered enough food for 3,000 tacos, 1,500 tostadas and 3,000 tamales a crowd favorite.

Ellen Kimmel, a 15-year resident of Lawrence, said she returns to the fiesta each year for the cornhusk-wrapped specialty.

"I come for the tamales," Kimmel said. "You can't make them at home they're too complicated. But everything about them here is great." 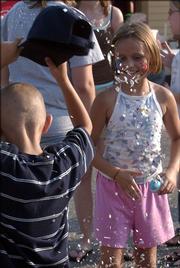 Clay Lister, 7, shakes confetti from his hat as older sister Erayna Lister, 9, smiles at her handiwork. Clay repaid her for the confetti-filled egg she broke over his head by throwing another one at her. The two children were at the St. John's Fiesta Mexicana Friday night with the rest of their family, who are parish members and attend the fiesta almost every year.

The event also featured an entertainment troupe from the Kansas City area with dancers and musicians. Five girls in traditional black Mexican dresses stepped in sync to a variety of songs with Spanish lyrics. The crowd applauded loudly as they swished their skirts back and forth.

As an accordion and bass-heavy song blared over the speakers Friday, Adam Cordova danced with his 9-month-old son Augustus in his arms. Cordova, who attended St. John's school as a child along with his brothers, said the festival was a great time to remember family and tradition.

"And the tamales are fantastic," he added.

The event also runs from 6 to 11 tonight at the church, 1229 Vt. The food offerings will be expanded to include enchiladas and burritos as well, Lemus said.