For five hours they've sat in the smoker, soaking in the essence of the apple wood burning in the fire box. Every hour or so a spray bottle spritzed them with apple juice to ensure that they remained moist in the 225-degree heat. And after resting outside the smoker for nearly an hour - so that the meat could reabsorb some of the juice it had expressed - the ribs are tender, melt-in-your-mouth ready: ready to defend their title as the best in state, and to grant their creators, Bob Schaffer of Lawrence and Bill Simon of rural Eudora, another year of coveted bragging rights.

Sure, winners at the Great Lenexa Barbeque Battle, Kansas' official state barbecue championship, get some money. The overall winner gets $2,000, and the winners from each of the seven individual categories - ribs, pork, chicken, brisket, sausage, whole animal and miscellaneous - get a few hundred dollars apiece. But with 184 teams crammed into Sar-Ko-Par Trails Park for the annual event, which was founded in 1982, the ego boost from a win can be priceless.

"Money spends," said Bill Nicks, Lenexa's parks and recreation director. "But the guy who wins the whole thing - that guy might cry. What they really want is to be able to say that they're champion."

Last year at the Barbeque, Schaffer and Simon, who cook under the team name Sweet Old Buzzards, beat out 180 other entrants in the rib category, perhaps the cookoff's most competitive individual event. 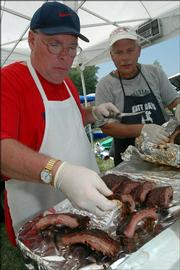 And given their experience, it wasn't too much of a surprise. Schaffer and Simon have barbecued competitively for nearly 20 years and travel to events throughout Kansas to hone their skills. They won the brisket category at Lenexa in 1994, and consistently place in several categories at smaller competitions. They finished a respectable 14th place overall at Lenexa last year.

But ribs - ribs are the specialty of the Sweet Old Buzzards.

At 12:30 p.m. Schaffer sets three slabs on a table counter across from his smoker. The Buzzards have a good site in the park, with room for Schaffer's smoker and a preparation table under the portable tent. Simon has just turned in their chicken entry, and rib entries have to be to the judges' table by 1 p.m.

John Humphrey, a Lawrence resident who heads the Smoke N Things team stationed in the neighboring tent, wanders over for a look.

"Think of the poor little piggy who had to die for those," Humphrey says, goading his friendly competition.

"Yeah, but he had a big old smile on his face when he went because he knew he would taste so good," Schaffer calls back with a grin, and quickly returns to the task at hand.

Simon holds a slab at an angle while Schaffer slices, cutting against every other bone so that each rib has the maximum amount of meat clinging to it for the presentation.

After 10 minutes of surgery on the three slabs, they've come up with 12 ribs that look worthy for the judges. The two then sort through the ribs, culling the least aesthetically pleasing portions like trial lawyers striking potential jurors.

"I don't like the color on this one," Schaffer says.

Soon there are six picture-perfect ribs lying on the cutting board - each the same size, shape and color.

It's time to plate.

Simon, the presentation expert, brings out the judge-sanctioned Styrofoam container and places it on the table. Earlier in the day, he'd laid down an attractive bed of leaf lettuce and parsley - the only garnish, along with cilantro, allowed by the judges.

Simon moves quickly, placing each rib in the container with precision as Schaffer hovers over his shoulder. When a drop of sauce falls onto a piece of lettuce, Schaffer swoops in with a napkin and ever-so-carefully lifts the offending blemish. As Simon strategically places a few more pieces of parsley, Schaffer takes a paring knife and digs out a fleck of wayward meat that dared to jut from a rib's smooth edge.

"It's not nearly as important as the taste," Simon says, "but I think that if they didn't look good the judges might think we don't care about how they taste either."

With 10 minutes until the rib judging opens, the Sweet Old Buzzards have a chance to sample their fare. They each grab one of the remaining ribs. Schaffer bites in.

Moist and tender, the meat pulls cleanly off the bone with each bite. This is a good sign.

"I was concerned at first that they might be too tender," he says. "You don't want the meat falling off the bone, but you want it too come off cleanly. And that's a fine line."

After a rib or two and a few sips of beer, it's time to get the entry in.

Schaffer takes the rib carton, wraps it gently in a white towel to absorb the shock of his footsteps, and sets off toward the judging area. He takes quick but carefully thought-out paces, darting past the hundreds of people milling about the grounds in search of free samples. Grasping the package tightly with both hands, his arms do not move.

"It's one of my biggest fears," he says. "One fall on the way to the judging table and you're done."

He files into line outside the judging tent and sets the Styrofoam box down on a table. Now the fate of Kansas' reigning rib champions is in the hands of the judges.

On Saturday evening the judges called out the top 10 finishers in the ribs category, and the Sweet Old Buzzards weren't on the list.

"When they were calling out the winners, a lot of the teams that usually do well weren't being called," Schaffer said. "So it didn't surprise me. It just depends on which judges you get, and they seem to like to spread it around a lot, which is good."

Full results won't be available until this afternoon, but Schaffer said he was confident that the ribs would finish well in the greater scheme of things.

"We almost always place in the top 10 percent for ribs, and that could be as low as 18th in this competition," Schaffer said.

Was it their best year? Maybe not, but the Sweet Old Buzzards didn't walk away empty-handed. The judges gave them an honorable mention for the smoked salmon they submitted to the miscellaneous category.

But still, the coveted "Best ribs in Kansas" title belongs to another now. Perhaps it stings a bit, but Schaffer said he didn't cook for the prizes.

"We do this for fun, and when I stop having fun, that's when I'll stop doing it," he said.

But wouldn't it be fun to get re-christened as Kansas' rib kings?

Part one: Bob Schaffer and Bill Simon, the Sweet Old Buzzards, discuss their progress as the Great Lenexa Barbeque Battle moves along.