Could be the best puzzle title in years

At this year's E3, the Nintendo DS lineup surprised many attendees with its strong and promising titles. One particular puzzle game from the makers of PSP hit Lumines caught many eyes. That title has finally arrived and proves to be deeper and more engaging than Lumines, making Meteos easily the DS's flagship puzzle game.

Although screenshots make Meteos look like a standard color block puzzle game, the game plays in a very unique fashion. Colored blocks fall from the top of the screen to form a mess on the bottom. You can use your stylus to move a particular block up and down (but not left or right) in order to line up three or more colors vertically or horizontally. Once you've done so, those matching blocks turn into rockets, transporting every block on top of the rocket platform upward. The goal is to get enough rocket force to propel the blocks off the screen to destroy them. Sometimes, the rocket won't have enough power or the gravity is too forceful that you will have to try to make a second stage for the rocket platform in order to get the blocks off screen. 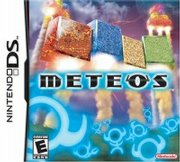 You better learn to look for combo and second stage opportunities quickly, because after starting at a manageable pace, the difficulty ramps up considerably on many of the modes. This requires you to be most precise with your stylus strokes. Meteos was created specifically around the stylus, so there is no other way to play.

There are several modes offered. Some are simple endless and time attack modes. Others will have you battling from planet to planet in different selectable paths in order to reach the final face-off with the Meteos home planet. It's interesting to see a fun-loving plot interweaved throughout the game. Frankly, it sort of works! 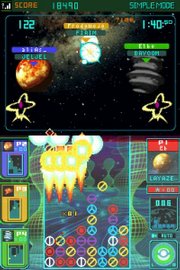 Multiplayer is handled marvelously. Sending Meteos rocketing off the screen sends havoc on its way to your opponents. And even if your friends don't have the game, it can still be played via the wireless download function. There are also other items like bombs that can destroy friends' Meteos. This may sound like it could help them instead of hurt, but when you're trying to build up your block for a huge combo, it can be devastating.

The sound is bright, cheery and puts forth as much charm as the vibrant graphical effects. The entire design of Meteos is extremely pleasing on a basic aesthetic level. Sure, it won't blow you out of the water, but for a puzzle game, there is purpose to the palette.