Dante returns in his best, most challenging showing.

Devil May Cry burst out of the mundane PS2 action scene several years ago, breathing a new and stylish life into the action world. Guns, blades and gothic goodness fused into a badass action romp not seen since the glory days of Castlevania. Devil May Cry 2 totally marred the series with its uninspired design. So does DMC3 resurrect the series?

In every way possible, Devil May Cry 3: Dante's Awakening is just that, an awakening. Its predecessor may have turned some off with its horrible camera and blah gameplay, but make no mistake, DMC3 corrects nearly every transgression of the previous iteration. There are a plethora of guns, blades, guitars and evasive maneuvers to combine to make the action always interesting.

The one thing that sets it apart from the other DMCs is the fact you can choose one of four styles to begin with (there are two more to unlock). Trickster, Guard, Gunslinger and Swordmaster can be chosen to suit your style of play. Like to jump around like a steroid gymnast? Trickster is for you. Like swordplay or have a gun fetish? There is a style for you. What's amazing is, the four styles are singularly deep enough to carry the gameplay entirely on its shoulders. It could be almost like having four different games each time you run through, if you decide to be that dedicated. 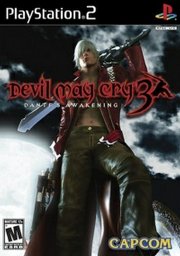 And, man, you will have to be truly dedicated because this game is incredibly hard. I'm talking Ninja Gaiden hard. It's no wonder, because the Japanese "hard" mode is actually this version's normal mode! Thanks, Capcom. Broken controllers will abound, so buy the bargain bin types.

Regardless, the attention to detail and presentation is so fluid that you won't mind replaying certain areas. With the DMC1 yellow orb-type save system reinstituted, you know you will have to.

Now, some reviewers liken linearity with a ball of snot. I'm not that closed-minded. In fact, I love linear games for the specific fact that developers can concentrate more on the production values rather than making sure you can free-roam into arbitrary locales. Grand Theft Auto is the only series that pulls this off with an amount of success. When was the last time you got off your favorite roller coaster and said "Man that was fun, but the coaster only had one path." Yeah, never. DMC3 proves that linearity is no flaw and cherishes every scripted action and path so much that almost every level is memorable. The boss designs really take the game to a new level as well, with their creative attack patterns.

Graphically, the game doesn't push more pixels necessarily, but uses them more efficiently and beautifully. Taking place before the first game, DMC3's gothic design is dripping with more fright, style and sinister coolness. Not only that, but the game hardly hitches from its solid 60 frames per second. Even late in its cycle, the PS2 still shows some pixel-pushing prowess.

What's that I hear? Decent voice acting? It's true. Not only decent acting for an action romp, but excellent Dolby Pro-Logic II encoding ensures that the crisp sound effects and creepy noises will always envelop you. The music is a notch above most other adrenaline-fused anthems and really drives the gameplay.

DMC is one slick, fast, beautiful and challenging ride that packs surprises, bonuses and a one-of-a-kind experience that rekindles the love I had from the series debut. There are so many secrets that will keep you coming back as well as the addicting gameplay; you can't go wrong. Consider the Devil May Cry franchise redeemed.