Book review: "The Age of Sinatra," by David Ohle

What's bad for one may be good for all

By By Katie Greene / katie@lawrence.com

"If David Ohle's writing is any indication, modern fables with sharp political critiques are definitely on the upswing." In the Lawrence author's newest book, "The Age of Sinatra," Ohle (rhymes with cannoli) documents and caricatures political and social observations over recent years. His story explores a dark and bizarre society where unimpeded leaders use mass mind control techniques, surprising objects are edible, law and jurisdiction are arbitrary, hair is smoked, and the smack-down of one (regardless of guilt or innocence) is good for everybody. "The Age of Sinatra" is written in a unique style that mocks much of what we see in politics and society by watching "ordinary" people live in a grim reality.

Fighting the good fight, in the most passive way possible is hero, Moldenke. He unwittingly becomes a major player in an attempt to assassinate the president by just being at the wrong place at the right time. However, the political uprising is rarely directly addressed, as none of the main characters care about it any more than they care about the daily gossip in their edible newspapers. Tragically, even though everything Moldenke does is a direct result of something that happens to him, he is still at the brutal whim of fickle authorities. This forces a sense that both thoughtful action and submissive inaction yield the same results, giving an oppressive despondency to the book. 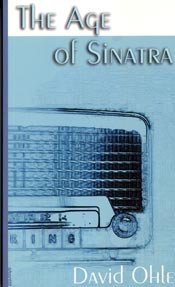 While the plot can be boiled down to an attempted government coup, this really isn't the gist of the book. Because the revolt aspect only becomes obvious after the halfway mark, it seems almost like an afterthought-a storyline that was merely laid on top of the twisted, dystopian world that Ohle needed to channel into print. But while a reader idles in Ohle's reality, waiting for him to get us to where he wants us, there is plenty of information to soak in. This is the point.

The setting is heavy on quasi-real elements, observable today, like stylish self-mutilation and media that can be bought for political marketing. Ohle describes these traits out of proportion and to a grotesque extreme. As an example, there is a widely acclaimed doctor that performs the best elective deformations on people-one character is literally all-thumbs, all the time. While many of the characters have some sort of trendy surgery, the most pervasive aspect of "The Age of Sinatra" is the regular radio announcements performed by President Ratt. It is law that everyone must stop and listen to the public broadcasts of the president as he decrees new outlandish regulations and repeals rules from days before. These radio announcements, it is speculated, are also responsible for the periodic "Forgettings." Not surprisingly, attitudes toward the Forgettings go as the president says, "Come rejoice. Every Forgetting is a renewal, not a loss." And perhaps that's what makes Ohle's hopeless world worth living. To calm a prisoner who was unjustly sentenced to break up sludge in the French Sewer, Moldenke's mother says, "No sense in worrying. A great Forgetting is on the way. All this will be gone." These Forgettings, a reader can hope, are the only reason characters see fit to divulge every disgusting and intimate detail of their personal lives with each other while sitting around smoking hair.

All aspects of this repulsive world are written about in a tone that is dark and organic. Ohle focuses intensely on human flatulence, secretions and decomposition. Vivid descriptions of putridity riddle the pages and because of this, there is a constant, perceivable background that mires the story in filth. Oddly enough, inspite of the muck-or aided by it, perhaps-Ohle manages to be funny. Whenever a character mentions a Forgetting, invariable another character quips about something that slipped his mind. And then there's the rhyming. In an interview with Moldenke's mother (famed inventor of edible money), a reporter's first question is, "Is it true, about the glue?" To which Agnes Moldenke then describes her insatiable appetite for drinking the stuff.

Rhyming is just one way Ohle reveals his fanaticism about playing with not just words, but language as a whole. He explores how language-play, when controlled exactly, can extract a precise sentiment from a reader. For instance, there is a character name Hilter who appears on the cruise ship Titanic. Even with two letters of his name transposed, a reader instantly suspects a fellow with a name like that to display cruel or racists traits. Not so. Ohle does the opposite of what is expected and never treats Hilter's name any differently than those of Moldenke or another character, Ophelia Balls. And just when I was lulled into not taking any name at name-value, the Titanic sinks and forces me to rethink my assumptions.

When I first began to read the book, I put it down about a third of the way through. The style of "The Age of Sinatra" is designed to keep the author in control o the reader. There are no chapter divisions in the book and no wasted words. Ohle leaves holes in his descriptions that forces readers to trust that he will reveal more details later. When I looked at the book again, I knew I needed to start over and just plow through it. This, surprisingly, was a satisfactory way to read "The Age of Sinatra." It gave me a useful familiarity with the unrealistic setting, the characters and style that allowed me to cringe and laugh and gag in all the places where the author might have intended.

The author David Ohle is a Lawrence writer and lecturer in KU's English department. Ohle co-wrote "Cows Are Freaky When They Look at You" and compiled and edited "Cursed from Birth: The Short Unhappy Life of William S. Burroughs Jr." "The Age of Sinatra" is a available at your preferred local bookstore.