Tekken returns with its most complete and exhaustive effort.

The Tekken series is back with its fifth edition. It's had a quiet release that's been overshadowed by GT4, but nonetheless, Namco has done the series justice. The game is great and very deep, with a lot of modes to play.

Simply put, I got hooked for about eight straight hours. The game is deep, plain and simple. The different modes include arcade battle, story, survivor, team battle, and an adventure mode. The new adventure mode is more of a bonus that was included in the game; its production values are pretty low. You are basically running around the same areas and the enemies you fight only have a variation of about seven. The story is pretty lame, too. I honestly had no idea what was going on the first chapter. It's also very different from fighting in the arcade mode. You can't fight the same way, and it takes a bit to get used to the differences, especially the camera. It's not bad, though, and pretty entertaining for about 30 minutes. After that it just gets old. The other modes are pretty self-explanatory. On top of the playable modes there is a character customization that shouldn't be overlooked. You can customize what your character wears and looks. It's a nice addition that helps this game's depth. You'll also be able to watch all the CG movies you unlocked and listen to the various sounds and music of the game. 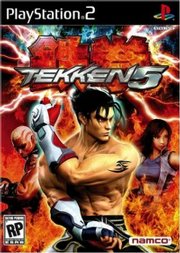 I'll save the gameplay for last and quickly talk about the graphics and audio. They are both pretty top-notch when it comes to fighters. The CGs look great and are very fun to watch. The game is smooth, which is important for fighters. There were no glitches or hiccups with the framerate or animations. The areas you fight in are pretty amazing themselves, too. They're varied from night to day, outside to inside, bright and colorful to dark and mysterious, etc. The sound is outstanding. It's very fulfilling and makes its presence known. Each thud, jab and kick is very distinct. The music is your typical fighter style: a lot of orchestra/techno/rock mixes. The addition of 16:9 and progressive scan support are a big plus and made me extremely happy.

Now to the gameplay, which is where fighters are made. You can add as many cool features and unlockables as you want, but if the fighting isn't fun, the game fails. Luckily, this game doesn't. What I loved about Tekken 5 is that it seemed to me to be a mesh of Soul Calibur and Virtua Fighter. Soul Calibur is primarily an offensive button masher and Virtua Fighter is very technical and deals a lot with defense and counters. This game meshes the offensive and defensive together. Not only is it heavy on offense, there's a lot of defensive technique involved as well. There are a lot of counters to different moves, such as sidestepping attacks. I found that learning how to time and master the sidestepping attacks was probably the best thing I did. It's basically impossible to avoid them, but they are hard to pull off since they take such great timing.

The character balance is indeed good, however there were some characters that are just amazingly cheap. They can attack in almost any position, and makes it pretty easy for beginners to just mash their way to victory. This is expected, though. With this many characters and the attempt to keep each one unique, you are going to get some unbalanced characters. One pretty big complaint I did have with the gameplay is how hard it is to sidestep, which differs from the sidestep attacks I just mentioned. What I'm talking about here is simply sidestepping to dodge and avoid attacks. For some reason they're hard to pull off. You would think that double tapping up or down is pretty simple, but sometimes it's not responsive. Now this could be that I suck, but my friends also had this complaint.

The game is very combo heavy. Once you look at the list of commands, you'll notice that every move in the game is basically a combo instead of an individual move. This means that it'll take a while for you to learn and master one character, which is what I recommend you do. Pick one guy and just get awesome with him. The game becomes really fun when you start to know what you are doing when it comes to combos and moves. I was a bit disappointed that there was no online option. That's something that would have pushed this game over Soul Calibur for me. We all know that fighters are the most fun against other human players, so being able to square off with some other player any time I wanted would have been great. I'm sure online tournaments and such would have been available too. Well, enough wishful thinking.

The game plays great, and considering there isn't another great 3D fighter to come out for a while, Tekken 5 is a great choice if you feel fighter withdrawal. I wouldn't put this game over Soul Calibur, however. Soul Calibur seems to flow moves and combos better than Tekken does. And as deep as Tekken is, SC was a bit more deep with the whole weapons master mode. Still, the game is deep with a ton of replay value. It's great to just pick up and play for a couple minutes and kick some butt, especially with how complete and exhaustive the Tekken roster is.