Many new additions make Round 2 even better

Last year, EA Sports resurrected its boxing regime, foregoing the Knockout Kings IP in favor of Fight Night and introducing the total control system of movement and punches using merely the analog sticks. With the extended Create-a-Champ, new Haymaker and Cutman features, Fight Night 2 secures itself as the most robust and realistic boxing title to date.

In addition to the smooth gameplay and realistic facial distortions and animations like we got spoiled with last year, the new features really add the extra level of immersion in your boxing career. With the new Haymaker, you can put an added dose of power on any punch, hoping to land the highlight one-punch KO. But as a measure of balance, if you miss it, you are open for a brutal counter. If you find yourself dazed by a Haymaker, you can now clench! It was so ridiculous to not have that ability last year.

You no longer have to be passive between rounds. If you choose, you can take control of the cutman, using a plethora of tools and aids to heal cuts and bruises to better prepare your boxer for the next round. Although it sounds complicated, it's actually fairly easy to get used to and is a great addition, especially when you're trying to immerse yourself in the newly expanded career mode. 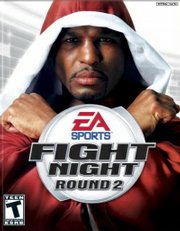 Like Tiger Woods, you can have ultimate control over the facial features of your boxer to make him look as close to you if you desire. In addition, you can merely use the analog sticks to "sculpt" your player. Again, another must when trying to get enveloped in career mode.

With career mode, EA made the amateur circuit make more sense, being able to customize your type of trainers and playing by amateur rules and regs. The career process feels much more focused and realistic and turning pro has never had this level of satisfaction. Even when pro, the game feels slower than last year, obviously to reflect the sport's real life counterpart.

The graphics engine has been totally overhauled and the detail is pretty shocking. Almost all of the 36 real life boxers look amazingly accurate. Instead of sacks of potatoes flailing toward the ground, the boxers have a more accurate sense of weight and are less twitchy. Instead of bruise look #1, bruise look #2 and bruise look #3, the damage effects are mapped specifically to the area that got pummeled, further setting up the cutman sequences. The crowd noise is fantastic, with specific chants to add to the excitement augmented by Dolby surround. Other than that it the crisp, yet standard Fight Night fare from last year.

PS2 and Xbox owners enjoy the lag-free online options that are pretty standard yet fun. Gamecube owners continually get the online shaft but its version makes up for it with the classic Super Punch-Out as an unlockable game. You can even play as Little Mac if youplay your cards right.

Fight Night Round 2 is a great step up from its predecessor. It fixes several things from last year and is the undisputed king of the ring.