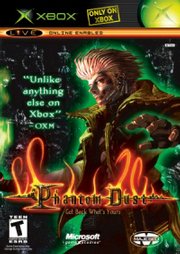 In the world of video games, spring is the season to sleep through a boring list of blah releases. This year, we've had a few surprises, plus the launch of the PSP, so it's been far from the normal spring blahs. Majesco's Phantom Dust appears out of nowhere, and provides a whimsical blend of card-based RPG battle and tantalizing action.

Humans have been hiding underground for some time to escape the dangerous dust on the Earth's surface. You and your fellow humans have no recollection of who you are, but you know that you have been blessed with a mysterious power to harness the dust for power. The 100+ single-player missions have you running around and talking to NPC cronies underground to uncover your history, whilst returning to the surface on a regular basis to do battle.

Phantom Dust gives you an Arsenal Case in which you, well, fill up your arsenal to prepare for each battle. You have 30 slots to fill with different powers. Although there are four classes of powers, you may only choose up to two classes to represent your arsenal with most cases. So, if you become attached to a certain power in a class, you are stuck with that class to pick more powers from. There are appealing powers in each class, and fairly rudimentary ones. The trick is learning to balance your attacks and when to use which power. There are a myriad of short- and long-range offensive powers, enhanced movement powers and defensive powers to pick, so that the combinations seem endless.

Of course, using powers takes energy, so to be most efficient you may want to fill a lot of your slots with Aura Particles, which give you the energy to perform you powers with utmost efficiency. In the battle, you can walk over a power and assign it to one of the four face buttons, then simply press the corresponding button to use the power. When wanting to use a different power that isn't one of the four, simply move to another power on the ground and re-map it to whichever button you desire. The battle system may sound a little convoluted but takes very little time to get used to.

Still, the depth increases exponentially the more you familiarize yourself with the many powers. There are an endless amount of strategies and orders to beat particular enemies.

The environments add a lot of satisfaction to the battles. As you whip lasers, fire and other projectiles at your opponent, buildings and structures will destruct according to the trajectory of your shot. Seeing particles fly really adds to the excitement and sense of accomplishment, even if it's senseless destruction. The many bosses, ranging from humans and droids to giant frikkin' monster things, vary the combat as well. However, the presentation of the entire single-player experience leaves much to be desired. Aside from gathering text for the story, each mission seems disjointed from the whole. The lack of many battle arenas also hurts the overall sensation of story. But, hey, the game's only 20 bucks.

Regardless, the combat is still engaging and gets a major upgrade when you play your cards online. The hitch-free experience proves even more enthralling when you're teaming up with a friend to take on people across the world. You can choose from 1v1, Tag Team and Battle Royale depending on your likes. Each gametype has several variants to keep the multiplayer experience fresh. No Xbox Live? Phantom Dust also supports split-screen and System Link.

Phantom Dust didn't sell well in Japan, but has the makings of a great online experience for us Westerners. For only 20 bucks, it's totally worth your time, no matter if you're an action or RPG fan.