As an 8-year-old child actor, Rick Schroder ran into his idol backstage at the Academy Awards. Schroder had just presented an Oscar for art direction and began chatting with the legendary John Wayne, who was there to bestow best picture honors to "The Deer Hunter."

The elder star spoke about fame, and how critics and awards weren't nearly as influential as what the fans had to say.

"I grew up watching the John Ford and John Wayne westerns," Schroder recalls. "It wasn't until I got older that I realized that depiction of Indian people is very damaging and one-sided. It didn't show the whole story. But I always wanted to make my first movie in Monument Valley (Ariz.), because John Wayne was my hero."

Schroder, now a filmmaker, has done just that with "Black Cloud," an independent feature about a young Navajo man who is given the opportunity to fight his way onto the U.S. Olympic boxing team. 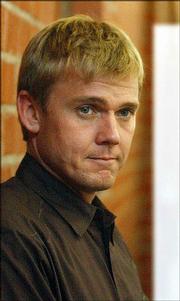 He has also written, directed and produced a piece that is the antithesis of the cowboy and Indian films of Wayne's era.

"The Indian people are so diverse -- there are over 500 tribes. And there are regional and economic differences between these tribes, as well as cultural differences. So it's really tough to say one movie can encompass all of the complexities of that," he says.

Schroder will present "Black Cloud" at 7 p.m. today at Liberty Hall, 642 Mass. The filmmaker will lead a Q&A session after the screening. The event opens the first Haskell Film Festival, a three-day event created to honor American Indian actors and directors.

For Schroder -- who found teen idol status on TV's "Silver Spoons" and revived his acting career recently on "NYPD Blue" -- the chance to craft his debut project hinged on one main element: money.

"Mainstream studios and distributors make movies that appeal to the masses," Schroder says in a phone interview from his home in Arizona. "This movie was not destined for that sort of partnership."

So the 34-year-old performer journeyed around the country showing his screenplay to private investors from nearly 50 Indian tribes. The timing of his recruiting trips came on the heels of a dictate by the National Indian Gaming Assn., which encouraged its members to invest in artistic projects that advanced native culture. Eventually, Schroder convinced backers from a dozen different tribes -- both individuals and tribal governments -- to pitch in about $1 million.

Although the blond-haired, blue-eyed Mormon went into the endeavor with few personal connections to American Indian culture, his project was met with respect and admiration.

"There were a few silly things in the script that, out of ignorance, I didn't know," he says. "Like the Navajos aren't called by the names of the Plains tribes -- such as Running Bear and Swift River. Navajos have names like Peter and Mary. In my original script, I had some of those names that we quickly got rid of. But there were no major changes or notes from my (financial) partners."

Eddie Spears stars as American Indian boxer Black Cloud in a film written and directed by Rick Schroder. The filmmaker will be in Lawrence today to screen "Black Cloud" at Liberty Hall.

"Rick didn't really know very much about Indians at all when he sat down and wrote it, so he didn't KNOW the stereotypes to put in," says Julia Jones, who plays Sammi, the girlfriend of Black Cloud (Eddie Spears).

Jones, who is part Cherokee, found the Golden Globe-winning actor to be a natural at handling the cast. But it was his other talents that most impressed her.

"He's probably the greatest multitasker of all time," she says.

"One time we were driving from one location to the other and listening to songs for the soundtrack. He drove by this older Indian lady who was wearing a traditional outfit with these turquoise Keds on. He saw her and said, 'Oh, she would be so great.' So he just picked her up and put her in the movie."

Schroder stresses the strong cast of the flick helped make his job as first-time director that much easier.

"When I wrote 'Black Cloud,' I had no idea what kind of Indian talent there was to choose from," he says. "I found very talented actors -- more than I thought were out there."

For such a low-budget film, he did manage to gather some familiar faces in supporting roles.

Russell Means, the actor ("The Last of the Mohicans") and former national director of the American Indian Movement, portrays Black Cloud's boxing mentor. A slimmed down Wayne Knight (Newman of "Seinfeld" fame) shows up as a sleazy government bureaucrat.

Most notably, "Black Cloud" represents the first screen appearance of country superstar Tim McGraw, who in addition to his role as a tactful sheriff also contributed several songs to the soundtrack.

"Black Cloud" has been well-received by most viewers, having won awards at all the film festivals in which it has been entered. But Schroder says Indian audiences in particular have taken the picture to heart.

"They have a frame of reference that non-Indians don't have," he says. "They know what it's like to grow up on a reservation."

While Schroder has clearly lived a different life than the people he chose to focus on with his cinematic venture, he can still relate to the headstrong, underdog character of Black Cloud.