By By Paul Mattson - special to lawrence.com

It has been a lifelong dream of mine (well, more like a dream of mine ever since I played Ninja Gaiden for Xbox ... the "lifelong" thing just makes it sound more dramatic) to be able to switch to third person and put a severe whuppin' on my enemies in a first-person shooter. Behold, Unreal Championship 2: My dream come true.

Unreal Championship 2 makes a daring attempt at blending third-person action with first-person shooting goodness in a title designed with the fabulous Unreal Tournament engine exclusively for the Xbox. I'm going to get it out of the way right up front: If you love fast-paced shooters that are ultra violent and are centered primarily around online multiplayer with responsive controls and a huge fun factor, you absolutely want to buy this title.

Now, let me start backing up this claim.

First, let's talk about gameplay. One thing that rubs me the wrong way about console shooters (yes, I'm a PC guy) is the control scheme. They never seem to work quite the way I want them to. They usually feel clunky, and I never feel I have the same quality of aiming control or responsiveness that I get with PC games. This is the ultimate exception to that statement. The controls are intuitive and responsive; the jump moves yield an unprecedented amount of mobility for a console shooter. Players can run, jump, double jump, jump off of walls, jump in-between walls to get to higher places, fly through the air with an awesome melee move, and generally clamber all over the level like it was one gigantic jungle gym. The level of control and interaction with the environment is phenomenal for a console game and feels extremely natural. Furthermore, the ability to transition between first and third person was executed perfectly. 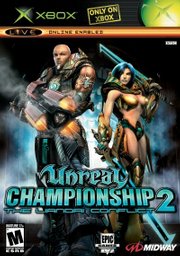 Having said all that, let's get down to business: The weapons. Each player has a melee weapon and a "pistol weapon" that never runs out of ammo. The pistol weapon can be used to stun opponents, granting the opportunity to pull out whatever blunt object he or she favors and deliver a melee finishing move by following an on-screen set of button presses. If executed in time, it's an instant kill. The melee combat is fairly rewarding, and often players may find that they don't really feel like using guns at all in the matches (which I will talk more about later). Why? Well, melee kills are extremely satisfying, that's why! You can literally rip your opponent into little itty-bitty pieces with your sharp pointy stick and then mock their failure and ineptitude with the built-in taunt system. But this isn't just a melee-weapons game. Oh, no. There are guns, too. And sadly, most players seem to forget this simple fact.

Most of the weapons will be familiar to Unreal veterans. However, they have all been changed slightly in some way as to be more console-friendly. The basics have all made a return appearance: shock rifle, flak cannon, minigun (now called the stinger), rocket launcher, grenade launcher, sniper rifle and the bio-rifle are all available for selection, each with two functions and special combo moves (like the shock combo, for example), which adds a much appreciated level of versatility. You can pick one rifle weapon and one explosive weapon when you "load out" at the beginning of each round, and you start the game with both guns and no ammo. That's kind of nice, because you don't really have to worry about weapon control on the maps and you spend more time focusing on the actual skills needed to win a firefight rather than item control. The weapons feel and work fairly well for the most part, though some combos are more effective than others (i.e. rocket launcher and shock rifle rule all your mommas, dawg).

Now, as I mentioned before, many of the players I encountered online seemed to forget that the game had guns at all. The melee system is so shiny and new and rewarding that at first it seems to eclipse the weapons altogether. However, when I pulled out my rocket launcher and started shooting the poor saps running at me with their pointy sticks, I nearly killed all of them instantly. First, because they forgot that there was a block button. Second, because they probably weren't all that good. Third, because they didn't realize that they had guns as well, and could actually use them in tandem with their melee weapons to achieve maximum effectiveness. Once I got into a habit of switching back and forth between guns and melee weapons, the game really kicked into high gear for me.

Let's talk a bit more about the jungle gym world you find yourself in. The game ships with more than 30 maps that are all designed with the shooter/melee game type in mind. There are a few revamped favorites here, but most of the maps are brand new. The basic deathmatch/team deathmatch maps are fairly well thought out, offering players plenty of opportunities to use the mobility of their characters to their advantage. The only real complaint I have regarding the maps is the CTF maps. They seem very linear and don't offer a lot of different routes to get to the flag. A bit disappointing, to be sure, but not enough to make me regret owning the game.

Some additional perks in the game include the variety of characters to choose from and the fact that they each have different adrenaline moves to execute. Raiden (yes, Raiden from Mortal Kombat is an unlockable character in the game), for example, can teleport across the map and create an electric ball of energy to set somewhere in the level like a landmine that stuns his opponents. One of the robot characters, Raptor, can activate a self-destruct sequence and blow himself up, taking whomever is around him down in a massive explosion (by far, my favorite). Other characters can shoot rings of blades out from their bodies, blow stuff up, activate enhanced vision modes, heal themselves, execute quadruple jumps, run at lightning-fast speeds, and cause general panic and mayhem in their wake. All of these adrenaline special moves serve to provide some fun, unusual options to spice up the game play, and they do it quite well.

There really isn't much to speak of when it comes to plot or depth in the single-player experience. The story mode is laughable and excessively difficult in places to the point of frustration and loss of interest. That doesn't mean that a person without Xbox Live is totally left out in the cold, however. There are several challenges a player can undertake on their own that eventually lead to the reward of unlockable characters (always a good thing in a game). There are plenty of challenges to go around, giving the off-line player plenty to do. The big upside for those out there who don't have Xbox Live is that the game retains the popular "Instant Action" option, which fans of Unreal Tournament 2004 will be familiar with. This option allows the player to play against up to three computer controlled bots. And man, let me tell you, they're good. As usual, the Unreal engine's AI makes this title entertaining enough to play alone in single player mode.

Still, the true strength of the game lies in online game play. Nothing beats challenging your friends in no-holds-barred battles controlled from the comfort of your own couch.

And now, the obligatory section that talks about how pretty the game looks. And boy, is it ever pretty, especially for an Xbox title. The graphics are spectacular. The Unreal engine has once again outdone itself, presenting beautiful environments with marvelous special effects. The sound effects are pretty darn good, too. I love the fact that you can select the announcer from the classic Mortal Kombat games. So, yeah. That's all I really have to say about that.

But, despite all of its perfections, this game does have several flaws. First and foremost, there are absolutely no vehicles to speak of at all, whatsoever. Some of the new game types are also kind of weird and mean-spirited, like the Nali-Slaughter game type where you run around and try to kill more innocent bystanders than your opponent. Oh, wait a second ... I liked that game type. Never mind.

Anyway, the biggest complaint I had about the game was the fact that it is buggier than a roach hotel in the middle of New York City. I experienced lots of "exorcist moments" in which my field of view kept turning to the right. On more than one occasion my character froze in place without any weapons and I had to ask other players to kill me so I could move again. I've had numerous problems with laggy levels whenever my Xbox was not the host of a game, and on one or two occasions, the darn thing actually locked up my Xbox. I sure hope they will release an update for it online sometime in the near future, because it certainly needs one. Fortunately, though, these problems really didn't detract all that much from the fun factor of the game (which is what I grade the most heavily on). In some instances, there was great comedic value in taking my frozen spiney-headed character and making him break-dance as he was stuck in place, much to the delight and amusement of the friends who were watching me play at the time. But, if you're not into making the best of a crappy situation, you can knock the letter grade on the final score down from an A- to a B- if occasional weird bugs really make you see red and want to hurt small furry woodland creatures.

Overall, this is a game worth owning if you love to shoot holes in your friends and beat them senseless, yet realize that if you did this in real life you would get arrested. I mean, come on, who doesn't enjoy a good severe beating every now and then? Well, I mean that of course in terms of administering a severe beating ... not necessarily receiving one.

nice review. maybe I'll pick this up and we can administer masive beatings to each other.