My, how time flies. It seems like only yesterday I was unwrapping our brand new Xbox, marveling at its canned ham controller and some game called Halo. Now, with the May 12th unveiling of Microsoft's next console looming overhead and the number of quality exclusives tapering off, it looks like the green and black goliath is about to be put out to pasture.

Enter Jade Empire, the new role-playing game from Canadian uber-developers Bioware. If they sound familiar it's probably because they're the same team behind the 2003 Xbox role-player, Star Wars: Knights of the Old Republic: A major success both commercially and critically, selling a ridiculous amount of copies and receiving Xbox Game of the Year awards from just about every gaming institution that mattered. That's quite a pedigree to live up to. Good thing Jade Empire is capable of rising to the challenge.

The game takes place in ancient Chin...er, I mean the Jade Empire of the Far East, home to ghosts, demons, ninja princesses, and martial arts masters. You begin the game as a mere student, at peace in your humble town of Two Rivers until your village comes under attack by bandits and your master is kidnapped. What does any self respecting kung fu badass in training do in a situation like this? Go after the kidnappers and avenge your fallen brethren, that's what. Part revenge film, part art house martial arts epic, your adventure takes you across the continent and eventually into the heart of the mythical Empire itself. 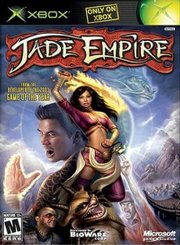 The game does an excellent job at establishing its own universe in which variations on traditional martial arts styles, elements of Chinese mythology, and advanced technologies can all coexist.

It accomplishes this through a unique visual style that matches its epic story with epic scenery. The ancient Chinese architecture and mythological creatures are beautifully rendered, as are the various open landscapes and villages. Characters are well animated (both in and out of combat) and cities teem with pedestrians all going about their daily routines. Various particle effects from spells or physical attacks occur without the slightest hint of slowdown and the combat is always smooth, no matter how many or what kind of opponents you face. The traditional Chinese soundtrack, albeit repetitive, matches the overall feel of the game as well.

Jade Empire's precursor, KOTOR, featured the ability to make ethical decisions that effected the alignment of your character. Choosing to help citizens or mediate situations got you light side points. Conversely, taking bribes or killing pedestrians awarded you dark side points. This system appears again in Jade, except now doing good yields points to the Open Palm teachings of honor and evil grants numbers to the Closed Fist discipline of strength. This is an interesting aspect of the game that creates a lot of replay value, since almost every situation you encounter can go differently depending on your dialog choices and ultimately determines the ending. While the path of the Open Palm has its own rewards in truth, it's really just fun to get rewarded for being a total bastard.

Scrapping the turn based, stackable action combat found in all their previous outings, Bioware opted for a real time system, in which you control your character's movements and attacks directly rather than give static commands, which would then robotically carried out. It is still possible to pause battles at anytime, but you can no longer heal or stack commands as you could in the other games by the developer.

Combat itself consists of five unique styles (martial, weapon, magic, support, and transformation) that you can map to individual directions on the D-pad. These styles can be changed out at any time during gameplay, which opens up a slew of fighting possibilities. For example: slow a character with a support style, then quickly switch to a fast martial style and make the most of their newfound vulnerability or assault an enemy from afar with magic and then change to a weapon style when you foe gets in close for quick, easy clean up.

While fun and easy to pick up, combat has some flaws that seriously detract from the overall experience. For one, it's repetitive. The three-hit combo your character starts the game with is the same three-hit combo they finish the game with, so get used to the same animations for any of the styles over and over again. Secondly, strategy is not important. You can fight the same way through the entire game. Whether it's against a meager thief or a towering golem the same tactic of "attack, jump over, attack, jump back, repeat" will work just as well. The game does have a simple combo system, in which you incapacitate an enemy with a support style and then attack them with a martial, but they result in a one-hit kill, which takes the fun out of fighting rather quick-like. The camera works fine during open field battles, but whenever you fight in closed quarters which happens to be most of the latter half of the game, you're almost guaranteed going to get stuck in a wall or spaz out at some point.

The behavior of your comrades in battle is also rather annoying, mainly because you can't control them in any way except to change their role in battle. Having them fight along side you is almost pointless since they are often unable to defeat foes on their own before being killed. It's better to just switch them to support mode. Under this mode your follower avoids battle and meditates. Their meditation assists you by filling either you health, chi, or focus.

My only other major annoyance I had with this game was the frequent and l-o-n-g load times. Loads between cutscenes, loads between combat, even loads between the trivial mini-games. They are everywhere and they disrupt the gameplay to the point of hair pulling, especially during subquests that require you to backtrack multiple times.

Minor gripes include an overall easy "normal" difficulty setting and the frequent and lots of backtracking during subquests. The unwelcome inclusion of the Dragonfly mini-game (a rip off of top down shooters like 1941) is at least compensated for by almost being completely optional.

Hardcore RPG fans will likely be turned off by the lacking customization options and its abrupt (by RPG standards) at around 20 hours first play. Personally I had no problem with the length, any longer and the game would've gotten boring. While the game did not feature the number of adjustable attributes as a traditional RPG, it isn't a traditional RPG. What do you expect?

Repetitive combat and week-long load times aside, this is an excellent RPG for the casual role-player. While it may lack some of the depth seen in other games of its kind, it is also a much faster paced game. All in all, Jade Empire is one of the last great games for a system whose days are numbered.