Perhaps the only way for a Hollywood film to diplomatically depict a conflict between Christians and Muslims is by setting the story nearly 1,000 years ago. "Kingdom of Heaven" is about as "fair and balanced" in this respect as one should expect from a post-9/11 release.

Director Ridley Scott uses the medieval Crusades as a metaphor for today's fundamental religious division ... and as an excuse for a rousing action-epic. Like Scott's "Gladiator," the movie simultaneously embraces and rises above the sword-and-tunic cliches that define it.

"To kill an infidel is not murder; it is the path to heaven."

So repeats a bystander in Jerusalem hoping to recruit soldiers to his cause. The interesting thing is that the man could be Christian or Muslim, because this same dogmatic ideal is being used to throw fire on an uneasy truce among the cultures that coexist in the Holy Land.

"Kingdom of Heaven" begins in 1104 (between the Second and Third Crusades) with Balian (Orlando Bloom), a recently widowed French blacksmith, being recruited by the Crusader knight father he never knew (Liam Neeson) to accompany the man to Jerusalem.

Orlando Bloom, left, leads his knights into battle during the Crusades in Ridley Scott's action epic, "Kingdom of Heaven."

Already enduring a crisis of faith after his wife's suicide, Balian initially balks until a village priest informs him the quest "may relieve your wife's position in hell."

Before long, Balian has inherited his father's standing and is thrust into a power struggle between the caretakers of the walled city. Baldwin IV (Edward Norton) -- the Leper King -- holds a tenuous rule, philosophically flanked by peaceable knight Tiberias (Jeremy Irons) and warmongering baron Guy de Lusignan (Marton Csokas). Balian also gets scabbard-deep in a romance with Baldwin's sister, Sibylla (Eva Green), who is married to de Lusignan.

Meanwhile, the formidable Muslim leader Saladin (Ghassan Massoud) waits outside the city with a force of 200,000, poised to use recent Christian atrocities as an excuse to reclaim the territory.

Director Ridley Scott uses the medieval Crusades as a metaphor for today's fundamental religious division ... and an excuse for a rousing action-epic. Like Scott's "Gladiator," the movie both embraces and rises above the sword-and-tunic cliches that define it. Orlando Bloom stars as a blacksmith who becomes a reluctant Crusader.

Sure, the who's and why's of "Kingdom" are initially confusing -- probably the result of all the characters in the film with the exception of Neeson's being based on historical figures. Scott and screenwriter William Monahan try to bring some factual resonance to the project, and they succeed at detailing the politics and scope of the Crusades.

Like "Troy" and the last two "Lord of the Rings" flicks, the movie centers on a siege. But rather than concentrate solely on the catapults and ballistas, the piece becomes more of a mental chess match between Balian and Saladin.

This leads to a refreshingly un-Hollywood ending where the real victory comes at the hands of diplomacy not the hilt of a sword. 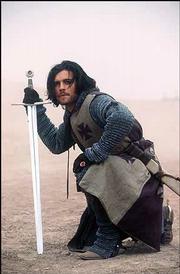 Balian (Orlando Bloom) prepares for battle in the historical drama "Kingdom of Heaven."

Fortunately, the overall visual design adds authenticity to the images. Despite being shot in Spain and Morocco, the movie does a fascinating job of recreating the cosmopolitan Jerusalem. Even when Scott is a bit heavy handed on the production design -- as his penchant for countryside scenes where snow and/or ash chokes the air as if the knights were removing asbestos -- "Kingdom" captures the feel of the Middle Ages better than most epics.

If only another actor besides Bloom were at the center of the film.

Having gained 20 pounds for the role, the young Englishman still looks a tad wispy to be slashing his way through scimitar-wielding warriors. It's easy to picture the surly Russell Crowe out-dueling fellow gladiators, yet Bloom always seems a bit more like a guy waiting in line at a Coldplay concert.

"Kingdom of Heaven" doesn't always make sense. It's reasonable to conceive how Balian rises in the ranks of the military based on his bloodline, but it's a total stretch how the career blacksmith becomes an overnight expert in siege warfare. There isn't even a cutaway scene of him reading a textbook or something about it.

Still, the film scores points for tackling a historic event of modern relevance in bolder colors than black and white. "Kingdom of Heaven" understands that one man's infidel is another man's saint.

It is a matter of historical record that Muslim violence - in the form of a jihad - was responsible for Christians striking back, hence the Crusades. Yet in the film, it is the Christians who are the bad guys.

This is on the order of doing a movie on the Warsaw Ghetto and blaming the Jews for all the violence.