Donkey Kong has really had an odd career so far. He started out as a nefarious barrel-throwing maniac. From there, he realized the error of his ways and started going on banana quests with his pal Diddy. A few go-kart races, tennis matches, and rounds of golf later, and DK is a new man (or:tie-wearing gorilla). Now, he pretty much just chills out and plays bongos.

As is usually the case in the Mario universe, the story is a bit odd. Actually, saying there's a "story" in Donkey Konga 2 is a little misleading. There's a blurb in the instruction manual about everyone going on a world tour due to some ribbing by Dixie, but it really doesn't matter (nor should it really). You won't be bothered by ridiculous cutscenes or story progression, and I can't imagine anyone would really want that in a bongo game. The entire point of Donkey Konga is playing the drums, and it thankfully doesn't stray far from the core gameplay.

There's really not a main single-player mode, but rather several different modes to play. Most of your time will be spent in Street Challenge mode, which allows you to play through the games' 25+ songs on three different difficulty settings. Initially, only Monkey and Chimp settings are available, but you can purchase the Gorilla difficulty with coins you earn. 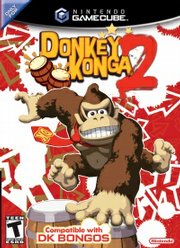 Challenge mode is extremely challenging, as it forces you to go through either a 6 or 12-song set. Throughout these sets, a meter will gauge how well you're playing. Play terribly, and it'll drop to 0, ending Challenge mode immediately. Play the song well, and you'll get a little of your meter back and go on to the next song. There are also 2 mini-games: Barrel Race and Rhythm Keeper. Barrel Race is a "vs." minigame in which you and an opponent race to clear notes. The screen is split vertically like a puzzle game, and various notes will drop from the top of the screen. You have to madly hit the notes as fast as you can to clear them, and you get punished by frozen controls if you miss one. Rhythm Keeper is decidedly more challenging, as it requires you to have nearly perfect timing and rhythm (as well as some memorization). This mode starts out by showing you a simple beat with a certain intervals between each note. You can play along with these notes for a bit, but then the indicators disappear, forcing you to keep up the rhythm yourself. This mode gets harder and harder with each stage, and it's actually very fun.

Donkey Konga 2 can be played with a GC controller, but it's clearly meant for the bongos. For those that haven't played the first game, the gameplay revolves around you hitting the drums according to on-screen indicators. There are four different inputs with the bongos: Left, Right, Both, and Clap. The game mixes this up a bit by making you do rolls from time to time. There's actually a few ways you can activate the "clap" input without actually clapping. You can blow into the sensor (good for rolls), or simply tap the sides of the bongos. The bongo controllers are a blast to play with, and it's really hard to not have fun with the game. If you want to play multiplayer, make sure you have more bongos, because the controller just doesn't cut it. Playing with a controller just makes the game feel like a watered-down Parappa the Rapper (sans hilarious lyrics).

If you've never played the game before, it can be pretty overwhelming at first when the notes come fast. Even after playing for a while, it can get bewildering if you've just been delivered an onslaught of notes and you miss one. Missing one note in a quick series can throw you off tremendously, and cost you several further missed inputs. The difficulty of each song is indicated by a banana-based difficulty scale on the song-selection screen. A two-banana song will be fairly slow and simple, while one with eight bananas will keep you drumming fairly frantically. Monkey and Chimp are both fairly manageable, but Gorilla mode is ridiculously difficult, and only hardcore Donkey Konga players will be able to master it.

Playing well and hitting the notes on time will earn you coins. Standard correct hits will earn you one coin each, while "Great" hits will earn you two. These coins allow you to unlock certain rewards, as well as play the Barrel Race and Rhythm Keeper games. The most important unlockables are the Gorilla-level songs, but you can also buy alternate sound sets for your bongos. Honestly, the sound sets are pretty annoying, and I'd imagine most gamers will just stick with the standard "Bongo" setting. There is also a basic card-matching minigame that unlocks badges featuring Nintendo characters. These badges are pretty much useless, as they're just tags for the high-score list.

Donkey Konga is a great idea, and can be great fun, but suffers tremendously in the area that's most important: song selection. The original Donkey Konga featured some older, classic songs like "Louie, Louie", "We Will Rock You", "Wild Thing", and "What I Like About You". On top of those classics, it featured some extremely fun renditions of Nintendo themes such as Zelda, Mario, and the hilarious DK Rap. These video game themes really made the original Donkey Konga feel like a true Nintendo game, and DK2 sadly does not. There are literally no video-game themes (unless you count the Donkey Konga 2 theme), and close to zero classic songs. No more Kinks or Queen, we now have Good Charlotte and Hilary Duff. Don't get me wrong, there's no problem with having some current pop music on the track listing, it just becomes a problem when that's almost ALL it has. Outside of "La Bamba" and R.E.M.'s "Losing My Religion", there are almost no songs that aren't catered to the current TRL crowd. I'd also like to mention that it's very odd (albeit hilarious) watching a videogame gorilla drum wildly to "Losing My Religion".

Donkey Konga 2 is a very fun game, but I can't help feeling it could be so much more. They entirely ignore the rich Nintendo heritage that they played homage to in the original Konga, and replaced it with some very sub-par songs. On top of this, the core gameplay hasn't changed at all. There are a couple new fun mini-games, but they aren't enough to make it better than the original. If you already have the bongos, DK2 is fun enough to pick up or rent. If you're new to the Donkey Konga series, just pick up the original game with the bongos. It's got the same fun gameplay, but surpasses this newer installment in the extremely important area of song selection.