Not exactly what Outbreak fans were hoping for

Creativity and innovative gameplay drive the video game industry. If a game does not grow or evolve into something new and fresh, the series can get stale and fade away. The Resident Evil series was on the verge of becoming a game franchise that would only exist in our memories. However, Capcom has done a fine job retuning the RE series by trying new forms of gameplay. Resident Evil 4 is one example from earlier this year, while Resident Evil Outbreak is a spin-off of the main series in which RE goes online with team-based gameplay.

This is the second effort for Capcom and right from the start you notice that Resident Evil Outbreak File 2 is more of an expansion pack than the next game in the series. There are virtually no changes in the game. They might have added some extra stats, but nothing that made me cry in awe. If there was one significant change then it would have to be the option for Devil May Cry controls. No longer is the gamer confused by first-person perspective controls. This helps a bit but can get in the way when the camera switches angles. What use to be walking forward will turn into walking to the left when the screen changes. It's a minor issue that is easy to get used to.

These problems are pretty much beside the point when it comes to overall enjoyment. The main problem is that you still can't use keyboard chat online, which continues to plague the series. The only means of communication with your online partners is by gesturing and using predetermined phrases such as "Help!" or "Go." It's lame and bogs down the enjoyment of playing online. New players will have problems learning what to do in each scenario. It's also frustrating as a veteran because you won't be able to explain or help them because all you can do is yell his or her name and ask for help. 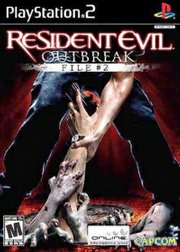 For something positive, the levels have improved. It's understandable as File 2 is more of an expansion pack of scenarios than a new game, meaning the focus is on the scenarios. This is good and bad because once again this makes it hard on beginners. It should be obvious now that beginners are better off starting with the first Outbreak. It

had been a while since I played the first and it took me a decent amount of time to remember my old skills. The levels include complex situations of escape, attack and survival. You'll tread through the levels as if you are on life support. The game seems to allow a lot of damage to the characters, at least more so than the main RE series. This is good because as you are injured your character will begin to move very slowly. You'll eventually become so weak that you will require help to get up. This was a great feature in terms of suspense and realism. All the same gameplay elements have returned. There are many different co-op maneuvers, like the one just mentioned or others such as lifting someone on their shoulders or trading items.

Up to four characters can participate in a scenario. You'll have eight main characters to choose from, each with special actions. Kevin the policeman, for instance, has a critical shot that deals more damage with handguns, and George the doctor can dodge-tackle an enemy. The characters come with their own equipment as well. This doesn't mean you can't switch or pick up new items; these are just preequiped items. George, being a doctor, is a healing character. He comes with a medical set that turns herbs into capsules. Shooting the capsules at his partners can heal them and clear up poison ailments. There are also characters with tool sets to fix objects, a lock pick, a lucky coin and more. When it comes down to it, though, the character you pick usually doesn't matter. Everyone seems to end up with a shotgun or handgun at the end of the scenarios.

The game rewards you with a result point system. This unlocks new characters, art galleries and other hidden items. There are some enjoyable costumes and new characters that can be unlocked, but I won't spoil those. You'll have to work to discover them. Working to get the unlockables is a mean task. Because the scenarios are so difficult to pass with the communication problems and all, getting these unlockables can be daunting and, quite frankly, not worth it.

The game does have its moments, however. There was a time when my group split up in pairs and about six zombies mobbed my partner and me. They overtook us and I took a pretty hard hit. I fell to the ground and started crawling away but it wasn't nearly fast enough. My friend came back, picked me up, flung my arm around his shoulders and carried me out of the room. The reason it was so enjoyable was because it was extremely tense. The emotion of desperation that you get when you can't get up is what makes the game fun. There are many experiences like this that deliver chills and goose bumps.

As visuals go, the game looks basically the same. The game doesn't look near as good as the main series, but it still can make you jump and sit at the edge of your seat. The sounds are pretty much on par with the visuals. You'll hear ambient music that intensifies with the scenarios, along with blasts of shotgun shells and rocket launchers.

Capcom definitely has a closet game waiting to break out, but the absence of keyboard communication is too big of an obstacle to overcome as a gamer. I don't understand why Capcom continues to leave this feature out. RE is not a run-and-shoot game. If this were the case, I can understand chat not being needed. Hopefully Capcom is saving the game's big leap with a real sequel and not another expansion pack.