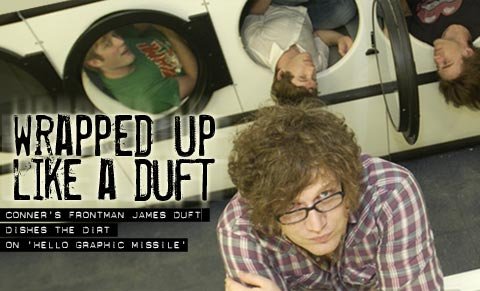 "I don't normally do this," he explains. "But I haven't even played these songs for my girlfriend yet."

Indeed, it takes a lot of discipline to keep great records under wraps. Wilco and Fiona Apple couldn't do it, so why should we expect a relatively small-time band in our own backyard to get all Metallica about protecting their intellectual property?

Whatever their motives, Conner has stuck to their pact to not leak any of "Hello Graphic Missile" before the album's release date. Eight of the album's twelve songs have never been performed live (locally, at least), and - at least according to Duft - NO one outside of the band has heard the album yet.

So thanks James, for making me the first. In exchange, I promise to not to even mention The Strokes this time around.

Hello phallic missile
The year is 2005 and the rock revival has officially come and gone. Face the facts, people: "Hot AC" is still kicking rock stations off the dial; Kelly Clarkson is still outselling The Killers; and Green Day's resurgence has more to do with eyeshadow and Blink 182 than The White Stripes or The Strokes.

While the rest of the rock world binges on Pro Tools and Prozac, Conner has been holed up in a home studio equipped with tube amps and a smoking-ban ban. Guitarist Tom Wagner's backyard playground (properly known as Underground Sounds) serves as the band's de facto Abbey Road - a place to get lost, watch some "King of Hill" reruns and just maybe make a hit record.

At the forefront of the operation is Duft, the imposingly tall lead singer who still listens to Fugazi and Thelonius Monk more than The Killers and Bloc Party (though he does admit reverence for the latter two). Duft is the kind of musician who isn't afraid to stop a song midstream to berate a lackluster audience; the kind of musician who names albums after bizarre dreams with talking dogs.

"It was actually a white dog in a room with just a window,'" Duft says of the phantom canine who revealed to him the title of Conner's new record.

"We liked (the title) because it's sort of phallicky in a way and very funny. The album's kind of that way ... sexy, but not sexual. It's not like 50 Cent or something like that - we're not talking about like smacking bitches up and having sex or anything - but it's kind of sexy."

Clear, yet entirely confusing
As promised, "Hello Graphic Missile" delivers its share of surprises. Though true to the quick-and-dirty live aesthetic forged on the band's debut "The White Cube" (2003), the disc injects blues shuffles, disco beats and sassy ballads into Conner's already incestuous '70 rock sound. From a modern perspective, the closest thing is probably Kings of Leon; on a broader scale, it's all about the classics - Iggy Pop, David Bowie, Creedence and The Stones.

For those who enjoyed "The White Cube," the biggest shocker on the new album may be the clarity of Duft's vocals. Since their first Lawrence show four years ago, Duft's vocals have been jumbled masses of syllables lent to choose-your-own-adventure interpretations.

"Last time I think I was writing more personal, heartfelt lyrics. In a way, (mumbling) was almost like a safety mechanism," Duft says. "This time I feel like I've hidden everything a little better, to where I'm still conveying the things I want to convey, it's just not as point blank."

In the studio, Duft cozied up to the microphone instead of shouting at it from five feet away. As a result, his playful and innuendo-thick verses are actually halfway intelligible.

"It's kind of like a pseudo concept-record in a way," he says. "Essentially in the thought and planning it's a concept record, but in actuality it's not really a concept record ... It's less like I'm telling a story and more like I'm just trying to paint a picture of a scenario that doesn't really have any resolve or point."

He pauses and adds: "If that makes sense."

Regardless, it's not like anyone knew what "Beast of Burden" meant, but it's still a sick song.

Watch them jumpstart
Conner will handle the release of "Hello Graphic Missile" themselves, a process than Duft likens to the early days of Guided By Voices - producing the records at home and screen-printing the artwork.

"It's kind of a statement to ourselves more than to anyone else," Duft says. "We don't need to be spending craploads of cash to go and get somebody pressing it ... we can do it ourselves and it can be a good record and it can look nice."

Conner's homespun approach is also an indication that "getting signed" isn't an urgent priority. According to Duft, the band has had conversations with both major and indie labels, but nothing is currently in the works. Part of the band's frustrations stem from the lack of artistic control afforded by modern labels - the "if you can give us five more songs like 'Silent Film Score'" tactic that several A&R guys have pushed on the band.

For the time being, Conner's DIY ethic is a perfect fit for a band that's earned its local following by playing dozens of raucous shows up and down Mass. St.

And thanks to Wagner's Underground Sound Studios, "Hello Graphic Missile" sounds a heck of a lot better than any of those early GBV records.

"Sometimes it's more fun to just sit in the basement and jam on your guitar and enjoy your music yourself," Duft reflects. "You spend all this time on your art and then people just chalk it up to being like, 'Well, I'm at this bar getting drunk watching this pop band.'"

I just bought your new cd Saturday night at Jackpot and I'm really pissed because now it's finals week and I can't stop listening to your sexy songs even for a second to study. LOVE IT!!!

Hey guys, Sounds great, even from all the way over here in S. Korea. Can't wait to get a copy. Jesse

james you are so hot and kick ass! i love conner so much. i saw you opening up for the killers and now i'm hooked. much love and i hope you come back to indianapolis! -jackie