I consider myself an optimistic gamer, and go into games with an open mind regardless of either good hype or negative press. Prior to the release of Wrestlemania 21, I had heard some pretty negative things surrounding it. Regardless, I kept an open mind. I reminded myself that I have always enjoyed wrestling games, dating back to the NES. I was an avid fan of WWF RAW on the Sega Genesis, as well as all the THQ wrestling classics on the Nintendo 64. Now, it's been several years since I last watched wrestling on TV, but I still found myself enjoying the Smackdown series of games. Surely Wrestlemania 21 would just be another in the long line of wrestling games that I've enjoyed.

I don't think I've ever been more wrong in my life. Wrestlemania 21 may be the most buggy, unfinished and downright unplayable title of this generation of systems. I usually have a lot to say about any game I play, but WM21 almost puts me at a total loss for words.

There are good points (don't worry, this shouldn't take long). The graphics are extremely sharp, and the superstar character models look very lifelike. Audience animations are probably the most impressive I've seen in a wrestling title. On top of the lifelike graphics, the actual WWE superstars lend their voices to the game, helping the story mode cutscenes tremendously. Jim Ross and Jerry Lawler do the commentary for the RAW broadcasts, while Michael Cole and Tazz do the Smackdown broadcasts. 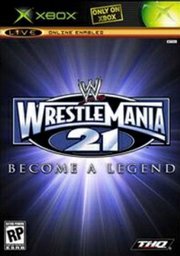 The story mode features your created wrestler rising through the ranks of the WWE superstars. You'll start out as some no-name jobber on Velocity, but soon find yourself getting involved in feuds on Smackdown, RAW, and eventually Pay-Per-Views. Unfortunately, no matter what your character looks like, he features the same voice and always acts like the same cocky idiot in cutscenes.

Saying the game features a create-a-wrestler function seems somewhat generous. It's more like a "play dress-up with a wrestler" mode. It's extremely limited, and looks downright foolish in comparison to the Smackdown series' extensive CAW mode. Even the menus don't make sense. For example, you have to go into the "Complexion" menu, and then either "Young" or "Aged" to access facepaint for some inexplicable reason. I also wondered why the "Football Jersey" is just a plain white T-shirt. There is no apparent way to alter individual body proportions, so your CAW will look fairly generic no matter what. Costume selection is very limited, and you can't even preview different clothes and hairstyles without selecting them. It's really a guess-and-check system, and it's terrible.

Throughout the story mode, you'll earn money that you can spend on various items such as WWE Legends, arenas, weapons and attribute points. Unfortunately, unlike every other game ever made, you can't apply these attribute points during the career mode. After matches, it gives you the option to go to the WWE Shop, which, upon being chosen, exits you completely out of the career mode. You then have to apply the attribute points, go through the extremely lengthy save process and re-enter the story mode. "Baffling" is the only appropriate word I can think of when it comes to certain aspects of this game.

Now, if those points weren't bad enough, here's where the REAL problems come in: At some point, you actually have to play the game. Within the first minute of starting my first match, I witnessed enough AI malfunctions to fill any other entire game. Rene Dupree knocked me out, then proceeded to run back and forth over my prone body around eight times. I pondered whether he was setting up some kind of big move, but that wasn't the case. I laid on the ground for a while longer just to test and see what the AI would do. He stopped running, then started running the other direction over my body around six more times. He then exited the ring, re-entered the ring, then randomly walked around and punched the air for a while. Watching the AI attack phantoms and randomly move around is genuinely more fun than playing the game.

During a multiplayer match, my opponent hit me well over 150 times with a ladder, and there was no way whatsoever to get out of this horrible endless cycle. The instruction booklet makes mention of the shoulder buttons performing reversals, but I'm almost convinced that had to be a typo at this point. I did witness reversals on occasion, but they seemed entirely random in nature. Oh, and did I mention that almost every single match can be beat by performing the same submission move over and over and over again until your opponent submits? I'm not talking about knocking your opponent down, then performing the move, then knocking them out again when they get up. I'm saying you can initially knock your opponent down, then do around 7 or 8 end-to-end submission moves and win the match in less than a minute.

The collision detection seems entirely non-existent. At one point, I performed an armlock on an opponent while I was at least 15 feet away from him. Your characters will warp around the ring, get magically stuck on ladders, and completely miss elbow drops even though you clearly landed them. One glaring glitch occurred during a Table match. I had the opponent beaten to a pulp, without so much as a scratch on me. I placed him on the table and prepared to put him through it to win the match. Suddenly, both of our characters mysteriously warped into an entirely different position: him putting me through the table. There was literally no transition. He was lying on the table, then suddenly he put me through the table and won the match. It should also be noted that when I say "put me through the table", I mean "slammed me onto the table, which then sunk into the ring and disappeared". I challenge anyone to go through one full match of this game without encountering a horrible glitch of some kind. It won't happen.

Wrestlemania 21 features all the standards: Cage matches, TLC matches, table matches, etc. These are all playable on Xbox Live, but I can't imagine why anyone would want to. I honestly can't think of a single reason to recommend this game to anyone. Every Smackdown game, as well as every N64 THQ wrestling game is far, far superior to this unfinished embarrassment.