The touring company of "42nd Street" rocked a sold-out Lied Center on Wednesday evening, giving the enthusiastic audience a pleasant refresher course in the big American musical. With a cast of 21, an ensemble of 32 and a 12-piece orchestra, this troupe filled the stage with color and motion, comedy and music for a fast-paced 2 1/2 hours.

This 1980 musical, based on the 1933 movie, delivered more than a dozen familiar songs, mined from that movie and other '30s movies.

A musical like this can do many things well, and this one did. But it lives or dies by big tap numbers, a cornucopia of costumes and big brassy sound from the orchestra. Undoubtedly, this performance was electric by virtue of just those elements. And the timing throughout this huge and complex show was crisp, quick and precise, a credit to director Valerie Gardner Rives.

Gower Champion's elegant choreography, re-created and staged by Randy Skinner and Rick Conant, was danced with breathtaking energy and synchronization in number after stage-filling number. The orchestra, conducted by Kym Purling, set the pace and pointed the action, never missing a note and becoming an audible mirror of the scene onstage. The costumes dazzled in their variety and quantity, and tempted one to imagine the maelstrom backstage between numbers as the whole ensemble quick-changed.

Mara Davi as the show's chorus-girl-turned-star answers perfectly to the requirements listed at her real-life California audition for the part: "must be a superb tapper and a good singer." From her first appearance onstage to audition for the fictional show "Pretty Lady," the 21-year-old Davi leaves no doubt of her dancing ability, as she repeats in double-time each tap routine demonstrated to her character, Peggy Sawyer. 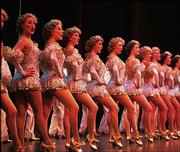 Ron Smith plays Julian Marsh, the director of "Pretty Lady," to perfection. He makes the character credible as a hard-driving director, and is a commanding presence onstage at all times. He also exudes a distinct sensuality to which Peggy is susceptible, and his warm baritone as he croons "Lullaby of Broadway" to her makes one wish for more songs from him.

Natalie Buster has the difficult task of playing the mostly-unpleasant egocentric star Dorothy Brock, whose broken ankle gives Peggy her big chance. Ms. Buster renders Brock's imperious airs and vicious snarls so well that the audience feels no regret when she must leave the show. The script also gives her a redemptive scene, nicely played, in which she gives the new star her blessing.

Billy Lawlor, the romantic lead, is portrayed by Kyle Dean Massey, a 2004 graduate of Southwest Missouri State. Lawlor's trademark is the striking of attitudes, and Massey does this with verve, as well as meeting the demands of the part with a solid tapping ability and flexible tenor voice combined with real stage presence.

Notable comic turns as co-authors of "Pretty Lady" are given by Maureen Illmensee as a plus-size Maggie Jones and veteran Evan Alboum as her diminutive partner Bert Barry. The part of dance director Andy Lee is played with grace and panache by Jeffery Williams Jr.

At evening's end, the audience members rose together in a genuine standing ovation, rather than the more familiar Lied experience of a scattered few attempting to shame the rest of the crowd into standing. This one was deserved by a talented, disciplined and hardworking company, nearing the end of a seven-month, 60-city tour.

Dean Bevan, professor emeritus of English at Baker University, can be reached at bevan@ku.edu.