One of the most refreshing, original titles of the year

Many times good or even great games go under the radar based on the fact that they're too strange or weird for commercial acceptance. The Earthworm Jim games of the 16-bit era were both excellent, as was Konami's horror spoof Zombies Ate My Neighbors, but none of them really saw the sales they deserved. If you read the gamer blog you've probably heard quite a few things about Katamari Damancy or Gitaroo Man, two great games that only appealed to a small audience of people willing to take a chance on something a little -- OK, very -- offbeat.

The latest entry in this long-honored tradition of quirky, fun games that only sell 100 copies is Psychonauts, a new platformer from developer Double Fine Studios.

The brainchild of Lead Designer Tim Schafer, the man behind the acclaimed LucasArts PC games Grim Fandango and Full Throttle, Psychonauts takes place at the Whispering Rock Summer Camp, a place where psychically adept children go to hone their brain power. You play as Raz, a former circus performer who dreams of becoming a Psychonaut, a member of an elite psychic task force. 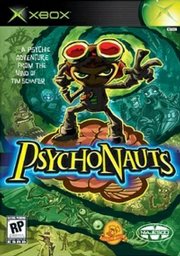 The game's balance of familiarity within both the environments and character types while at the same time maintaining a distinct and hilarious visual style creates an overall sense of deja vu. Equal parts foreign and familiar, it revels in the use of isometric camera angles and asymmetrical levels, structures, characters, pretty much everything (at times I felt like I was playing Tim Burton's Psychonauts). The character design and cartoony voice acting give life to the usual cast of campers, making them more than cardboard cutouts we've seen before in movies like "Porky's" or "Meatballs" (if you don't laugh out loud at least once at Ford Cruller, you're either a robot or you have no soul). And while we're on the subject of humor, this is one of the funniest games you'll ever play. The characters, objectives, story -- just about everything in this game is funny on some level.

The majority of the humor comes from the gameplay itself, which centers around entering into the dysfunctional minds of various people who stand in the way of your progress. Schafer and his team does something that very few developers would ever attempt: creating levels that reflect mental illness, all the while maintaining the humor and comedic tendencies established in the rest of the game. The level variety created through these depictions is easily the game's greatest feat. The Paranoia in "The Milkman Conspiracy" level creates a disjointed suburb complete with spies in trench coats attempting to pass as everyday people like road workers and grieving widows. The post traumatic stress disorder of Coach Oleander produces a war-torn battlefield that features exaggerated Bowie knives, downed ships, minefields and combat-ready bunnies. Even common anxiety gets its due, as a frightened lungfish sees you as a Godzilla-like creature in his mind's eye.

Once inside one of the characters' fragile psyches you'll find the Psychonauts' versions of the usual platformer staples. Like most games of this type, abilities you gain within a level are used to solve puzzles in the current mind and yield pathways to secrets in previous areas. The run-and-jump element of the game is, for the most part, solid, but there are a few times where camera placement makes it difficult to perceive how close or far away you are from a ledge or platform. If it were only possible to lock and unlock the camera in a better position it would have helped tremendously. The platforming bits themselves are well designed and implemented, especially in a segment towards the game's end that has you ascending to the top of the circus to avoid rising water. For all of the care that Double Fine took in constructing these areas, many of them can be simplified or avoided altogether once you earn the levitation ability. Bosses are also present and contain the same level of style and detail as the rest the game. Many require you to use at least one if not a combination of your psychic abilities to successfully hurt them, but their repetitive patterns make them rather easy to dispatch, especially the final boss, which requires only patience and button mashing.

In the same vein as many of games in this genre, Psychonauts requires you to find things. Lots of things. Each time you collect 100 figments of imagination your Psychonaut level increases, granting you a new power each time you gain ten levels. Unlock vaults and pair emotional baggage with its proper tag to view hidden memories. Collect mental cobwebs and trade them in for new abilities. With all of these tasks available in each of the game's 10 levels, I hope you like scavenger hunts, because that's what it feels like after the second or third time you search for additional trinkets. While most of these tasks aren't mandatory, save one (hint: save up for the cobweb duster), it's too bad that a game with such an original visual style and story falls prone to so many of the cookie-cutter elements found in so many other platforming games.

That's the biggest flaw with Psychonauts -- its core gameplay falls prone to too many of the tired conventions, mainly fetchquests and backtracking, that we've seen since the SNES days. That being said, it along with the minor camera problems and easy bosses are not enough to detract from an overall great gaming experience. In a world filled with rehashes and cheap market cash-ins Psychonauts stands out from the crowd for a number of reasons (unique style, presentation, characters, offbeat humor and story), but none so important as this: it's original.