Microsoft scores with its answer to Gran Turismo

From the start, it is completely evident where the developers spent the vast majority of their time -- on the cars and physics. These are great places to spend time on a racing game, but it leaves other elements out to dry.

Forza Motorsport puts the player in total control of his motorized destiny. You start your career mode picking from one of three starting locations (North America, Europe and Japan), which dictates which type of cars you start with and some of the early races but doesn't limit the total cars or tracks available. You are faced with a seemingly endless number of races that have a bunch of different requirements that must be met, from car class to maximum horsepower and otherwise. These races earn you credits that can then be spent on improving your current car or purchasing a new one. This allows you to either get attached to a particular vehicle by upgrading it or just go with a new car at every chance and try to be the best with the most expensive hardware. Either way you will spend hours checking the specs of each car and testing them to see what fits your style best. And believe me, style of play is a large factor in this game because of the amazing physics. This game allows you to race however you feel is best. If you are a drifter by heart, then just slide around those corners all you want, but if you want to do the total control turning, then go for that. The single player completely comes down to what your style of racing is, not just the cars. As a bonus you can use any car purchased in campaign anywhere in the game. If you get tired of racing by yourself you can always take the campaign online against humans, but you definitely risk losing a lot more often than off-line. 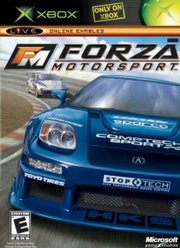 Though the campaign mode will take a while to complete and really introduce you to the mechanics of the game, you could easily pass it by and only play the additional modes. However, you then would miss out on the customization aspect of the game. The arcade is fun to just pick up and play. The arcade has all the cars and tracks available, but you must progress through it all to unlock everything. This adds an addictive element to the arcade similar to that found in the campaign. Then there is the eight-player online racing, which will really test your mettle as a racer. You can choose from any of the car classes, play in unranked or ranked games on any of the tracks, and set the difficulties to best suit your desires. Online you can use any car that you have earned in your campaign or a stock car. Your friends list is available, and you can join a clan, called a car club, which further opens up the number of races available because there are car club challenges to take part in. The developers even felt it necessary to throw in around 1400 leader boards for you to compare scores with the top players in the world. These boards allow you to download the racer's ghost, replay, and even the car setup, which would allow you to setup a car exactly like the leader (or anyone else's for that matter). Overall these features add much needed depth to the racing genre and extend Forza's life exponentially.

Some players may be initially turned off by the simulation aspect, but in reality the game is extremely accessible. Unlike the demo that shipped a while ago, the assists really do work and make learning easier. There is traction control, anti-lock brake control, stability management, automatic transmission, and my favorite -- suggested line. The suggested line is ideal for those who are not huge racing aficionados because it helps you better gauge turns. Now, you could play the whole game with the assists on, but then you would miss out on the hardcore simulation that is offered by Forza -- and you won't earn as many credits after a race. Another nice aid is the Drivatar. This is a computer model of you racing that you can have race for you on any race, but again you will pay a price to use it. The Drivatar is most useful as a training tool, because you can race against it and the game will tell you how well you took each turn and thus improve your overall racing abilities. My biggest gripe about the Drivatar is that there is no explanation for why you can take one turn worse than the other. In the end, though, that is a minor issue compared to the benefits of the Drivatar.

Forza's graphics rival that of any other racing game on the market. The tracks are not flashy and are either very accurate replications of the real places or well-made fictional tracks. They have no extra bright colors to give a pizzazz or false excitement to them. To some this may be a turn-off, but what it does is allow the player to focus on the look of the cars and how your personalized paint job looks rubbed off on the railings or flying by your best friend. The cars are as smooth as butter when you start the race, and they will end up that way, provided you drive well enough. But if you happen to misjudge a turn, then the decent damage models come out. The damage model doesn't allow you to completely trash a car until it doesn't run, but you can break glass, lose bumpers, scrape paint, and, if the simulation is completely on, then you will lose almost total use of the car. Even with all these features the damage model feels a little out of whack at times because sometimes a light wall tap will destroy your steering while a huge collision will do little more than take out the lights.

The sound of the game holds up fairly well too, due to the great engine and road sounds. Every car sounds different, and any small change or added part changes the car audio. This allows you to not only customize the look of your car, but if you really like the way one sounds then you can just set it up to sound that way. The music shipped with the game isn't too shabby but isn't my ideal driving music. It consists of covers of rock hits without any vocals, which isn't a bad decision, but the customizable soundtrack option is where it is at. The best music to race to has to be funk or disco, seriously.

The A.I. in Forza is at times extremely brutal and/or submissive, but at all times it is slightly schizophrenic. The harder you set the A.I., the more intense the races will be. You will face opponents who turn more accurately, have better cars and have fewer inhibitions. There will be times where the computer intentionally tries to take your car out. You could be passing someone and all of a sudden he turns in to you and spins you out. Yet, in all difficulties, some cars will try to stay clear of you as you try to pass and so slow down or swerve well out of the way. The most bizarre problem is when a car will suddenly veer sharply to one side or the other and then straighten out again; it is like the car lost track of where it was for a second and decided to turn as opposed to go straight. Overall, the computer opponents provide ample challenge and are fair enough to race against.

However, for as much racing as there is in this game, there is plenty of time spent in the menus. In general the menus are well organized and easy to flip through with little delay between choosing one and it appearing, but they are all static. There is no background video playing like in MotoGP2, which would make the menus less monotonous. The only time the menus are ever spruced up is when you are choosing parts to put on your car, but then it is just a view of the performance changes being applied or your car with the new parts added. Overall this could have been improved, but again it just makes you want to race more instead of stare at the menus.

With the current Xbox's life coming to an end in a few short months with the release of Xbox 360, it is surprising to see quality titles still being produced and released for it. This is doubly surprising when a game has been delayed for so long, but thank goodness Microsoft hasn't given up on the Xbox. Its current venture into the racing genre is a surefire success, albeit with some strange A.I. and boring menu, that will only lead to bigger and better products for the next generation.

Nice review. What are your thoughts about it comparing to GT4?

see we do read each others reviews. and honestly, i didn't make that tag line up there (i forgot to add one, my bad), and i haven't played gt4 but for a minute or two at a friends house so i don't feel comfortable making any statements. if i had to guess though, i would say gt4 is better looking in general (it has those colorful exciting environs to complement the cars) but its physics system pales in comparison to forza's. for example forza recalculates physics 240 times a second while gt4 is only 60 and all this data is then presented in an amazing format during a replay of the race. for real physics/engineering nuts like me it is nice to finally be able to put my "knowledge" i am getting in college to use. also forza provides a more realistic approach to collisions, but in the end that really doesn't matter. what matters is the racing and my guess is that they come out equal. gt4 has more experience behind it, but forza has extreme passion behind it which overshadows some of the minor flaws because of the detail and crap load of extras in there.

so after saying i don't feel like comparing, i guess i did, but i'm not gonna say which is better cause i don't know.