Deep, colorful and vast, Stones enhances the series like it should

The continent of Magvel is in peril. The nation of Grado has suddenly decided to invade the nation of Renais, breaking the code of the five sacred stones. These stones were used to rid Magvel of evil monsters centuries ago. After peace had settled throughout the land, one stone was given to each of the five nations to symbolize peace. That peace has been disturbed, and it's up to a new band of warriors and heroes to save Magvel once again.

Intelligent Systems broke into the gaming industry with the ever-successful Advance Wars. Its debut on the Game Boy Advance has been critically acclaimed, and Intelligent Systems have decided to expand on that engine. A year later it released the new franchise titled Fire Emblem. This first game was a Japan-exclusive release. Nintendo, acting as the publisher of the series, decided to bring the franchise to NA, and it has been a huge hit. The Sacred Stones is the second Fire Emblem game to come here, and there's not much changed -- but why mess with something that is so great?

Fire Emblem and Advance Wars share the same style of gameplay that has been named turn-base strategy RPG. Quite a long name, but it holds true to every single word. If you've played Advance Wars you won't have a problem converting to the Fire Emblem play style because it is virtually the same. Players will find their characters on a large map. The map either will totally be in view or there could be a fog that covers the map up and you'll need to send scouts. With each battle there will be a different goal to be met. The majority of them will be to seize a building or defeat a boss. Different strategies come into play, such as character placement, which ones will be used, movement, etc. 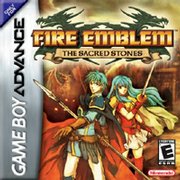 The two main characters are the royal children of Renais. Prince Ephraim and Princess Eirika find themselves as the last hope to restore peace. They have many allies of different classes that they start with and will meet on the way throughout their journey. You'll meet new people that can vary from 40 different classes. The variety in these classes is astounding as each one has different skills and attributes. They will also level up as they experience more battles. After certain requirements are met, they'll be able to gain a higher class. The instruction booklet contains a tree that does a superb job to show how classes are changed. A couple examples are a pegasus knight and a mage. The pegasus knight rides around on a pegasus, specializes in lances, and will eventually become a falcoknight. On the other hand, the mage uses magic and levels up to become either a sage or mage knight. Others are mercenaries, paladins, rangers, pirates, snipers, and much more.

The depth of character development and the choices you have are immensely fun to experiment with. It's been mentioned that you will meet many characters who will join your party, but there will be many you lose, too. The catch to so many characters is that if you ever lose someone in battle, they'll be forever gone. So don't get too attached to your characters because if they die you'll never be able to use them again, although you might find a character of the same class later in the story. There were plenty of times where I lost a favorite character and restarted the battle to not repeat the same mistake. You'll find yourself doing this a lot.

The support system is particularly enjoyable. This involves the characters in your party and their relationship with each other. Some characters will have known each other before and have history of friendship. These particular characters will develop a support relationship with each other. If these two characters find themselves by each other in battle, their attributes are slightly raised as long as they fight side by side. Not only does this help combat, but it also expands on the individual stories. To activate this support system, you'll need to have them converse in battle. In these conversations you'll get to know more about the characters and their past.

Combat is the main premise of the game and it is done to perfection. There are three main modes of attack: direct, indirect and long-range. Intelligent Systems has imposed a strategic triangle into the combat system. The weapon triangle concerns swords, axes and lances. Each weapon has a strength and weakness. Swords combat well against axes, axes against lances, and lances against swords. Magic has a similar system, but it deals with light, dark and anima. Players will want to create the best match-ups with their units. If there is a group of axe warriors on one side of the map and lancers on the other, then you'll want to send the right characters to fight the enemy. Terrain also comes into play as you'll be able to raise your defense if you are in trees, buildings, higher ground, etc. The depth of combat revolves around the environment and combat match-ups.

Before each battle begins you'll need to prep your units. First you need to decide which characters will participate. You don't want to get caught using the same characters over and over because you'll want to evenly level them all. Also, checking the map is crucial because certain classes will have an advantage depending on the scenario. You'll also be able to manage the items used by characters and check each characters support status.

Graphically the game is vibrant and full of colors, with great sprites as well. The best part of the looks is the combat animations. When you engage in battle, an animation of the units attacking each other comes up. Depending on what class, weapon or magic is being used, you'll get a unique animation. After time these animations slow gameplay down and you'll eventually want to turn them off. Cut scenes are presented with character cut-outs placed on different backgrounds. It's very simple but enjoyable to look at. The music is done with classic midi instrumentals and actually has some catchy melodies to it. I found the sounds of the combat animations to fit perfectly as well. There is nothing that will wow you in the sound department, but it fits contextually. This is a GBA game after all.

I have to admit that this game is not for everyone. Fire Emblem takes a great deal of patience and a large pre-battle thought process. There's no way one can be successful by winging it through battles. One thing that Intelligent Systems does is make the tutorial system very beginner friendly. The game will carefully take you through the early battles and all the aspects of it. To let you know how large the game is, I was still getting tutorial hints in chapter 8. So don't let the extensiveness of the game intimidate you because the game slowly lets you familiarize yourself with everything.

Obiously, Fire Emblem is truly vast. As virtual entertainment, Fire Emblem is a bullseye hit. The game does everything you would want from a video game: it has depth, strategic thinking, the story immerses you into the world and the characters are unique and just as deep as the gameplay. The attachments you grow with your characters and the emotions of seeing them succeed or fail represent how grand the game is. Easily one of the best GBA games to date.

now maybe it is just the screens placed on the review, but it really looks nothing like Advance Wars, and your description is definately more akin to that of Final Fantasy Tactics Advance, so my question to you is this: how does it fare compared to FFTA?

Haha. I hope there's some reference there to my response to your review. ^_^ Yes, it is a lot like FFTA, but Advance Wars is just like FFTA in a way as well. FFTA, Fire Emblem, and Advance Wars are pretty much the same except Advance Wars uses units instead of characters. They all have the same premise though. I compared Fire Emblem with Advance Wars because they were from the same developers, hence, it made more sense to compare them.

well, it is kinda a reference to your comment. but mainly i am looking for a title to supplement FFTA this summer. i love ffta, but it gets old quickly when you aren't gaining much xp anymore.

This would be a good choice. Probably not as long as FFTA but still good.

One question, is it true that this game is a little too easy?

This game? Too easy!? I think NOT! I'm playing this game right now for the third time, but this time I decided to take it up a notch into "Normal Mode." It's not really easy, Mun, trust me... I took me all yesterday and this morning to finally get this girl Marisa without either killing her or letting her kill one of MY characters! If you are thinking this is an easy game, try playing it, even in Normal Mode(!), and you'll see the difference!