Vans Warped on the road again

The Vans Warped tour has become a venerable traveling punk rock circus as it heads into its 11th year, with a lineup of more than 85 bands on six stages that includes The Offspring, Fall Out Boy and even the veteran punk rocker Billy Idol on select dates.

"Warped Tour has built steadily over the years to become a well-established franchise that not only breaks new bands, but the artists like playing it," said Gary Bongiovanni, editor-in-chief of the trade publication Pollstar.

"They're not doing it for the money. How else could you put 40, 50 bands out on the road and still have particularly reasonable ticket prices?"

Warped Tour founder Kevin Lyman says despite the massive bill, selecting the bands that will take part in the show is a carefully thought-out process. 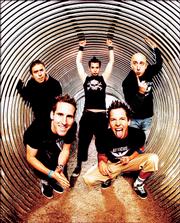 Simple Plan is among the more than 85 bands that are playing on the Vans Warped tour. The tour is scheduled to stop June 22 in Bonner Springs.

"We tried to stay with the roots, the legacy of it; like No Use For A Name, they were on the first tour in 1995. (So) there's little bit of the old school," said Lyman. "And you try to see what the new bands are doing, like My Chemical Romance."

MxPx's bassist/vocalist Mike Herrera's band has played Warped Tour four times over the years. He said of the festival: "It's a good way to get out there and have fans see you who don't normally go to your shows."

And the tour isn't just geared toward kids: Lyman sometimes spots a parent or two milling about the crowd with the teenagers.

It's not just parents bonding with kids at the Vans Warped tour - bands form connections with other groups too, taking part in post-show traditions like the backstage BBQ; Herrera and the rest of MxPx fondly recall the first time they participated in the other well-known Warped Tour tradition, where bands invite members of other groups to come up and play with them.

Still, bands on the bill seem to revel in the tour's unpredictability and energy.

"Warped Tour is like a traveling circus. Its a caravan of artists and creative people," said Cufi of the Atlanta-base rock-rap group El Pus. "You work for a half-hour, the rest of the day you're in the middle of a festival; you get to meet cool people."