British export Kasabian gets 'honest about the world'

By By Gary Meenaghan - Special to the Journal-World

Pregnant isn't a word one often uses to describe the current state of a rock band. It is perhaps fitting, though, when it comes to England's latest export, Kasabian. The name derives from Charles Manson's expecting getaway driver, Linda Kasabian. Yet that's not the reason lead singer Tom Meighan declares, "We're pregnant!"

Meighan is actually discussing the development of the band's sophomore album.

"We've got our second baby, and it's vicious," says Meighan in a phone interview from Philadelphia. "The first one was a little boy; this one's a little girl. And she's very vicious."

Ominous news to anyone who has heard the little boy's screams.

Kasabian's eponymous debut was released last year and has taken the British music industry by storm, deservedly earning the band three Brit Award nominations, including the prestigious Best British Group. Despite the record only being released in the United States in March 2005, Meighan, along with vocalist/guitarist Sergio Pizzorno, lead guitarist Christopher Karloff and bassist Chris Edwards, were among the most anticipated performers at this year's Coachella Music and Arts Festival in Indio, Calif. The electro-rock outfit has even managed to secure a support slot alongside Australian rockers Jet on Oasis' U.S. tour this fall.

"It's going to be total (expletive) carnage," Meighan says. "We grew up in the Brit-pop era. We grew up with Oasis and Blur and Supergrass and Radiohead and all these wonderful British bands. Just to be playing with our heroes is wonderful."

Kasabian is often compared to its heroes, as well as other Brit-pop groups like Primal Scream and The Stone Roses. All of which is fine by Meighan, especially the latter, because, "They use electronics with rock the same as what we wanted to do." 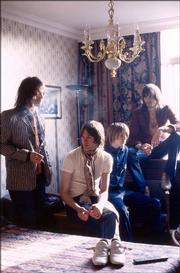 Jill Furmanovsky/Special to the Journal-World

While its predecessors had trouble finding their feet in America, Kasabian is well on its way. Its first single, "L.S.F. (Lost Souls Forever)," is featured on Playstation's FIFA Soccer 2004 and several tracks have appeared on television shows including "Desperate Housewives" and "The O.C." - not that Meighan takes much interest.

"I'm sitting down on my bed relaxing and 'The O.C.' is on, which I never watch anyway because it's (expletive). I'm not a fan of it. Trust me," says Meighan before going on to explain that when he heard the beginning of a familiar song he was quite astonished: Nobody had told him the music was being used.

"If they want to do it, do it man," he says. "It gets our music out to everybody. I just find it amusing when I see it on things like that."

Meighan's amusement is hardly surprising. The album's cover is more reminiscent of a modern day Che Guevera portrait than a sunny afternoon in Orange County. The plain, black-and-white headshot, half-covered by a neck-scarf, oozes subliminal hints of rebellion, rioting and revolution.

The epitome of this subject matter is the emphatic "Reason Is Treason," a song that includes the sinister lyrics: "See the stones coming at my window / See they left me no protection / Tell his family that he won't be OK / K.I.L.L."

Another ferocious anthem that terrorizes the senses is "Club Foot," powered by a frighteningly dark yet infectious guitar riff.

Meighan says, "When we play that, you just see the whole crowd go off. Everyone just seems fired up after we leave the stage. We leave them in (expletive) ruins. We're calming down, and they're going (expletive) hyper!"

But Meighan and his bandmates aren't trying to start a revolution, he says: "We just want to make good music and that. I think it's just being honest about the world."