Gamer's Hell would be more accurate

The only non-generic part of the game is the story. Your enemies are called Kewletts, and they're sickly-sweet little creatures from Kewtopia. The princess of Kewtopia decides that any non-cute creatures need to be destroyed, and sends her minions of Kewletts out to do her bidding. Fascism is a weirdly omnipresent theme in the game, and there are posters everywhere that look like alternate universe WWII-style propaganda ("Stand Tall. Stand Proud. Stand CUTE!"). There is a doctor character for the Kewletts, and I could have sworn I heard other characters refer to him as "Dr. Mengele." If that is the case, and he's named after the infamous Nazi doctor, then that propels this game into an entirely new stratosphere of weird/disturbing.

You play as Raze, a beast who gains power from an ancient artifact he stumbles upon. Raze leads the "ugly" movement against the Kewletts, and he's got a variety of weapons to help him. These weapons are acquired through "squib trees" that are spread across the huge levels. Many different squib types are available, and they range from the standard machine-gun style to sniper squibs to remote explosives. In addition, Raze can perform stealth kills, but this portion of the game is woefully underdeveloped. Pressing X will put Raze into stealth mode, and it encourages you to sneak up on Kewletts and hit L to finish them off. Unfortunately, the AI is atrocious, allowing you to run around loudly behind enemies without them even realizing you're there. 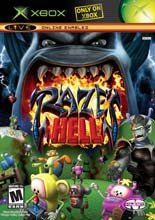 Environments are absolutely huge in the game, but they're all uninspired and generic. Thankfully, navigating them isn't a time-consuming chore, as Samus ... I mean Raze ... can compact into a ball and roll quickly across the terrain. This mode of transportation can also be helpful in battle situations, causing Kewletts to splat against the screen leaving a bloody streak.

It's important to note that this game is insanely hard, to the point of certain frustration. Enemies can entirely overwhelm Raze, and it becomes nearly impossible to survive certain portions of the game without dying way too many times. After killing an enemy, holding L3 will suck in the guts of your dismembered foe, recharging your health a bit. This certainly helps, but it can be extremely hard to gather the health without being shot enough times to negate its benefits.

Mission objectives are pretty standard action game fare (free the prisoner, blow up the generator, etc), and they're clearly just there as an excuse to run around shooting cute things. There is an objective map that can be brought up with the Back button, but no radar that indicates where enemies are. This becomes very annoying when you're being shot at for five minutes without a clue of where it's coming from.

Absolutely no aspect of the game is particularly impressive. Graphics are extremely bland and uninteresting, and the sound effects sound like they came off a "101 Action Sounds!" CD. There are several mini-games to tinker with, including soccer and golf. I wouldn't even go as far as to call them pleasant distractions, as they seem to just be included to mask the fact that there's simply not much to do in this game. Co-op is available at any time by pressing Start on the second controller, but it serves only to subject another person to the boredom of Raze's Hell. It's truly a yawn-inducing, repetitive gameplay experience that felt more like an exercise in apathy.

This game Rocks! Your review is gay... ...and so is this piss-lame-milfing website.

Thanks for your intelligent contribution to our growing and fruitful response section! I look forward to your cutting-edge insight in future posts!

I'm not even sure that hyphenated series of words makes sense, Frederick.