A touchin' and a Simmin'

Good: Addicting and lots of customization

Bad: Is the new change in the series good or bad?

Will Wright has been deemed one of the greatest contributors to the video game industry. He's a co-founder of Maxis and was the original mind behind games like SimCity, SimEarth, and of course The Sims. After many, many expansions and one mediocre online title, The Sims series has moved on to Roman numeral two. The DS actually gets its own original game that is separate and different than the console counterparts.

The Sims use to be an all controlling game. You were able to create as many characters as you wanted, control all of them, and have them all interact within your neighborhood or if you were lucky enough to have the expansions, you could go on dates, vacations, or party in the night life. In Sims 2 the gameplay has changed to a more linear, story-driven game. You're still able to customize your character from how he/she looks to what they wear. From there you'll start your adventure in Strangeville. You'll eventually inherit the position of hotel manager and it is here where you make money, add on fun rooms for you to interact in, and socialize with people of the town. Just like most Sims, the game never ends and you'll be running your hotel throughout the adventure. However, this is just the core gameplay element. You'll still be able to go out dancing, buying new furniture, kill alien invaders for money, and search the neighboring desert for objects and money. The game is clearly not as open-ended as The Sims, but this isn't necessarily a bad thing as now the game points you in the right direction of how to complete the basic need of the game: make money. 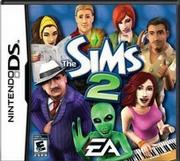 I found interacting with people to be a little confusing and frustrating. Every time you interact with someone it could be to cheer them up, impress, or romanticize with them. You'll be given three choices of how to interact depending on what you're doing. So if you are impressing someone, your choices of interaction will be to dance, laugh, or high-five. You'll need to pick one of the interactions and if you pick wrong your sanity meter (health meter) goes down drastically. It's annoying because you'll only be able to mess up three or four times before you'll need to recharge your sanity. You can do this by sleeping, using the bathroom, or eating. After each interaction I ended up having to go refill my sanity meter and it seems a bit unrealistic taking a shower 5 times within an hour. I'd say that the sequel is a lot less forgiving than the original. Another change to the core gameplay is that the game's clock runs in real-time now with your DS's internal clock. The point of this was to add realism but it does lead to some annoyance because if you build a new room, it will literally take 8 hours in real time for it be finished. Unlike the first game, you could speed up time and allow things to progress faster. That feature is left out of Sims 2 and there are pros and cons to it, but it just comes down to personal preference. It's obvious though that Maxis wanted this to be as realistic as it can get.

The games interface is very well laid out as the bottom screen is used for the stylus to navigate the menu and the top screen contains the action going on. The problem with the controls is that as you walk around, you'll need to rotate the camera with the shoulder buttons because the camera does not stay behind your character. Instead is stays stationary so if you don't rotate it, you won't be able to see where you are going sometimes. Getting to the problem, since the menu requires the touch screen, you'll need to keep the pen in your hand as you hold the system so that you can access the shoulder buttons. It's uncomfortable and after playing for an hour or so, your hand can start to cramp. I found in easier to just set the pen down and pick it up whenever I needed to use it. It's a bit unrefined but in the end it works out and you get use to it.

The Sims 2 features a full 3-D environment with poor details and texturing, but in hindsight this is the DS we're talking about and not some powerhouse portable. The game is not about graphics either so it's not a big deal. I was actually just happy to see a game that is fully 3-D on the DS and that it was executed very well. The music featured in the game had some catchy tunes. I actually found myself playing with the jukebox a lot. It's interesting because Maxis decided to go with modern, electronic beats that seem like they should be in an elevator. The music fits nicely and never gets on your nerves, which is a big factor in playing a game that requires such longevity.

The Sims 2 is just as fun as the original Sims, but not as open-ended. I personally believe the open-ended style of the original The Sims worked better, but that doesn't mean I didn't have a blast playing with the new one. It's still as addictive and I'm sure anyone who is a fan of the series will still have just as much fun as I did. Don't forget that The Sims 2 could be the ideal handheld game since you can pick it up wherever and whenever to complete tasks and make more money. In the end, the randomness of interacting with the townspeople and the clunky controls bring the game down.