It's been a quarter of a century since Henry Rollins began touring the world, and he's amassed quite a few stories.

What initially began as tales from his days fronting the seminal punk act Black Flag have grown in scope as the diversity of Rollins' career has expanded.

So now the 44-year-old rock iconoclast is hitting the road with a spoken-word show titled "25 Years of Bullshit" that promises to indulge audiences with his punchy commentary on politics, pop culture and all things Henry. He'll not only relate some of his favorite anecdotes from the last few decades, but he'll work in new material about his recent USO tours, his forays into Hollywood and his new TV series, "Henry's Film Corner."

Whatever the topic, the Grammy-winning performer can never be accused of being dull.

He says, "I like confrontation, and I love conflict because I know I'm right."

Q: So much communication is focused on e-mail and the Internet. Is the spoken word a dying art?

A: Not at my shows. It's a genre I don't know much about. I'd never heard that phrase until a couple decades ago when I would do these talking show, "Oh, you do spoken word?" I'm like, "I hope not." Because it sounds like something I'd never go to. But my gigs are alive and well. I don't know how the rest of the chickens in the roost are doing. 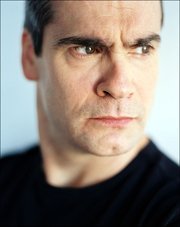 Alison Dyer/Special to the Journal-World

Q: Who is the modern master of bulls**t?

A: George W. Bush and Dick Cheney. They lied to a nation. They sent good American boys and girls into a war that blows them up every day for - well, the reasons keep changing as the situation worsens. So I think they are the masters of bullshit.

Q: When you're on a USO tour, how do audiences react to material that might be anti-Bush?

A: Well, it's not like I ever get on the topic. Like they say, "Don't discuss politics or religion in a submarine." When you're out in Afghanistan or Iraq or Kuwait, you instinctively leave things alone. These guys and girls got their boots on the ground, and they're getting shot at every day. They're in a high-threat condition. It's really not on to talk about anything that you approach as a pundit or some guy who watches it on TV to someone who is actually on the ground doing it. While I may disagree with deployment of American forces in Iraq, I don't disagree with the soldiers. My beef is not with them. My beef is with the people who put them there. Because no one has made the case for Iraq to me yet. No one has played the right tune where I go, "I'll dance to that one."

Q: Since you tour so much, do most cities end up looking the same? Or do you develop your own connection to different places?

A: I develop quite a connection to a lot of cities. And I really look forward to getting to them, because there's a restaurant I like or a bookstore or a record store. Like in Lawrence, the venue I always do is right on that main drag. I immediately hop out of the bus and hit that stretch. There's that great record store where you go upstairs and there's a lot of vinyl. I never not go in that place. I really look forward to stuff like that.

Q: You've certainly had run-ins with audiences over the years during your concert performances. Do you have many during your spoken-word shows?

A: No. Most people who go there are fans. Every once in a while you'll talk about Bush and some guy will go, "Hey, fuck you." So fuck me. It's not as if anybody who says they don't like me or disagrees with me is any kind of deterrent. That's like winning the lottery. That's a free bowl of soup for me. If someone doesn't like that I have a problem with the president, I can't tell you how giddy with delight that makes me. How I love to put the sand on the ground and draw a line through it and go, "I'm over here."

Q: When is the last time someone threw a punch at you?

A: A guy in Australia a few months ago started a thing during the show. He was outside after the show. I took care of it. It's not always easy to put them down, but it's easy to get into it. I've gotten in fights in Australia quite a few times. 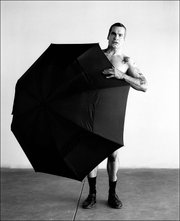 Alison Dyer/Special to the Journal-World

Q: Your bio on the Internet Movie Database claims you "despise the music of Depeche Mode, U2 and Bruce Springsteen." Any more spring to mind?

A: I have no problem with Bruce Springsteen. I wrote a piece in Spin magazine 20 years ago when I said the Boss' outfit - blue jeans, red handkerchief, white T-shirt and big biceps - made him look like a very stocky gay boy. What's up with that? But no, I actually have most of Springsteen's albums. Depeche Mode? I used to talk about them on MTV and I'd say, "You mess with Depeche Mode, you mess with me." It was just a joke. I have nothing against Depeche Mode. U2 on the other hand, I just think are hilarious. Hack drummer, hack bass player, one-note guitar player and then there's the singer. It's basically music for people who've lost the will to fight.

Q: Where do you keep your Grammy?

A: I gave it away. I didn't want it. I don't want any trophies for art. I gave it to a friend of mine who had a fireplace. I said, "That Grammy will look really good on your mantelpiece." I saw it there a few months ago and it's all tarnished because it's not been touched for like nine or 10 years, whenever I got it. That stuff means nothing to me. It's nice that your peers - if that's what they are - or other entertainment types voted for you. Back then I got a nice fax from Rob Halford of Judas Priest that said, "I'm voting for you, man." I kept the fax but didn't keep the Grammy. I'm way more into a fax from Rob Halford than this thing they hand out to Sheryl Crow.

Q: If you win another one, can I have it?

A: Sure. But I'll never win another Grammy again. Every once in awhile in any industry, there's a hiccup. There's a weird hole in the tapestry and the peasants flood in. That was the year the band got nominated for a Grammy for the song "Liar" - our MTV moment - and I got nominated for that spoken word. We lost the music one to Soundgarden. No problem, because they're a great band. The other one, I guess it was more interesting than Ken Burns' "Baseball" on tape or Gregory Peck reading the Bible.

A: For me, I'm 44, almost 45, what I've liked about my 40s that I wasn't getting out of my 30s was you really come to figure out what you like and don't like. You don't have to put on appearances and do what you don't like so people go, "Oh, he showed up." You just don't show up. If someone doesn't like you, they can bite you. You realize you are now at the halfway point and the other half is going to be ever-waning resources. Your hair isn't going to get any thicker. Your knees aren't going to be more flexible and less pain-free. So now it's all about what you do for yourself. You want to take that trip? You better take it now because in 10 years it's going to be hard to get up off your (butt). You feel a sense of urgency, but you have the perspective and knowledge of 40 years of living to do that.