Bad: It will be overlooked by many for its E10 rating

Second game this month: Where farting is a weapon

Okay, I'll be honest. When Shrek SuperSlam rolled in to the office, I gave that sigh that I give when I am anticipating another throw-away title based on a decent movie license. I mean, the last licensed brawler was Marvel Nemesis and:well you know how that went. But fortunately, it's hard not to be pleasantly surprised by Shrek's latest gaming endeavor.

Maybe it's the hilarious cutscenes that are on par with the Shrek trademark humor or the great animations or the surprise that the combat differs for each character and goes deeper than I'd expect, but Shrek SuperSlam is an ogre's worth of fun.

The title features full 3D environments, much of which is destructible. 20 of Shrek's most popular characters including Donkey, Puss-in-Boots, Princess Fiona, and Prince Charming are included. You can battle it out in the entertaining Story mode or play through Mega Challenge or engage in a four player brawl in Melee mode. And yes, Melee mode is an interesting allusion to the similar Super Smash Bros. Melee. 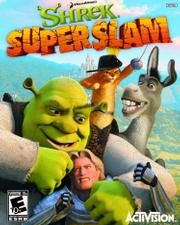 At first, using different combinations of two buttons can let you pull off core combos. But then, the specific damage they deliver can be combined with throws, blocks, air attacks, charges cancellations and various items you pick up around the stages to make the combat system easy to learn but engagingly deep for a mere brawler. No, this isn't the answer to Virtua Fighter, but it's a long way from Celebrity Deathmatch.

Each fighter not only has specific combos, but also specific special moves and SLAM rages once the SLAM meter is full. There are many weapons, potions, magical items and wands you can also use that make opponents more vulnerable, breathe fire, throw grenades and so on. The range of options is more than expected and each feature has a distinct use.

Both young and experienced gamers are going to get a good five or so hours out of this before diving into multiplayer where the game hits its true stride. Yeah, it's really short and isn't the most sophisticated fighter out there, but man it's a refreshing entry into the mindless-yet-sorta-deep brawler genre. You can pick it up for a half hour at a time to button mash or put forth some sort of strategy and leave satisfied.

The graphics are slick, shiny, colorful and the load times are kept to a minimum. The whole graphics package bleeds Shrek atmosphere. It would be difficult not to be sucked into the lighthearted mood.

The sound effects and try-to-be-like-the-real-actor voiceovers are done surprisingly well. The music is fanciful and free, but what is wrong with the announcer's voice? It sounds like it was sampled on a tiny voice recorder.

Shrek SuperSlam isn't trying to be anything more than the lighthearted escape from life that it is. The controls are tight and there is enough depth and varied action to keep anyone from ten to 110 entertained for a significant amount of time. Trust me when I tell you that it's not another sorry excuse to cash in on a great movie license.