Even months later, RE4 proves its timelessness

When Resident Evil 4 was announced for the Playstation 2, it was met with heavy skepticism from many gamers. Message boards were filled with posts such as "The graphics are going to be awful compared to the Cube version" and "Load times are gonna ruin the experience". Thankfully, Capcom has released a stellar port of one of the best games of all time, and even features some new content exclusive for the Playstation 2.

For the unfortunate gamers who have yet to experience RE4, you must pick this game up immediately. The concept is simple enough (even borderline cliche) ex-cop and current government agent Leon Kennedy is sent into rural Spain to rescue the President's daughter. She has been kidnapped by a radical religious cult, and they clearly have devious intentions. When Leon arrives in the village where she is supposedly being held, it becomes quickly apparent that something is very wrong with the locals. Large numbers of farm tool-wielding villagers are obviously very perturbed at the outsider, and immediately assault Leon with everything they can find. 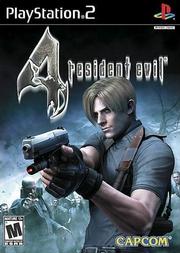 Resident Evil 4 wastes no time in throwing the player right into the action. The main village area at the very beginning of the game is instantly challenging and extremely intense. Pitchforks, axes, and a chainsaw-wielding maniac are just a few of the dangers you'll encounter in the first 15 minutes. Amazingly, this intensity and edge-of-your-seat gameplay does not let up at any point throughout the nearly 20-hour quest. In fact, it constantly introduces new gameplay mechanics, innovative boss fights, and a slew of new weapons and enemies as you progress.

Level design is immaculate, and each area feels like it's truly unique, realistic, and alive. Considering so many modern games feature uninspired corridors and boring environments, RE4 is a breath of fresh air in so many ways. Attention to detail is everywhere in this title. Enemy projectiles can be shot out of the air (including arrows and rockets), chickens will lay eggs that give you health, and birds flying in the sky will fall if a flash grenade is thrown. I can't count how many times some small detail in the game impressed me.

Leon starts out with a standard pistol, and acquires a shotgun early on. Throughout the course of the game, you can purchase various pistols, a Butterfly Magnum, a rifle, and several other weapons (including the PS2-exclusive laser cannon). Each weapon is appropriate for certain situations, and deciding which to use is crucial for survival. If one enemy is slowly approaching you, he can easily be taken out with a pistol. Closely-grouped clusters of enemies are great fodder for the shotgun or grenades. If you have enough room between you and the enemy, the semi-auto rifle is great for performing extremely satisfying headshots. Almost all of the weapons can be upgraded in specific aspects, such as Firepower, Reload Speed, and Capacity. In addition to the standard weapons, there are some crazily-powered secret guns that are unlockable after beating the game (or some of the various mini-games). For example, one of these (the Chicago Typewriter) is a tommy gun with infinite ammo that shoots bullets almost as powerful as Magnum shots. After defeating a game as intense and difficult as RE4, it's certainly fun to go through again and simply mow through these previously challenging enemies with the super weapons.

Boss fights are truly epic, and almost all of them feature several different ways to go approach the situation. For example, one giant boss has a weak spot that protrudes out of his back. Leon can either safely snipe from a distance, or jump up onto his back and slash at the spot by jamming on the X button. Some of these creatures are genuinely gigantic, and the fact that the PS2 handles them with virtually no slowdown or graphical hiccups is truly impressive.

The Gamecube version of RE4 was a graphical masterpiece, and this port is no different. In fact, it looks almost identical to the original. Enemies are animated beautifully, and particle effects, explosion, and fire all look amazing. Sound effects and music are also perfectly done, and seriously add to the sense of terror. It's almost impossible to relax if the ominous music indicates that enemies are still present in the area.

New to the Playstation 2 version is the "Separate Ways" sidestory. In this, you play the same story as the original game, although from Ada Wong's point of view. Not much more is revealed in terms of the story, but it's still refreshing to see some new objectives introduced. There are some brand-new areas and a couple exclusive boss fights near the end of this mode, as well. While it may be relatively short (around three hours), it's certainly a welcome bonus. The Mercenaries minigame and Assignment Ada are back as well, so there is a serious amount of gameplay to be found in this title.

I fully expected Resident Evil 4 on PS2 to be inferior to the Gamecube version. Surprisingly, load times are very inobtrusive, and the graphics are still breathtaking. If you haven't played this game yet because you only own a PS2, you absolutely must purchase it immediately. It's easily the Game of the Year so far in my opinion, and ranks among the very best videogames ever made.