Not really related to: Battlefield 2 for PC

Every previous Battlefield game has been ultimately focused on the multiplayer landscape. From 1942 to Vietnam to modern day war, the PC crowd has gobbled up the franchise in mass quantities. It's noteworthy that the first incarnation on a console packs the first single player campaign that's not only worth mentioning, but proves to pack in a lot of fun.

Being able to see the main storyline unfold from the opposing sides of the U.S. and China is a great idea. You are presented with specific spins on who is at fault for what, giving a sort of wayward attachment to both sides as you progress through the many missions.

BF2MC doesn't get caught up in an endless amount of tactical commands or strategies, but gives the illusion of such depth really well. Gunplay is solid and engaging and the objectives are laid out really well over sprawling terrain and urban areas. But what really provides a tremendous amount of strategical depth is the "hot swap" feature. 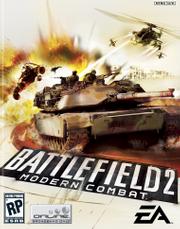 Want your team to do specific things? No problem. Simply aim your reticule at the person you want to command and with a press of a button, that soldier is now you. Hot swapping allows you to control anyone of your team at any time. Is your sniper not taking care of enemies like you want? Be him. Is your tank gunner sucking it up? Be him. Not only is the hot swap feature a total thrill, but it makes you feel in much better command of your team versus simply giving general command to NPCs with your D-pad.

None of this would make much difference if the controls were worthless. Fortunately, the control is tight, the bullets and splash damages all feel generally effective and the game runs smoothly. There are five classes of soldiers to choose from all outfitted with a different weapon combo. Choosing who you start out with is less consequential in the single player arena given the hot swap feature, but you're never left with the feeling of not having a variety of firepower at your disposal.

One thing that may be confusing for some is that given its name, it will draw inevitable comparisons to PC's Battlefield 2, when in reality, it's pretty different. I'm sure if they just left the two off, it would still get all the hype and sell-through EA intended.

Regardless, any Battlefield game revolves around the multiplayer mode. This is where BF2MC falls a little flat. There are only Conquest and CTF modes which share a lot of similarities. In one mode you have to take care of several flags and hold them whereas in regular CTF, you just acquire and retrieve one enemy flag.

Online, the PS2 version really suffers from a lot of lag. Sometimes games won't even complete; they'll just crash out. The Xbox version is a different story, lagging only every now and then, but delivers an enjoyable experience. The tracked stats on EA's website is pretty impressive though. I wouldn't be surprised if this captures the #2 or #3 spot on the Xbox Live charts after a few weeks because of its pick up and play accessibility. 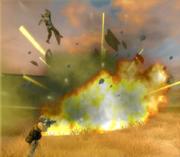 Graphically, the game is nothing to speak of. It looks like an early generation PS2 game on both consoles. Certainly when you stack it against its PC cousin, it looks extremely outdated. The sound doesn't scream cutting-edge, either. All sound effects seemed ripped from the current modern war sound bank, with nothing standing out besides the pretty decent voice acting in the campaign mode.

Modern Combat starts out really well and despite the half-full showing on the multiplayer side, it delivers a solid console shooter experience in the end. The single player missions are definitely worth the price of admission and what's there on the multiplayer side will give you further incentive to keep it rotating in the disc tray.