A hybrid of: Mario Kart and Twisted Metal

Ever since Mario Kart, gamers have been bombarded with racing games featuring established characters and franchises. Obviously, none have reached the huge success and acclaim of the Nintendo series. Sonic, Crash Bandicoot, Shrek, and Antz all tried their hand at racing games, yet none of them had the charm of Mario Kart. Jak X Combat Racing tries a slightly different approach by focusing on several different modes rather than simple circuit races. It works, and is easily the best of the impersonators.

Adventure mode (the primary single-player option) actually attempts to present a story, and it's surprisingly not that bad considering that it's a racing game. Jak and company meet up for the will reading of the recently deceased Krew. After they all drink wine to toast his death, a video of Krew explains that they've all just ingested a slow-acting poison that will eventually kill them. You see, it's the lifelong ambition of Krew to win a racing championship, and he's going to use the poison's antidote as incentive for the group to win. If they get first place, they get the antidote. If not, they die. It's a lot more believable and interesting than "Well, I guess when he's not kidnapping Peach, Bowser pals up with her and Mario to race go-karts". 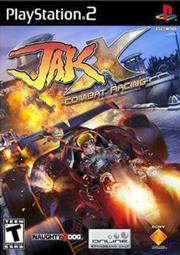 The best thing Jak X does is avoid repetition. There are lots of different gameplay modes, and the majority of them are very fun (both in single and multiplayer). Circuit Race is racing the old-fashioned way, and you obviously win by finishing in 1st. The other modes, however, have different objectives. Deathmatch is exactly like Twisted Metal, and it places you in an arena with a bunch of weapons and enemies.

Death Race features continuously spawning drone cars in front of your vehicle, and you must destroy a certain amount of them to get the Gold Medal. Some of these require you to destroy over 300 in a single race, so there's a whole lot of shooting going on. In Freeze Rally, you have to finish the race in under a set amount of time. Scattered throughout the course are special Freeze icons that will stop the clock for a set amount of time (either 2, 5, or 10 seconds).

Sport Hunt is a contest to see which car can destroy the most of a specific moving target. It's a lot of fun (especially online) to madly drive around a huge arena shooting missiles at as many dinosaurs as you can. Artifact Hunt is fairly simple, and you win by collecting more artifacts than everyone else. All of the aforementioned modes are great, and Capture the Flag is possibly the best. Playing CTF 3-on-3 online is fast-paced and genuinely fun. The only truly mediocre mode is Turbo Dash, which you win by collecting a bunch of objects and 'charging' them up for some reason. This mode takes place on the circuit tracks (rather than the arenas), and it's awkward to race and charge these items at the same time.

Various weapons and copious amounts of Turbo are all over the courses. All pick-ups are referred to as "Eco", and there are yellow, blue, green, and red varieties. Yellow Eco is your standard weapons the missiles, grenades, homing balls of electric death, etc. Blue Eco is turbo, which is activated by holding R2 or double-tapping X. Green is health, and Red are weapons that shoot out of the rear of your vehicle. A nice additional use of the Red Eco is deflecting incoming missiles. You'll see a reticule closing in on your car when a missile is approaching, and pressing L1 will deflect it if you have a Red Eco weapon. Unfortunately, Jak X features a very annoying rubber-band A.I. system that becomes a huge nuisance in the more difficult races and grand-prix circuits.

Between races, you can upgrade multiple aspects of your car's performance and appearance. As you win more and more races, you'll start unlocking new hoods, wheels, and other parts for your vehicle. At the end of each race, you're awarded Orbs that can be used to buy stat points for categories like Top Speed, Acceleration, Armor, and Turbo capacity. Unfortunately, there's no real way to tinker with the actual handling of the car, and powersliding is pretty awkward to control.

Graphics are great, and particle effects are all over the course. The tracks all feature a good amount of visual flair that fits the game well. Cutscenes are well-written and worth watching, certainly far more than story elements of similar racing games. In the beginning cutscenes, there are a couple songs by the Queens of the Stone Age that fit the game perfectly. Unfortunately, these songs aren't heavily featured in actual races. Most tracks feature similar hard-rock riffs that end up working just fine for the game.

Jak X has a deep and lengthy single-player mode (four different large Cups), and features some great online multiplayer modes. Replay value is pretty high with this title thanks to the varied gameplay modes. Fans of the Jak and Daxter universe or arcade racing fans in general owe it to themselves to give Combat Racing a shot.