Caught in a 'Funk'

Steve Ducey, left, and Troy Hirsch run through a scene from "The Big Funk." E.M.U. Theatre will stage the play, a commentary on the ills of modern living, this weekend at the Lawrence Arts Center, 940 N.H.

A play that gives social commentary on the ills of modern living may not sound particularly captivating. But one by John Patrick Shanley, writer of "Joe Versus the Volcano" and "Moonstruck," stands a good chance of being entertaining.

Presented by E.M.U. Theatre and a cast of quirky characters who, according to director Laura Leffler-McCabe, are "realistic but find themselves in unrealistic situations," Shanley's "The Big Funk" is more Greek drama than tedious lecture.

E.M.U., an independent theater company, has been performing plays by local and professional playwrights for nine years. Cast member Steve Ducey, who plays Austin, the self-proclaimed hero of the play, says independent theaters are much better vehicles for pieces like Shanley's.

"It's edgy and idea-driven," he says, "and an independent theater is much more apt to do a play like this since we aren't a profit-motivated enterprise. We just want to fill seats."

The title of the play makes reference to the time period when it was written. 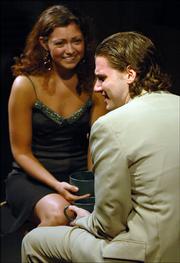 Elisabeth Ahrens, left, and Jason Bradbury rehearse a scene from "The Big Funk" at the Lawrence Arts Center.

"In 1991 we were just coming out of the Gulf War," Ducey says. "There was a general malaise about yuppie, mall culture. People felt like the soul, the passion of life was being ground away. It's the same today with the current situation. People generally have a feeling that we lack spirituality and a sense of community."

The absence of communication and general "niceness" of people is one of the main themes of the play. The first act sets up the five central characters, pairing them off into scenes that demonstrate the funk in which Americans find themselves. The second act is done in Greek theater symposium style. Each character represents a problem in society, and the others bump ideas off of one another, trying to find solutions.

"Really I think it's about how you have to notice what's happening in your life," Leffler-McCabe says. "If you pay attention, you can see it. It's about being kind and listening to other members of the community to get out of the 'funk' we find ourselves in."

The play is intended only for mature audiences due to some nudity, which is, according to Leffler-McCabe and the nature of the play, "not sexually provocative, but intellectually provocative."