By By Becca Ramspott - Special to the Journal-World

In classical Indian music, rhythm and melody are the driving forces of creation, and as a result, listening to it can feel a lot like being in a river. The percussion bounces off the other flowing instrumental sounds, much like sunlight glimmers off rushing water. And the melodies weave and curve unexpectedly among the instruments, carrying the listener like currents to moments of deep contemplation and reflection.

The beauty and transcendence of such a journey were in full effect Wednesday night at the Lied Center, when one of the world's most renowned musicians and composers, Ravi Shankar, and his daughter Anoushka Shankar shared the stage with 10 other talented performers in "Festival of India III."

The first half of the performance featured Ravi Shankar's composition, "Festival of India III," conducted by Anoushka, who asserted her own presence as a remarkable performer while directing a diverse ensemble of some of India's most accomplished artists with warmth and grace. "Sandhya Raga," was a particularly powerful part of the first half of the show, with individual solos highlighting the emotional undertones of each instrument - isolated moments of eloquence that were eventually woven seamlessly back into a rich, collective layer of sound. These instances underscored the strong feelings of respect and goodwill shared by the musicians, who closed their eyes and really listened to one another, enjoying each other's performances while keeping rhythm with their hands. Anoushka also frequently smiled and called out softly to her fellow players, infusing moments with strong solidarity and positive energy. 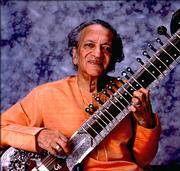 After a generous intermission, Ravi Shankar joined his daughter onstage for an unforgettable, improvisational conversation between his sitar and hers. Shankar, who is 85 years old, has lost none of his dexterity and remarkable skill; his hands flew up and down the sitar as if it were an extension of his body, pulling wandering melodies out of thin air like shooting stars. Anoushka enhanced his sounds and added her own in a beautiful and moving duet between father and daughter.

Equally moving was the fact that this was a also an exchange between two very accomplished, autonomous artists; Anoushka certainly carries her own talent and name after years of training with Ravi and winning various individual honors and awards.

The musicians who accompanied the pair also shared this dynamic creative energy. Tanmoy Bose's talent as a percussionist is perhaps exceeded by the passion he brings to his music. His quick and intuitive drumming flowed through his entire body, with his shoulders rolling and an easy smile on his face. He brought his rhythms to the rest of the music like an embrace. The rise and fall of Ravichandra Kulur's flute and Neyveli S. Radhakrishna's violin were also quite poignant.

All in all, it was an evening that carried listeners to an ocean of understanding and universal good - and to a deeper appreciation of classical Indian music.

- Becca Ramspott is a freelance arts writer living in Lawrence. She can be reached at bramspott@sunflower.com.