It certainly aged well, but has the same wrinkles

Good: More to see and do, core gameplay returns

Bad: Predecessors' problems have not been addressed

I'm a long time fan of the Age of Empires Series. How many hours I spent sneaking into the University computer labs after dark with friends to quickly install and play a networked round of the original, I can't really remember, but those were good old days. Age III certainly hearkens back to these days with a much more feature rich version of an RTS favorite. Six years have come and gone without a new Empires game and this much lauded third edition has some large shoes to fill.

Everything that you'd expect from an Age of Empires game is here: a long interconnected story mode, an old fashioned "skirmish" mode, a map editor, a network game mode, plus the ESOnline system for connecting you with other players over the net. There is also a worthy tutorial for newcomers to the series and a "civilopedia" of sorts through which you can learn anything you'd want to know about every detail of the game. Nothing is really missing here. 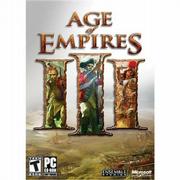 In this Age, the game begins about a hundred years later than Age of Kings (which starts a few hundred years later than the 1st) in the age of gunpowder where castles are mostly a thing of the past. This change is relatively well received, set in the "new world" of North & South America. The different nation's or "empires" that you will be playing as are pretty accurate of the historic European colonial powers of the time (Russians, French, English, Germans, Ottomans, Portuguese, Dutch and Spanish.) You advance through five different ages, all the way up to the industrial age while collecting food, water and coins (gold), the games three resources.

I found a lot of gameplay changes that are really helpful or at the very least, intriguing. First, resource collecting has been somewhat simplified, which is a very good thing. Villagers now do not need to return to a collection point like a town center, granary, lumber mill, etc. Once you put one to work, they just continually collect the assigned resources with no long revolving lines of villagers going back and forth from resource to drop off buildings. Further into the game, mills and plantations and such can be created to provide resources from an unlimited supply, as with the earlier games.

Another significant new addition to the game, at least on the surface, is the concept of "home cities." Essentially, every civilization has its own home city, represented by that nation's capital city over in Europe. Depending how well you are doing over in the "new world," the home city will be able to send you resources, reinforcements and more as you earn them. The cities can be tweaked and modified to operate as you see fit, so the system is relatively customizable, though they do not have too much of an effect on the meat and potatoes gameplay. Very little time or attention is spent on the home city until you've earned up enough experience to ask the home city to deliver to you its goods.

Another interesting idea is a twist on the concept of queuing units. Yes you can queue units in lots of RTS games, including Age of Kings or the Rise of Rome expansion for the first AOE, but here you can actually build up to five of the same style unit at the exact same time, rather than simply ordering that five units be built one after another. This helps speed up gameplay quite a bit when you can have literally dozens of units being produced simultaneously assuming you have just a few of the right buildings and of course, the necessary resources. Streamlining issues like this is a very good thing in this gamers mind.

The problem here is that Age of Empires III did very little to try to fix some of the annoying problems of the first two games. Wielding large, diverse armies, while very important in order to out-number and overwhelm an enemy, are incredibly troublesome and difficult to operate. When attacking, cavalry units should swiftly slice through the lines of your enemy and cut them to pieces from their rear or center, perhaps even getting through to their weaker archer and siege units. Instead, they move at the same pace of their army, even in the heat of battle, not just when moving from point A to point B. Plus when they do clash with enemy units, they just stop dead in their tracks and start hacking and slashing, completely ignoring any advantage of the fact that he's on a horse and the other unit is likely not.

There should be a difference between a "moving" command and an "attacking" command, where moving simply asks them to move in formation to a designated area, where a slower pace is acceptable, and attacking would ask them to separate a bit and charge the enemy at the best speed that each unit is capable of. After all, when you attacking you do not want your cannon to march straight into the middle of a battle along with your foot soldiers, you want the soldiers to move forward and leave your cannon in the rear to bombard your enemy from a distance. To make matters worse, as soon as your units are engaged, it is essentially a free for all. All you can usually do is throw your blob of soldiers into their blob of soldiers and hope that your army outnumbers theirs or is at least better trained (more upgraded) perhaps. This makes the strategy element very difficult and frustrating to execute.

Additionally, and you RTS fans you will understand what I'm talking about, the micromanagement can still be a bit overwhelming at certain crucial times in the later stages of a match. Essentially while your out fighting the battle/war of your life with an enemy, your can't help but pretty much ignore your economy back home. While this has been much improved through the simplified resource gathering, your economy can and still will require lots of attention from you (even when fighting large, time consuming battles elsewhere) or it will wither. It is very hard to recover from fighting a very lengthy battle to look back at your economy and have to play catch up, all while your opponent is preparing to send another army against you.

What I found in Age of Empires III is mostly a mixed bag. Like a trick-or-treat bag that, when opened, you discover your old favorites like the Reese Cups, Kit-Kat's, skittles, etc. Of course then you get the endless tootsie rolls, generic suckers, and all the wrong flavors of jolly ranchers, not to mention the prerequisite weird homemade stuff that the cheap family at the end of the block passed out in little sandwich baggies. I very much like the new additions and streamlining of certain complicated and time consuming portions of the game, as they certainly add to and aid in advancing the game play. The graphics are also beautiful, with realistic reflective water, swaying trees, believable unit animations and detailed landscapes and structures. In fact, the visuals are too good. If there is one thing an RTS needs to have, it's a good frame rate, even on moderate to slower machines, and Age III does have a tendency to slow down at very critical points in the game which is extremely frustrating.

Other than having some of the standard problems that most RTS games struggle with, I found myself reasonably pleased with this effort but slightly disappointed in knowing that they could have done so much more that could have made this the new standard in good RTS gaming. Some annoyances aside however, this is an excellent game and a worthy addition to the series. If you are a fan then I am sure that you will enjoy this sequel. For the rest of us however, we should all just hope that the inevitable upcoming expansion pack is able to fix some of the short comings of this title to make it truly a classic for the ages:

Interesting score. I know a couple of my friends who would have you beheaded by now. lol

I'm not a big AOE guy though so what do I know?

Lol, I know a lot of people who would have me killed for that too. One of my friends has been begging me for the game once I finished the review. We've both been fans for years, him more than me. AOE came with my first pentium grade (Pentium II actually) pc that my family got as part of a "Microsoft Action Pack" (along with Close Combat), and I just loved it. AOE 2 wound up a lot like AOE III though, in that it was better, with more features and more stuff to do in different ways, but it didn't address the problems with the original. While certain issues can be ignored when a great new game comes out, a sequel being made with the same problems is less forgivable. I mean I really DID like the game, but when a problem or problems start to frustrate you to the point of ruining the game well, what can you do?

Great gameplay is created by the sum of it's various parts, and it doesn't take more than one part going really bad to really foul up the whole game, even if everything else is working perfectly. Oh well, my score was pretty close to the gamerankings.com average. I didn't think it should be in the C range, but I did think that it only barely deserved to be in the B range so I think an 80% makes sense.