Putting Beauty in the Beast

In the beloved Disney film "Beauty and the Beast," characters transform magically into clocks, wardrobes and teapots.

But when Cogsworth, Madame de la Grande Bouche and Mrs. Potts morph into these objects next weekend on the Lawrence Community Theatre stage, it won't be the work of fairy dust.

Unless you count the wizardry of costumer Annette Cook as magic.

"She's phenomenal," says 12-year-old Lexie Hofer, who plays an inquisitive teacup named Chip. "It's just amazing how she can do all that in that amount of time."

Cook has been working since early September to cut, stitch, tape, glue and otherwise construct close to 70 costumes for the theater's production of the Tony Award-winning musical. She did it all for around $2,000, relying heavily on fabrics and trims donated to the theater after a fire there in late 2003.

Annette Cook is designing and creating the elaborate costumes for Lawrence Community Theatre's production of "Beauty and the Beast." Cook works on the Feather Duster costume while the outfit for Mrs. Potts, played by Cook, rests in the foreground.

"It's been interesting, to say the least," Cook says while scurrying around the theater basement strewn with costumes-in-progress. "Then I have double duty because I'm Mrs. Potts at the same time. It's been crazy."

Cook has created the costumes for most of the theater's productions for the past four years, but never has a show demanded so much imagination - and so many unusual materials.

Take her own getup.

Cook built the bulb of her teapot from hula hoops, then stretched a thick layer of foam rubber over the top and covered it with panels of fabric on which she'd appliqued a china pattern. She used the same process for her spout - minus the hoops - and slathered it with a healthy veneer of a hardener called SculptOrCoat.

"That's the hardest part is to keep my arm up for two hours," she says. "So I made it like a cast."

To dream up ideas for the show's elaborate costumes, Cook revisited the Disney film and looked at pictures online.

"Because of Disney regulations, you can not copy exactly what they have," she says. "But I have a pretty good imagination, so I just go with what hits me."

What hits her, of course, has to help tell a story that has endeared itself to generations of viewers. 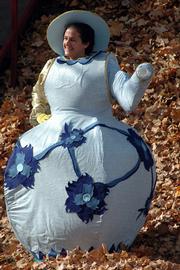 Cook tries on her Mrs. Potts costume, complete with a raised teapot spout.

Beautiful Belle and her inventor father, Maurice, live in a provincial French village populated by ordinary people. One day, while lost in the woods, Maurice seeks refuge at a castle.

But this is no ordinary castle.

An enchantress cast a magic spell on the chateau and the prince who lived there when he turned away an old beggar woman. As punishment, the prince becomes a hideous beast, and all who live with him are turned into household objects.

To break the spell, the beast must fall in love with someone and earn her love in return - and he must do it before the last petal falls from the Enchanted Rose.

Attempting to rescue her father, Belle ends up at the castle, where she agrees to stay with the beast if he releases her father.

Happily ever after soon follows.

Some of Cook's most ambitious costumes will cloak the beast's staff. Cogsworth, the time-conscious head of the prince's household, becomes a clock. To make the three-dimensional ticker, Cook used pink, foam housing insulation to build a box coated with fabric and SculptOrCoat, complete with a faux-glass door that contains a swinging pendulum.

Lawrence attorney Charles Whitman, who plays the role, counts himself lucky to be among the most mobile of the big objects. But it's going to be steamy for him and his cohorts onstage.

"Lighting is very powerful in almost any theatrical setting and, as a consequence, puts out a whole lot of heat. They run the air conditioner in the theater even in the winter so the patrons can be comfortable, but it doesn't help as much on the stage," Whitman says. "And if you're wearing anything bulky, cumbersome or enclosed, you collect all that heat from the light. 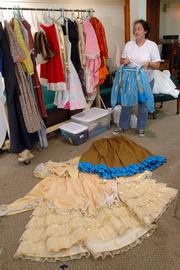 Annette Cook has created dozens of costumes for Lawrence Community Theatre's production of "Beauty and the Beast." Cook worked Tuesday in the theater's costume shop at 1501 N.H. In the foreground is the yellow gown worn by Belle, the show's heroine.

Indeed, says John Phythyon, who plays the love-struck candelabra Lumiere. Fortunately for him, his costume is foam-free except for a pair of bulky gloves with battery-powered candles flickering at the tips.

"I keep joking with the actors who are playing the objects and the guy who's playing the beast that we need to go to Wal-Mart and buy a hundred of those little hand-held fans because the costumes are so hot," he says.

Mary Doveton, who's directing the show, says the theater's modest size precluded her from renting costumes from another company.

"Even with these, I'm somewhat limited in what I can ask the actors to do because they won't fit through all the entrances," she says. "We've got a couple of people who are going to have to go through things sideways."

Also competing for space on the theater's postage-stamp stage will be a coffee grinder, egg beater, plates, flatware, salt and pepper shakers, a footstool and the tea cart that will conceal all but Chip's head as she rolls from spot to spot.

"It's very claustrophobic, and if you stay in it for more than five minutes, it gets really hot," says Hofer, of Leavenworth. "But I'll work through it.

"I love 'Beauty and the Beast.' It's my favorite movie of all time."

She's not alone in her love affair with the story. Kendra Verhage, who plays the coveted role of Belle, went with Cook to buy the fabric for her character's ball gown.

"She showed me the pattern in the store. It was the most amazing thing. I started crying right there," the 19-year-old says. "She worked so hard. I know it took exactly three days."

One layer of the intricate dress is made from ruffles of Indian lace encrusted with tiny seed pearls that wouldn't go through the sewing machine. Consequently, Cook had to hand-pleat each layer.

"It came out gorgeous. It's absolutely beautiful on her," Cook says. "It's every little girl's dream to wear that yellow dress and to find her prince."