Scripted events prove to be immersive

Don't: Throw a grenade when trying to throw a health pack

The Xbox has become the first console to make first person shooter games enjoyable. These games range from the pure visceral experience of Doom3 to the slow and tactical Rainbow Six series. With all the high quality titles that are available for shooter fans on the Xbox it is easy to overlook a quality title, but Call of Duty 2: Big Red One is a title that any self respecting gamer should experience. For PS2 shooter fans, this is a no-brainer.

Big Red One puts the player in the shoes of an untested private in the battle hardened 1st Infantry Division known for the large red one on the arm patch. This division has been the first to fight in the two different World Wars and you are there for many major encounters of World War II. Through the single player you will travel through thirteen levels that move from Africa to Italy to France covering many major turning points in the war. You will fight against the Afrika Korps, the Italian army, and participate in the invasion of Omaha Beach. Through the single player campaign you will get to know the different men of your squad and see how the camaraderie builds between the men. 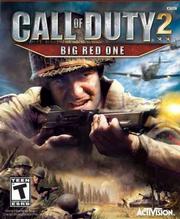 This game at first seems to take a step back in game play because it is extremely scripted with no explorative elements involved, but you will quickly forget this as you are sucked into the constant battles and firefights. When the developer takes the ability to run off and do nothing away then he is able to present an engrossing and fast paced narrative that should capture anyone's attention. This game moves quickly from one fight to the next and never lets up except for some oddly placed on-rails sections. These sections are the biggest detractor from the single player because they slow down the action and do not seem to fit in with the rest of the game. These firefights are treats in and of themselves also because all the weapons react differently and have strengths and weaknesses to learn. This game has no aiming reticule like a few other war games have done (though it can be turned on). Though at first no reticule can be hard to, it quickly becomes obvious that a patient and deliberate player will be more successful. This is due to the fact that without using the ADS (Aiming Down the Scope) most of your shots will not hit; though the controls are responsive and allow the player to change the sensitivity of the x and y axis aiming. The game does not allow for custom controller setups though it does have a few setups to choose from.

Activision and Treyarch took a chance with this extremely scripted game and would have failed had they not been able to nail down a visual and audio presentation that was as engrossing as the story. Though this game will not win awards as the prettiest game on current consolesit does capture a dirty and gritty feeling more than many other games have been able to. There are explosions all over the place that are enhanced by a smoke and particle system that really can be quite impressive. Often I caught myself admiring how the smoke and dirt clouds dissipate after an explosion because it was so much better than anything else I have seen on console shooters. The environments in the single player are adequately desolate and destroyed, though you can do little destruction yourself.

Further enhancing the game is the constant sound. There is always some background fighting sounds that may at times make you think that you are getting shot at because of how accustomed you are to taking fire from enemies. On top of that there is almost constant chatter from your team mates and the amazing weapon sounds that increase the frenzied feel of the firefights. All of this sound can at times almost be an overload, but surely war isn't easy sailing either. Also the voice work is some of the best ever done. The actors, which include many Band of Brothers veterans, deliver their lines with convincing emotion. The orchestration of the soundtrack is quite impressive also, however, about the only time you will really notice it is during the main menu and loading screens because all the other audio tends to drown it out. This is too bad too because it has great brass parts that can be quite a treat to hear. The only problem I had with the audio is at times there were hiccups where the sound stopped and started again, but these were very few and far between and therefore did not cause much distress.

So the game has an engrossing story, an adequate control scheme, an appropriate visual presentation, and amazing audio; but how does its multiplayer stack up? Let's just say it could take some serious time away from your other favorite games. Though none of the modes are original to this game there is Deathmatch, Team Deathmatch, Capture the Flag, and Domination (a game type much like Territories on Halo2); they are all quite entertaining to play. This is due to the quality level design and weapon balance. All of these levels have choke points that are the easy and fast way from point A to point B, but there are also longer and more obscure routes to all points in the map. Also, most of the maps are either levels taken from the single player campaign and slightly changed, or places that could easily have been in the game. I did not find a map that I totally disliked, though some of them were not of the same quality as the others. Multiplayer does throw in a class based system, but to unlock the classes you first must acquire a certain number of points. This works well because it rewards the more skilled players and coordinated teams. There are also some basic server options, but not really anything fantastic. The game does not support text messages, voice messages, or clans.

Overall, Call of Duty 2: Big Red One succeeds. It presents the player with a rich story mode, tasteful graphics and sound, and a multiplayer element that isn't the best but holds its own due to quality level design and weapon balance. This game may not completely steal you away from your favorite game, but it will provide a great respite until the Xbox360 releases.