Not too much better on the DS

Can't hold a candle to: Turtles in Time

Theoretically, TMNT3: Mutant Nightmare could be a great game. Konami still has control of the license, and they put out the classic Ninja Turtles titles on the NES and SNES. While the 3D versions on the consoles may be understandably disappointing, surely another side-scrolling Turtles game will be great, right? Well, not really.

Castlevania: Dawn of Sorrow proved that a 2D game could be amazing on the DS without relying too heavily on touch screen gimmicks. Unfortunately, TMNT doesn't follow suit, as all of the touch screen utilization is extremely lackluster. The most frequent use of the touch screen is to summon fellow Turtles. Depending on the situation, one of the icons on the bottom screen will flash. When pressed, a Turtle will help you attack all the enemies onscreen, lift you to unreachable areas, or help you activate switches. It's fairly annoying to constantly have to press the touch screen, especially in the middle of battle. Even worse, the buttons emit a shrill beeping sound that gets old in about 3 seconds. 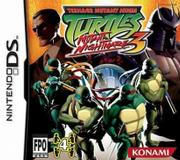 Other touch screen elements present themselves in the form of simple puzzles to open doors or activate computers. They're very simple, and usually require you to turn a valve, arrange some colors, or assemble a shape in a certain amount of time. Again, this is highly unnecessary, and I wish the developers hadn't been concerned with forcing touch screen usage.

Battle is very simple, especially considering that there is no "up and down" movement within the 2D plane. It's just left and right, followed by mashing the attack button when enemies arrive. Like countless brawlers before it, TMNT features a special attack button that is very powerful but takes away some health when you use it. Certain levels will feature your Turtle escorting other characters such as a robot and Splinter. The worst levels are those with sections that require you to swing-jump off of poles. Controlling your jump while swinging is horrible, and will constantly cost you health by falling onto traps. There are a few vehicular levels, and these are far more entertaining than the standard levels.

Graphics look very similar to the older games, and feature almost nothing of note. There are a few 3D elements in the background, but nothing visually striking or impressive. The audio hasn't improved since the SNES either. Come to think of it, neither has the gameplay. In fact, it's markedly worse. Most levels feel similar to the one prior, and repetition and monotony will set in within the first half-hour of gameplay. A possible rental for hardcore Turtles fans (do they still exist?), but certainly not worth a purchase.