The fun doesn't last as long as the title

Teenage Mutant Ninja Turtles 3 Mutant Nightmare definitely tries to connect with the animated series. The game plays like three interactive episodes of the series. Those familiar with the show should have no problem with it, but I haven't watched the turtles since The Secret of the Ooze, so I didn't know who Dr. Honeycutt and some of the characters were. I also wasn't aware that April had made the career move from TV reporter to engineer and antique shop owner.

You get either cartoon or game rendered cut-scenes between some of the missions. This would have helped connect the game to the series if the video was good quality, but as it is, I felt like I was watching the scenes through dirty bathwater. The rest of the game doesn't have that same muddy look to it, but the graphics are nothing to tell your friends about. If you've seen either of the previous Turtles games, you've seen this one too. That being said, there were several areas during the game where I could not even tell where my turtle was and if I was attacking a Triceraton or one of my friends. The camera didn't help me out much either with that. There were a few times where I would be fighting and a wall or building would block my view, completely leaving me vulnerable. 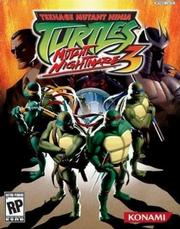 The sound is pretty annoying as well. I ended up turning on my iPod and just turning the sound down to zero. I sure do miss the original Turtles theme song after hearing the new one and the similar music that permeates the game.

The gameplay is pretty easy to master. You've got your weak attack, strong attack and block buttons. If you like hitting the same buttons over and over again for hours on end, you'll feel right at home here. After defeating each enemy, a crystal of varying worth pops out. You can use these crystals to upgrade your favorite Turtle. You can also find Ninja Scrolls throughout the game. For serious fans of the series, these additions will greatly increase replay value and overall play time. One thing that really bugged me about the game was the fact that during the action on some missions, text would pop up on the screen completely killing the flow of the game. Load times and constant saving also disrupted play. During one of the inane cutscenes Raphael asks why they were just sitting there twiddling their shells. I definitely know how he feels after playing through the game.

There are several different modes that you can unlock throughout the game. If you want a change of pace from mindlessly hitting Triceratons with your sais to reach the next level, you can choose to play in Free Battle mode where you mindlessly hit Triceratons with your sais, or other weapon of choice. Free Battle mode does offer a good way to increase your Turtle's strength if you are trying to upgrade and find Ninja Scrolls.

Most of the modes that you can unlock aren't that great, but I have to give props to Konami for putting the entire SNES game Teenage Mutant Ninja Turtles: Turtles in Time on the disc. I still have my original Turtles in Time game, but this is a great pickup for anyone who played it the first time the Turtles were popular. Unfortunately, after playing Turtles in Time again, you realize just how little the gameplay has changed even after almost fourteen years.