A long time ago, I had a creative writing teacher who gave us an Ernest Hemingway short story to read. I forget which one.

For the next day's assignment, we were supposed to come up with a list of excess words. After about 30 minutes, we realized there weren't any.

Hemingway, my teacher explained, knew how to wring words.

The same can be said about Eliza Gilkyson. Among today's crop of folk singer-songwriters, she's a Hemingway.

"I'm really a stickler when it comes to any deadwood," Gilkyson said during a recent telephone interview from her home in Austin, Texas. "Every line needs to pack a wallop."

Here are a few lines from "Man of God," a track on "Paradise Hotel," the latest of her 13 CDs:

"You never have to tell them how the money's spent

You never have to tell them where their freedom went

Eliza Gilkyson will perform at 8 p.m. today at the Bottleneck, 737 N.H., with Mary Gauthier. Her "Land of Milk and Honey" CD was nominated for a Grammy in 2004.

Homophobes in the high command

Hide all the bodies from out of view

Channel all the treasure to the chosen few"

A fan of President Bush she is not.

"I've taken some hits for having written that song. A lot of people don't want to hear it," said Gilkyson, whose "Land of Milk and Honey" CD was nominated for a Grammy, best contemporary folk album, in 2004. (She lost to Warren Zevon's "The Wind").

"I'm not a confrontational person by nature," Gilkyson said. "But I really don't want to look back on this time period and feel like I just sat on the sidelines while everything I held dear was threatened."

To be sure, "Man of God" cuts deep, but Gilkyson doesn't mock.

"I'm wrathful," Gilkyson said. "But I don't snipe; I don't make mean-spirited jokes (about Bush). I think that's petty in the face of what we're dealing with."

"I don't need to alienate people," Gilkyson said. "I'm just trying to rally my own troops. I find myself putting myself out on this limb right now and I really don't enjoy it that much. But I really feel a need for it. It's a strong passion within myself to stand up for what I care about."

But as Gilkyson is quick to point out, her songs - her concerts, certainly - are hardly confined to Bush and politics. 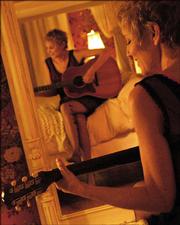 "My shows are not deadly serious by any means," she said. "Mostly we have a lot of fun. I like to tell stories, we laugh a lot."

Gilkyson has stories to tell. Her songwriter father, Terry Gilkyson, wrote "Marianne" for Harry Belafonte, "Memories Are Made of This" for Dean Martin, and "Bare Necessities" for "The Jungle Book" movie soundtrack. Her guitarist brother, Tony Gilkyson, spent 10 years in the quintessential punk rock band X.

She's been through her share of broken relationships, failed marriages and parental regrets. She's wrestled with her demons and carted more baggage than she cares to think about.

At 55, Gilkyson isn't shy about talking about her age.

"I used to not bring it up," she said, "but a lot of young women who come to my shows, I think, are looking for role models. So I've started to think of it as a responsibility. Women are made to feel that once they hit 50, they are truly not desirable and not of value. I hate that; it's so wrong."

"We're a good pairing," Gilkyson said. "We're not the same, and yet there's something connected in what we do. We share some sentiments, but our styles are utterly different."

Both will perform solo.

"It's going to be about the songs," Gilkyson said. "We've talked about it. We're both going to throw down our best and see what happens."