Gets lost in a Dawn of Sorrow

Go with: Castlevania: Dawn of Sorrow for the DS

Ten years ago when Sony and Sega were just launching what would be the 32-bit generation of consoles a debate raged between both fanboys and developers about the fate of 2D gaming in the 3D age.

Now, a decade later it's easy to see which side won. While several franchises have made the jump into the third dimension rather gracefully (Mario, Zelda, Ninja Gaiden and Metal Gear) some haven't. Castlevania is one such franchise.

With a pair of undercooked games for the Nintendo 64 and last years PS2 offering, expectations for 3D Castlevania games aren't exactly high. That said, Castlevania: Curse of Darkness is still a disappointment.

In Curse of Darkness you play as Hector, a Devil Forgemaster and former agent of Count Dracula. Appalled by the evil of his master, Hector swore to never use his powers of darkness again. He held true to his vow for four years until his rival Isaac reemerged with a plan to resurrect the Count. Hector is left with no choice, but to go back on his promise and practice the dark art once more. 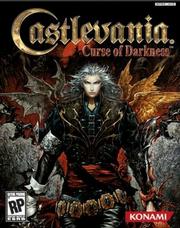 That's all very compelling, but how does it translate into gameplay? Being a practitioner of the dark arts has its perks. Hector can conjure various Familiars or "Innocent Devils" to aid him in his quest.

These Familiars all have different abilities that come in handy during Hector's pursuit of Isaac. Your Fairy specializes in curing magic, the Lava Golem is an ally in combat, the Mage has access to black magic and the Crow and Devil allow our hero to access areas otherwise off limits.

During battle commands can easily be issued to your Familiars via the D-pad. Set a Familiar to Automatic and they will target individual enemies, heal Hector and perform special attacks when they see fit. Set them into Command and they assist Hector in fighting one specific foe (their special attacks are also at Hector's disposal in this mode). Finally, set them in Guard mode and they put up a force field that Hector can freely move in and out of to avoid excessive damage.

Even more, these Familiars all level up and learn new skills along the way. Once they've reached a certain level of experience they undergo a physical change that is dependent on the weapon Hector is wielding.

This adds a nice level of customization to the game. Progression through Curse of Darkness almost requires the use of a Familiar and being able to mold them to combat-specific needs makes for a richer experience.

In fact, if Castlevania: Curse of Darkness can be praised for anything it's the large amount of customization options it offers. Items found on fallen enemies can be combined with other items in your inventory to produce new weapons or armor.

There are four distinct weapon types (sword, axe, spear and hand-to-hand) that have their own positives and negatives. Depending on the size, swords and axes can be used either quick and effortlessly for light damage or swung slowly with more devastating effects. Likewise, spears have an extended reach, but are weaker. Hand-to-hand weapons deal the smallest damage, but are among the fastest in the game.

While the Devil Forging and Weapon Master systems are well done, the combat system they exist in is not. You're given a single attack button that produces a five-hit combo. Each step in the combo can be interrupted by pressing the Finishing Move button, which changes the nature of your attack in a variety of ways.

The problem is, that in order to allow room within the animations to hit the Finishing Move button at the proper time, Konami has slowed down the combat to a crawl. This extends to all weapons, not only the heavier axes and swords.

In the Devil May Cry/God of War age of 3D action games, this simply won't do. Where those games speed along like fine-tuned sports cars darting in and out of the frey, dodging enemy projectiles and countering incoming attacks-- Castlevania: Curse of Darkness handles like a 1985 Ford Taurus. Once a combo has been initiated there's no interrupting it to block or dodge, Hector just plods along until he has finished the move set or been hit by an enemy that would've been easily avoidable, otherwise.

Worse yet, Curse of Darkness is plagued by one of the worst Lock-On systems ever experienced. Haters of the targeting system in GTA don't know how good they have it. The problem with the Lock-On system is a simple, but major one: it doesn't lock-on. It highlights the target, sure, but it doesn't make it any easier to focus on that specific enemy. Hector still swings in the opposite direction or starts fighting another, closer, foe. The targeting reticule also fades out, so it's possible to locked on to an enemy and not even know it. Worse yet, it gives the camera fits, making it jump or spin around for no apparent reason often leaving him to blindly swing at an enemy that may or may not even be there.

Outdoor areas are interesting. The forest and aqueduct sections are both wide-open and full of enemies, but the indoor stuff all feels the same. Areas offer limited interaction and basically involve Hector jogging down the same hallway over and over fighting enemies strategically placed in front of the door he needs to enter. Enemies make return appearances throughout the game and the soundtrack, while interesting at first, becomes a grating mix of Old School Nintendo riffs and synthesized orchestration.

Visually, the game looks like a first or maybe second generation Playstation 2 or Xbox game. Textures are low resolution, character designs are simplistic and uninspired and the game employs very few visual effects on par for this generation of console development.

There are a few impressive moments within the game. The battle with Death looks like a psychedelic runny oil painting and all of the real-time cutscenes are well done, but those moments are too few and far between to make any significant difference.

If Curse of Darkness had been released as a launch game it would have earned higher marks. But clunky combat, uninspired visuals and recycled enemies and areas are unforgivable at this stage of development. Maybe things will change with the new batch of consoles on the way, but for now stick with the 2D Castlevania games, they're infinitely more satisfying.